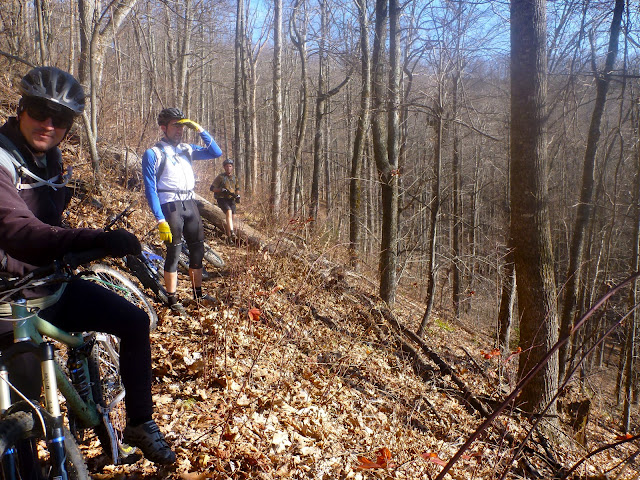 9AM on Saturday morning came early for me and I sent out a text to Mike R. 'Running 10 minutes late' I said. A minute later the reply came back 'No Rush'. Excellent. That was going to be the theme of the day. I arrived at Yellow Gap at 10 after in frigid conditions to a fun crew assembling: Mike R., New Guy Chris, Eric C., and Jared C. We were on our way by 9:30 but as soon as we hit the woods we took our first break, we were all overdressed, the temps were rising quickly.
Mike C and Eric C. took the lead for the climb with me following. There WAS a bit of a time constraint on us though, no rush was not quite true, so we didn't regroup again until the meeting log. Jared was the last to the log and had pretty much decided by then that he was only going for the first leg (Laurel->Pilot) of the ride. After the meeting log I could hardly hold sight of Mike and Eric and for a great part of the time it felt like I was riding by myself, or with ghosts. We regrouped and took an extended break just before the steeps though and I was able to hold on after that. 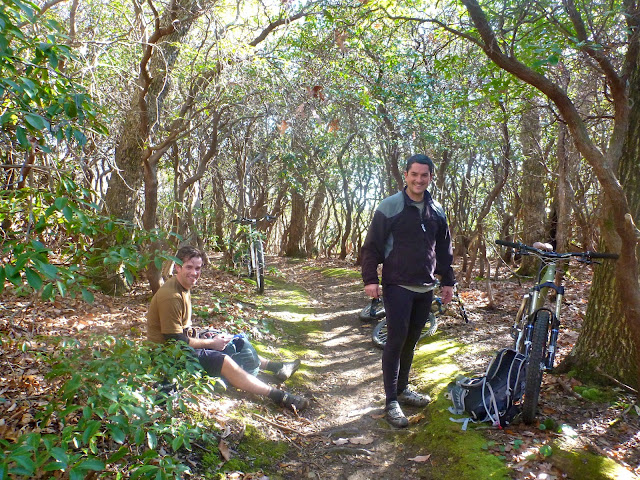 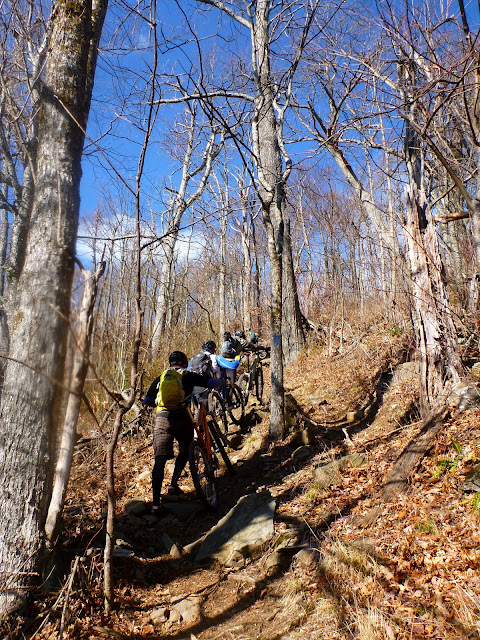 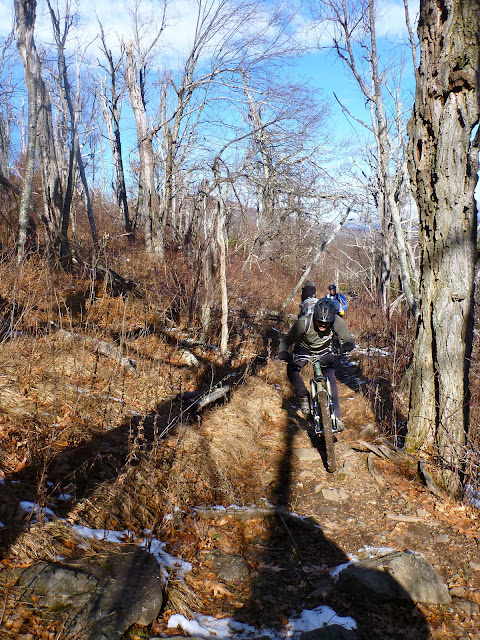 The group arrived at the Pilot connector together so we just continued on to Pilot for the next break. By this time I was really missing my granny gear (I was on the 1x6 Green Machine) and watched as Mike and eric both almost cleaned all the way to the next intersection. Great climbing fellas. Just as we were finishing our first lunch break Mike P. arrived on the scene. I had facebooked with Katie M about the ride and Mike picked up the chatter and decided to hop onto our ride. He had started at the bottom at 9AM and caught us at Pilot. I warned him that the pace may be a bit slow for his liking but if you know Mike then you know his answer: 'That's allright, I'm just looking to have some fun'.
As we lined up for the downhill something strange happened. Mike R did NOT take the lead position, He ceded his normal place in line to New Guy Chris! OK NGC, let's see whatcha got! Well, what he's got is downhill skills. Following Mike R following NGC was a hoot. We were absolutely FLYING down that mountain. We slowed at the triple switchback but didn't stop until the big overlook down below. It was a spectacular run. 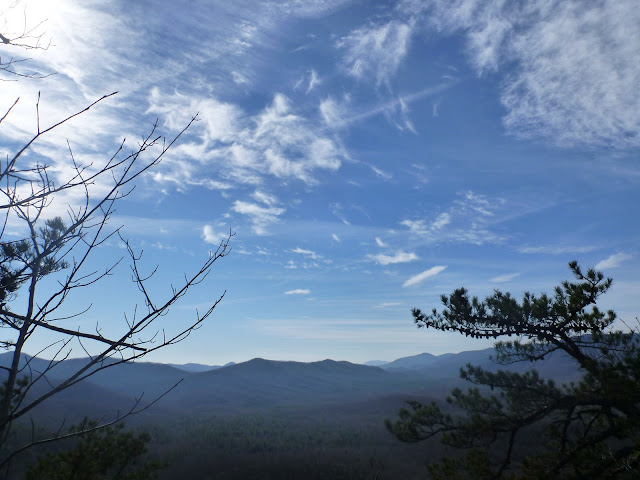 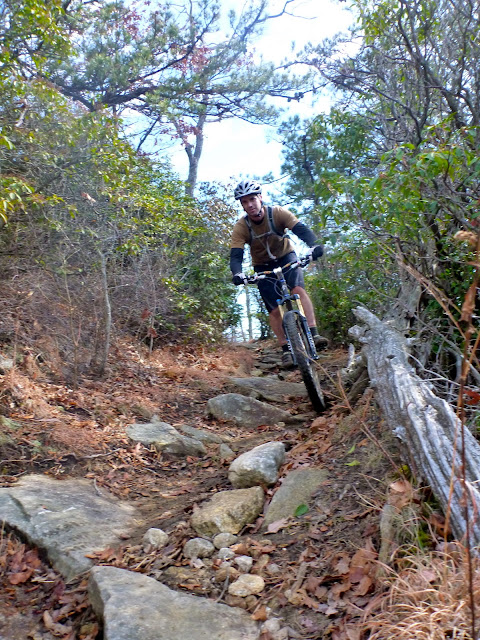 We regrouped (holy hell Mike P was next in line on a full rigid!), took a few photos of the view, then railed to the bottom. Eric C had gone ahead to get photos from the Hum-Vee section and caught me floundering through it but that was probably my only 'Off' line of the day. I was feeling pretty good at that point. Three switchbacks and a few long straights later we were filtering water out of the creek at the bottom. 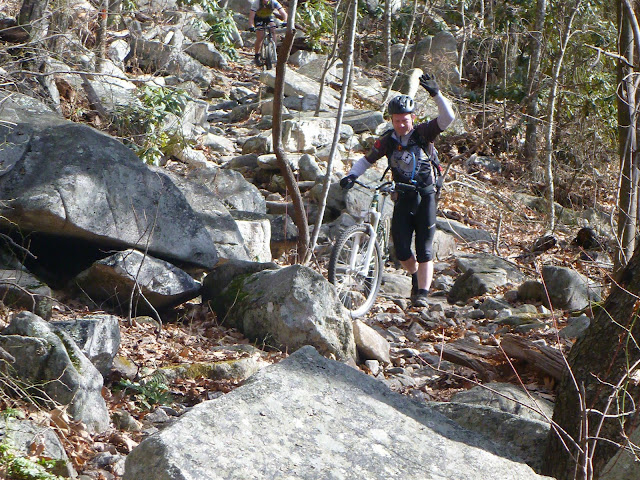 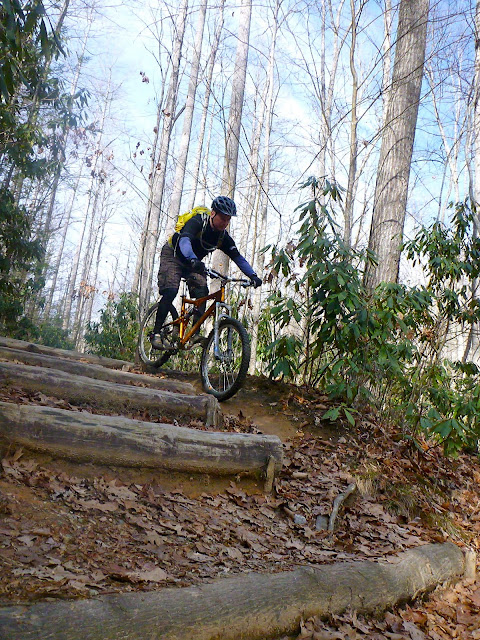 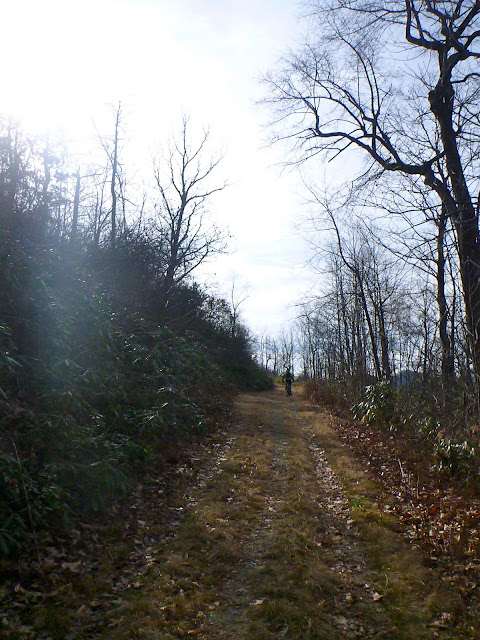 We bid adieu to Jared there. He took 1206 back to Yellow Gap, we went the other direction: 1206->Horse Camp->5018. I was surprised to find that none of the group had been on Horse Camp as it's a great little singletrack that cuts off probably a mile of gravel road but now they know. Mike P. (as the only singlespeeder) hopped out front for the 5018 climb. It didn't take long before I was trying my best to hold on and he was my rabbit for the entire climb. We stopped for a regroup at the overlook but otherwise pressed on in great time to the top. 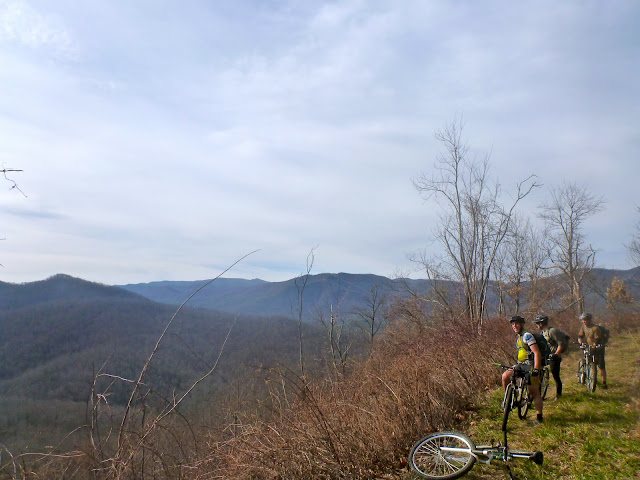 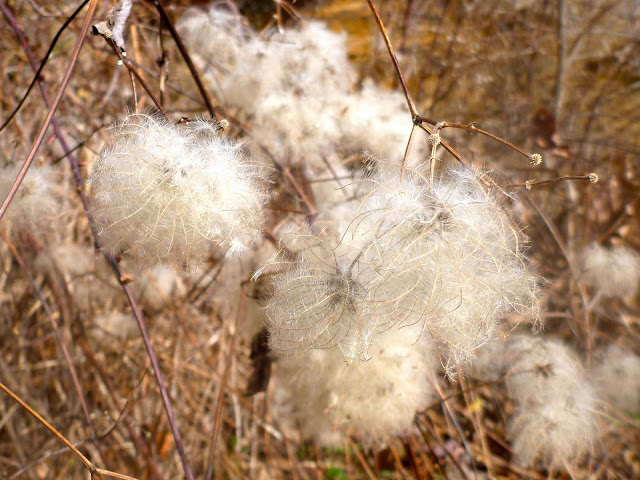 Mike P. was just soft peddling, too. He would look back, smile, then come up with conversation that was just him talking and me grunting. Thanks for the Yes or No questions Mike! My head would have exploded if I had to form a sentence. 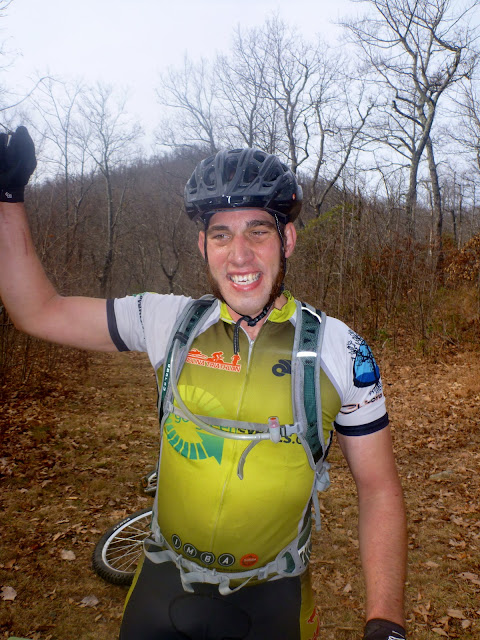 New Guy Chris was starting to really feel the miles at the top of 5018 so we took an extended break there. Mike R. and I explained that what was next though was one of the very best ribbons of singletrack in the ENTIRE UNIVERSE and spirits remained high. 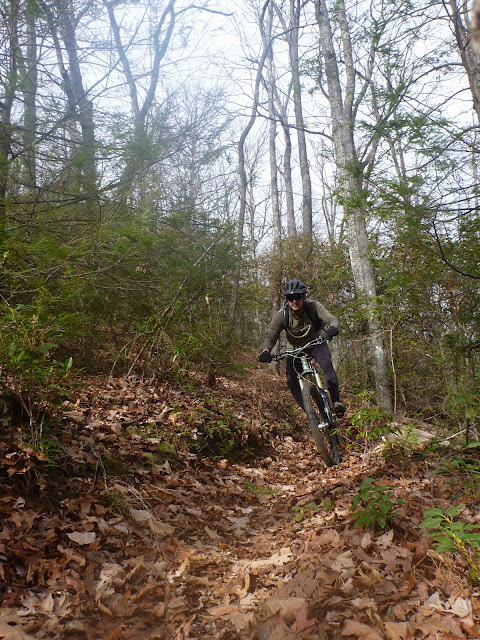 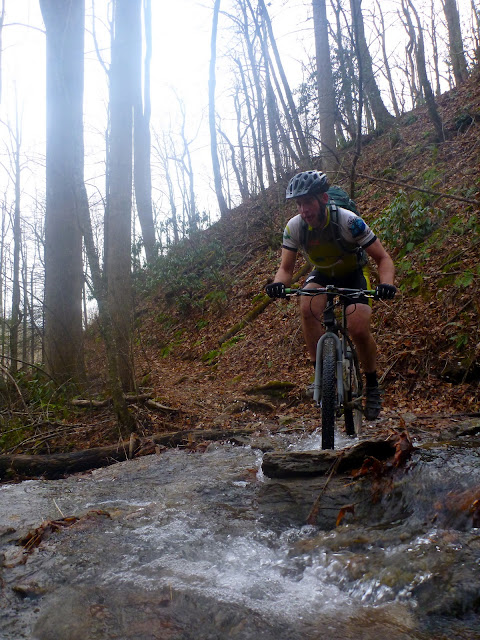 Squirrel Gap did not disappoint. I was in the lead position from Horse to Cantrell and the Green Machine was riding like a dream. It STILL is my favorite bike at the moment. Mike led out after Cantrell with the pledge of 'no dabs til the gap' and we tried our best. Two dabs later (and a total time warp for me as Phish was noodling away in my right ear and I followed every line Mike R took) we arrived at the gap. After a quick regroup and a few Hell Yeah!s we were headed to Laurel Creek. When we stopped briefly at Pounding Jill NGC looked like he had just had an epiphany, had seen baby Jesus, and maybe dropped some acid. 'Wow! That is the best singletrack I've ever been on!'
Yes Chris, Yes. Yes it is. 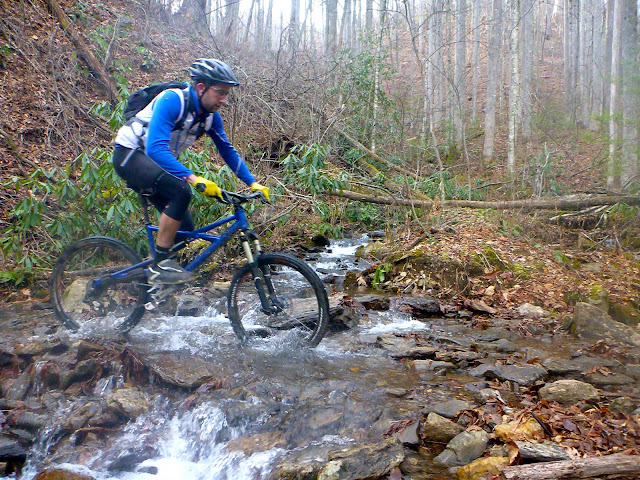 Mike was first down Laurel Creek, I was second, NGC was third. Even though Chris was starting to bonk good it was impossible to shake him. Did I mention his downhilling skills? Well we regrouped for the final time at 5015 and the guys were settling in for another extended break. 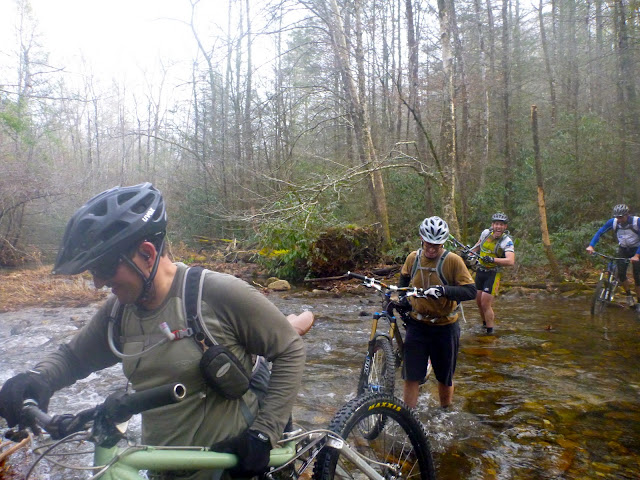 Chris asked about the time and was floored when he heard 3PM. Talk about a time warp, when pressed he said yeah, I figured it was about Noon or so. Well, I had a 4PMish curfew so it was time for me to get going. I wasn't looking forward to climbing out of there by myself so was happy to see Mike P cranking along about 10 seconds behind. I told him that my legs were shot and if he wanted to just get out of there I understood, there was no reason to wait for me. After a moment of consideration he said 'No, It's more fun to ride WITH people... and I'm just out to have fun'. Spectacular. 5015 was then very similar to the 5018 climb. Mike talking, me grunting. He was my rabbit to chase and even with me dead legs we were at 1206 in just over 30 minutes, one of my fastest climbs out.
Thanks for the great ride everybody. Perfect company, perfect trails, perfect day to be in the woods.