Ride #4 You're doing it wrong. 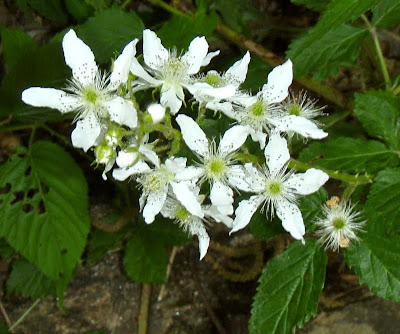 Well, I sure have been slacking lately when it comes to riding my bike and updating this here ride log. I've gotten in four rides in the past couple of weeks and will try my best to recall them now. Let's start with yesterday's ride: Jody F. had invited a huge crew out to White Pines for his 40th birthday celebration weekend and after a night of whooping it up (drinking Mike B's keg beer and watching the most serious game of corn-hole I've ever witnessed) the morning broke and a ride plan was conceived. Jody F., Mike B., Jonathan L., Justin M., Park B., and myself finally got rolling around 11:30 am for Avery->Black.

Avery Creek to Black Mountain from pisgahproductions on Vimeo.

It took only about two hours to figure out how to create that rough vid in iMovie. This mac beats the crap out of any PC I've used.

I had never ridden UP Avery and now I know why. The climb was relentless and there are easier and more enjoyable ways to make it to Club Gap. Along the way we lost and found Tomato, watched Park drag a tube change out for 45 minutes (hardly exaggerating) only to have it go flat again 5 minutes later, and bid ado to Park who was then questioning our sanity for continuing to the ridge despite the rumbles of thunder and cracks of lightning that surrounded us. It was a hot and muggy day and all I could wish for was the sky to open up, which amazingly it did not do until the last half hour of the ride. 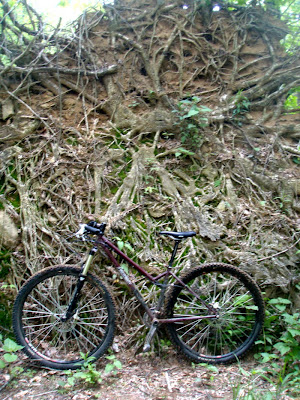 The thunder surrounded us for the entire ride. Around to the shelter followed Club and the lack of water consumption (and the abundance of beer consumption) was catching up with me. I was having a rough go at it by the time we reached the shelter and thought of dropping clawhammer back to the camp but pressed onward to Clawhammer and Black mountains. My legs were then starting to cramp and I had consumed 100oz of water and just before the Black peak I declared that I had indeed reached that point of no return, I was bonking. I watched as everyone pulled away on the descents, passed a broken down Jody who mumbled something that I didn't register until Spencer Gap, and was inbetween the rest of the riders that had continued on Black and Jody behind. I realized Jody said 'broken chain' as I had passed, I waited for about 10 minutes, the rain started, I knew we were behind our three hour goal, and I decided to bail down Maxwell to finish the ride. I got back to camp and explained the situation and about ten minutes later the ahead crew arrived, sans Jody. In the end Jody made it back about 20 minutes after everyone else... he had more mechanicals along the way. No problem though, nothing like an introspective walk by yourself in the rain on your 40th, right? Thanks for having a birthday Jody. It sure is better than the alternative! Oh, and here's a photo from later of Mike B and Sohiedog enjoying the day: 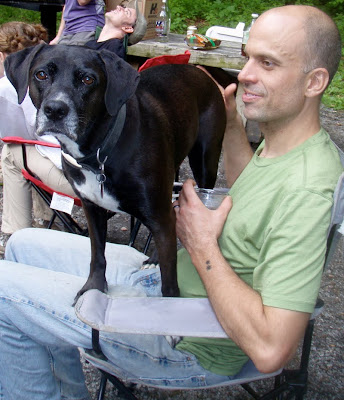 Zoe and I arrived at White Pines on Friday evening and waited for Erinna to finish her 38 mile 4900' climbing pavement/gravel ride from West Asheville to White Pines. Mike B., Jonathan L., and myself then decided it would be a good idea to get a bit of low-land night riding in before the keg beer began to flow too liberally. I've got to say that what came next was the best night ride I've been on in ages. We climbed 477 to lower Buckhorn to lower Avery then took Avery to 477 then back to the camp. We stopped for a minute at the top of the gravel climb to take a quick breather then hit the singletrack with huge smiles. Mike and I decided to ride without lights as much as possible in the near pitch black darkness.
(there's a reason this photo is funny that I'm not going to mention) 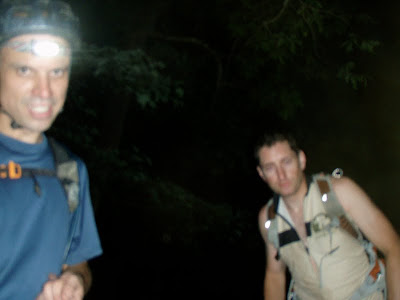 The sight of our shadows dancing off the trees ahead, being illuminated by Jonathan's low powered light, was a beautiful thing. Watching as Mike and I outran the light was downright trippy. We would use the power of vampire vision (which tomatoes obviously lack) to negotiate the twists and turns of lower Avery and pull away from Jonathan until we were riding like stealthy ninjas. Silent. Invisible. There was nothing guiding us but the Force. I took an unsurprising spill near the end of the single track but other than that there were no other unscheduled dismounts. On the way back to camp we were laughing, already trying to remember quotes from the ride, and again riding without lights. What we saw next will hopefully stick with me forever: Hundreds and hundreds and hundreds of tiny specs of light floating just above the surface of the earth all the way up the hill as far as you could see. They outlined the curvature of the terrain, a thousand points of light. Fairies dancing in the still of a warm Spring night.


Ride #2 This is why I write this stuff down.
A week had passed since PMBAR and I had yet to get on my bike. I had sourced out the pickup of the last checkpoint and was otherwise feeling overwhelmed with the enormity of the tasks ahead of me. Everything needed to be aired out, the garage needed cleaning before PMBAR could return to it's storage for the year ahead, the house was a hot-mess, the basement needed more attention than the garage, and I needed to get a quick ride in or I just might have cracked. Saturday afternoon I got out to Bent Creek for a ride with Sophiedog. My route: from the new parking lot->gravel->Ingles Field->Tony Michaels->Greenslick->Sidehill->Little Hickory->Ingles Field->Hardtimes connector->back to the Jeep. It was about 12 miles of fast fast fast moving. Maybe even a little too fast for Sophie. I didn't have my camera along but I did have my new GPS. Unfortunately the GPS would not communicate with my computer afterwards so there is no visual representations of this ride. Out of the four rides I'm writing the details of this are already slipping my mind. I need to write this stuff down as soon as I get home. 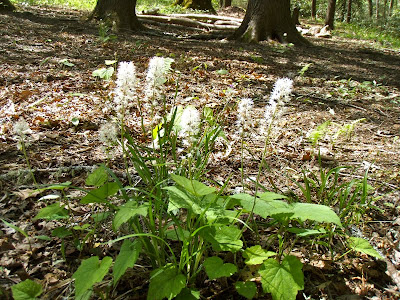 DjD, Sophiedog, and I got out a couple of days before PMBAR with a mission other than having fun on the bikes: Setup two PMBAR checkpoints.
The CPs weigh about 20 or so pounds each and as we suited up in the Turkey Pen parking lot I could see the concern in Dennis' face. He had never ridden with such a heavy load and was commenting of how his tires and fork felt squishy under the increased load. We took the singletrack down to the bridge to test the pack's hold on the gear then headed S.Mills to the bottom of Cantrell. 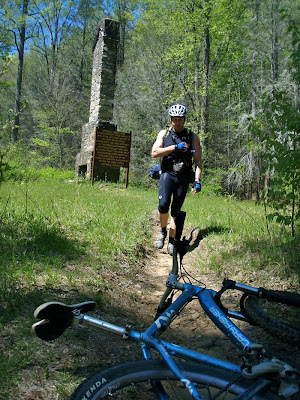 Our route for the day: SMills->Cantrell->Squirrel->Laurel Creek->Bradley Creek->66 jumps back to the parking lot. 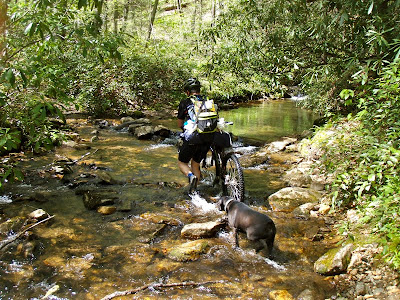 The climb up Cantrell went by much more quickly than either of us expected as we chatted the entire way up the hill. The CP setup also went very quickly and with half the load on each of our backs it felt like I had wings and flew down Squirrel to Laurel. Down Laurel to Bradly where we setup the second CP (photo of the 1st CP) 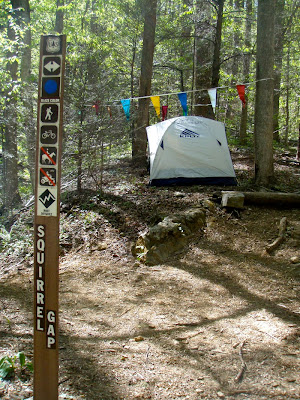 and after the slightest breather we were headed back to the Jeep on Bradley. Again, many of the fine details of this ride have slipped into my overall consciousness of Pisgah riding. Stuff happened. Fun was had. 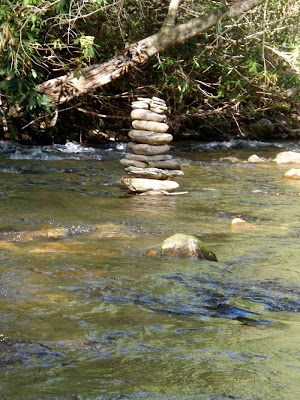 We got back to the Jeep in great time and high-fived in the parking lot saying YEAH! that was a good time. Mission accomplished.

OK, that was an epic one-draft post, I'll do better in the future about not getting behind.

One more! Erinna just finished her first iMovie project. Behold, the cuteness that is our baby: 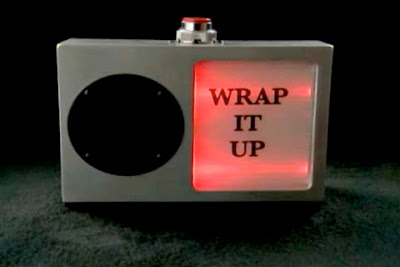 Ever wish you had one of these?

Posted by Eric Wever / Pisgah Productions at 6:49 AM 1 comment: