What is a quick definition of mountain biking? 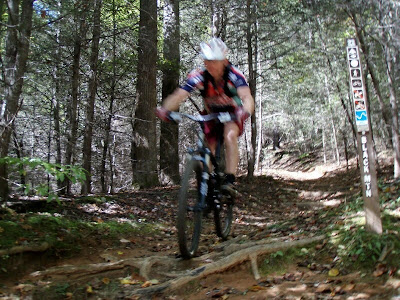 No, not blurry pictures...It's riding bikes over, around, and on mountains. Douglas H. and I got out for a great ride today that fit that definition perfectly. It couldn't have been a better day for it, too. Temps starting in the 50's and topping out in the high 60's, zero humidity, and bright blue skies. 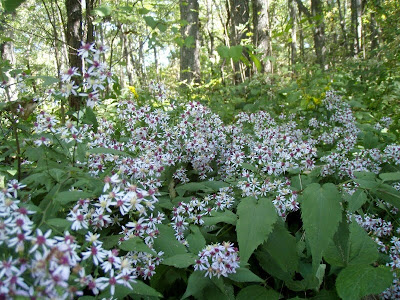 I was supposed to show Douglas a route for his upcoming group ride but... we ended up going much further than originally anticipated. The ultimate route: from the PMBAR start/finish->276->477->Avery Creek->Buckhorn Gap->477->Buckwheat Knob->Black Mountain back to the vehicles. 17.5 miles, 3950' climbing. 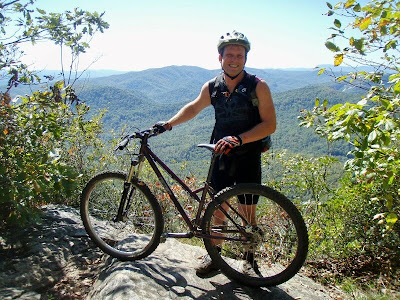 We started with a swift pace up the pavement to 477. Then a couple of miles of gravel to Avery Creek trail. A perfect warm-up. Right about the time I was thinking it had been a loooong time since I had been back there I took us on the first Buckhorn trail I saw. Well, I had planned on going the other way on Buckhorn Gap to Clawhammer->Black->back to the vehicles but *gasp* I made a navigational error down in the soggy beauty and didn't realize it until we hit 477. 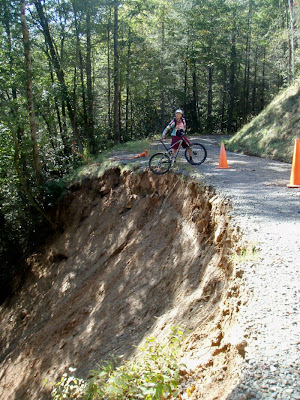 477 is NOT clawhammer. I asked Douglas if he was in for a longer ride than planned and with a big smile he said he was game. Next thing I knew he was climbing away from me on 477. He was always just a switchback or two ahead but it was apparent he's been spending some time on the road bike. I had to drop into granny and give up the chase at one point but immediately, around the next corner, he was doing a trackstand and was waiting for me. Class. This man ooozes it. 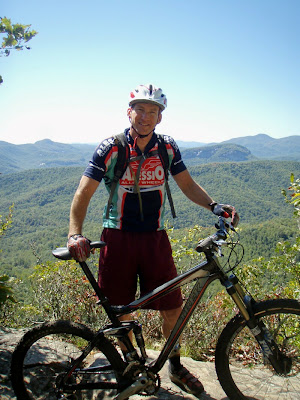 Thanks Douglas, that was a huge boost seeing you right there.
Next was Buckwheat Knob... UP. A first for me. After explaining that yes, I do ride down that root-ball, I was regaining my push and likity-split, we were at Club Gap. 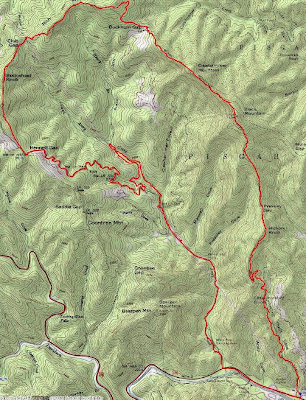 Saying it was just Black Mountain from there to the vehicles doesn't do the next two hours of riding justice. Include: Tech climbs. Tech descents. Whoops, hollers, and yeeeeaaaaahhhhhhhhh!!!!'s. We stopped and talked with a group of riders a Buckhorn Gap, then continued on Black. Douglas would take the lead on the climbs and I would on the descents. I was feeling ON FIRE descending Black. That trail is super-fast right now, a welcome change from the tech tech tech tech that we had experienced up to that point. The ride ended with the full speed ahead lower section of black and we were both railing the berms and having a great time of it all. a little less than 3:30 after we left we were back at the vehicles. No wrecks, No mechanicals, No bonks. What a great day in the woods.

Douglas, we need to ride together more often. That was awesome. You pushed me harder on the climbs than I have been pushed in a while and you were rocking the descents. Thanks for coming out.
Posted by Eric Wever / Pisgah Productions at 2:57 PM 1 comment: