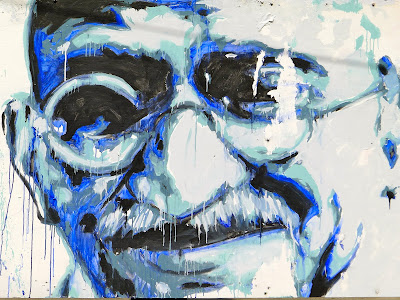 with Mike and Kassi. I tried to get out earlier in the day but bad weather was moving in fast. I mowed the lawn instead and the rain started to really come down just as I finished up. This isn't a lawn maintenance log though, it's a ride log.... About two hours after the storm passed Mike B. called asking if I was up for a ride. Erinna gave me the thumbs-up so off I went starting at 3:40PM.

As I mentioned, there were storms passing through so the humidity was 100% greater than yesterday but the temperature was just about the same, hovering in the mid 80's. We started with Meadow to A.B Tech because of a train passing through
Mr. and Mrs. BrownDay 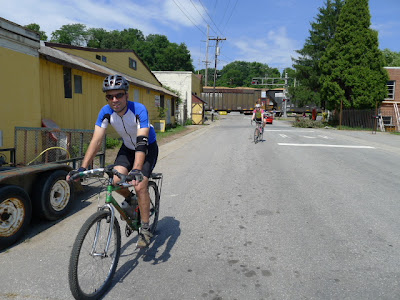 but were otherwise right back on course, headed through Kennilworth to Beaucatcher.
The Beaucatcher bridge 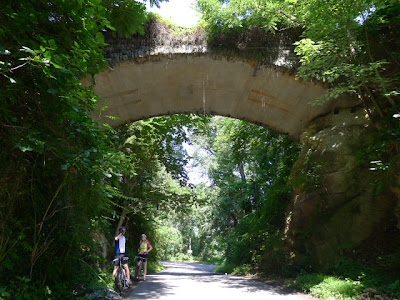 After those as-close-to-urban-asheville-as-you-can-get-rural-feeling-roads we crossed Charlotte street and were directly on more rural feeling roads, up Sunset to Town Mountain.
Sunset Rd 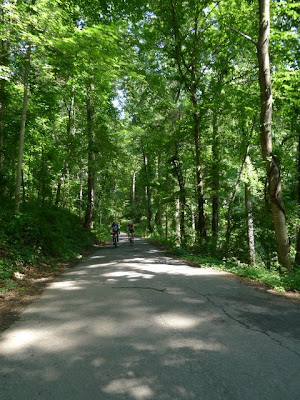 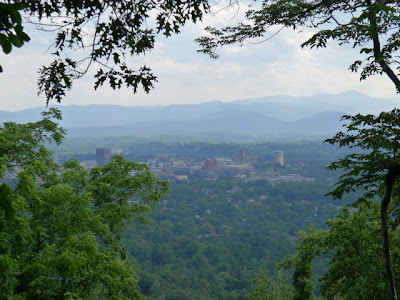 After a short bit of TMR we were readying ourselves for that stupid road I went down Monday night, Bartram's Walk to Wolf Cove to Beaverdam. The Droid stats say I got going 45.3 mph on that descent... (min grade 20%!) and when we got to the bottom I joked that we should ride back up, but there were no takers and really, we were all ready to head home at that point. Beaverdam to Merrimon was next, and I lost Mike and Kassi at Merrimon as I got the green light at the Ingles and they did not then they had different plans (they were heading to the Bywater) so when I saw them take a right a block before and 200' downhill from where I was I decided to just head on home. I picked up the pace once I was a solo rider and hammered to WT Weaver, through the college, past the Bywater, over the tracks, over the Craven bridge, up Waynesville(where I passed a commuter like he was standing still) and home to Westville. Great ride y'all! Thanks for getting out! Thanks for the invite!