Mike R. and I got out last night for, to the best of my recollection, a first for me: Farlow Gap at night. To make it even better we took the long way up (5003/140A). We met at Mr. Pete's at 6:30pm but were not on the bikes until minutes before 9:00. Why? Well as we were just about ready to hit the trail from Daniel Ridge parking lot I came to the sinking realization that my front wheel was in my Jeep.... at Mr. Pete's. Dammit. Well fortunately for me Mike does not seem to have buttons that can be pushed. No matter what the situation may hold Mike does not get flustered. Cool.... So when we got back to the Jeep and I said 'F*ck it, I say we head back out there' I was hardly surprised when he said 'Hell yeah, that'll make a better story anyway' 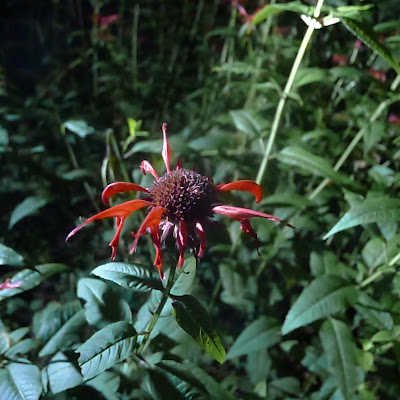 So at 8:55 we were on the bikes and headed to Gloucester Gap. Mike led out for the climb and I was having a good warm-up. I just about held his wheel all the way to the gap. We were there in great time, too. We took a quick breather but were headed up 5003 after just a couple minutes of a break. There's a thread going on mtbr right now that I wanted to participate in so our first destination was the intersection of 5003/140A. Points are awarded for the number of bikes, helmets, people, fun/odd photo features, and difficulty (remote location, night ride, etc.). The last folks left the game to be picked up there so off we went. 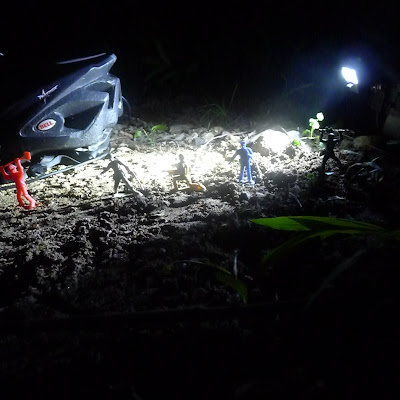 5003 also went by very quickly. I had taken the lead at some point and was feeling good. Mike wasn't rubbing my rear wheel either so the pace was set. With lights blazing, cutting through the cool humid air, it was like I was dancing with my bike. Every moment with full attention to detail but confident, cautious, and strong. I could stand and hammer, sit and spin, whatever the terrain demanded. Of course, when you're feeling like that it only takes a flash until you're at the next turn. We took the photos for the game and ate and talked and generally took our time getting out of there before heading up the much more tech, much more steep section that followed, 140A. Oh, I almost forgot, I saw a BOBCAT on 5003. It ran about 50 feet ahead of me for what seemed like 10 seconds. 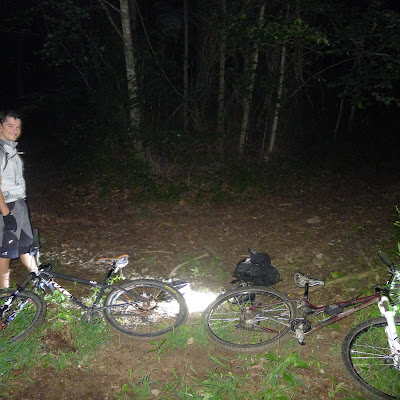 140A can destroy momentum and exuberance. I knew that going into it. I immediately switched to granny gear and started to climb. Well, that only lasted for a few moments before I was back in the middle with Mike in chase. We attacked every steep climb and honestly, almost cleaned the entire way to Farlow. We were both on fire and unwilling to submiss. What a great feeling to be able to stay on the bike on a trail that has had me off the bike and whimpering in the past. I started to lose Mike somewhere around Kissee Creek but knowing Farlow was just ahead I hung my head low and continued to hammer. When Mike arrived at the gap 2 minutes after me it was time for a longish break. 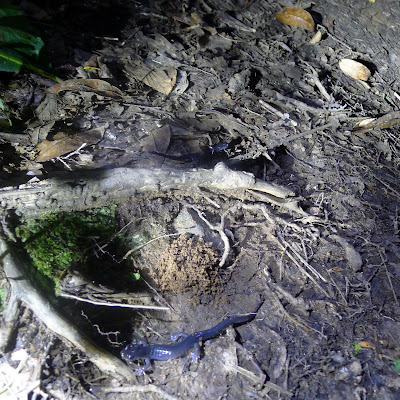 Ahead was the reason to climb the 9 miles to that point: Farlow Gap. Farlow is easily the most technical bike legal descent in Pisgah. The rock garden at the top is the stuff of legends and along the way there are sections so steep and ever changing that no one could say I can clean Farlow every time. This time Mike and I got through the rock garden with one dab each, flew through the mica covered camp, and absolutely cleaned the super steep rooty section before the waterfall. 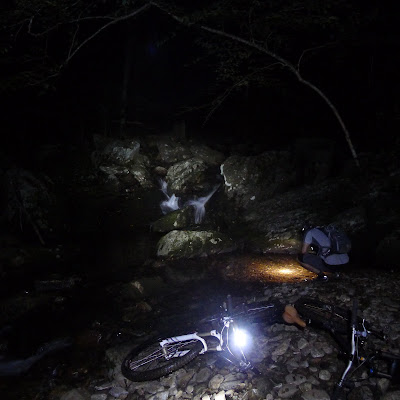 Following Mike was a trip. He is so fast and smooth it was like he could do no wrong. That changed once we were in the less steep/tech stuff. First we had a perfect 10 point dismount off the log bridge but next was the switchback steps of dooooom. He didn't realize exactly where we were, I did. He went full speed ahead around the turn and into the steps and I was following. Maybe he knew something I didn't I thought. Well.... no. The tone in his voice went from 'Oh Shit' to 'I'M GOING TO DIE' in an instant and he catapulted off the side. Since he did not get hurt all I can really say was it was a spectacular sight. 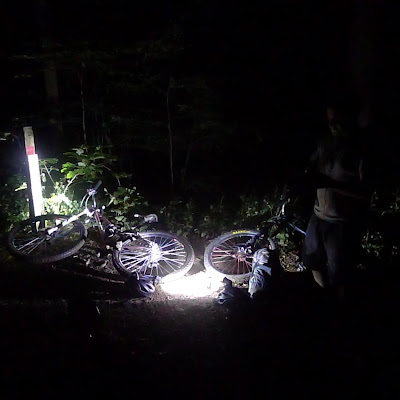 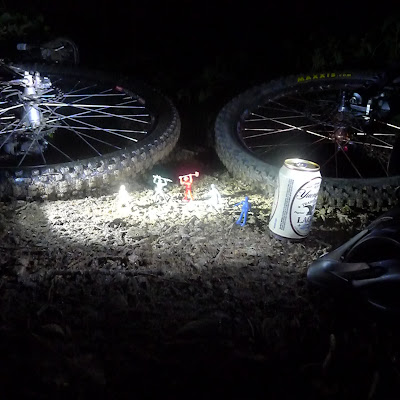