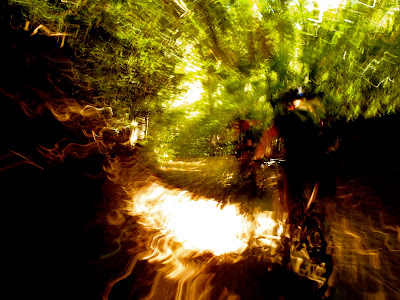 Scott from Indy and Paul from Canada arrived at my house at about 8:30 and we were on the road in two vehicles by 9:00. Why two vehicles for three people? We were headed to Wilson's for the XC shuttle ride: Raspberry->Greentown->Raider's Camp->Sinkhole. Along the way I texted Jody from Swannanoa and he was game, he would meet us at the gas station at exit 100 and join in the shuttling fun. 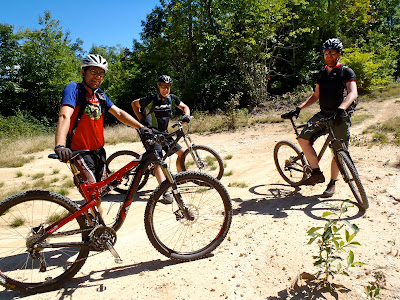 aaaaaand what a day it ended up being. To start the day off there was a semi overturned on I40. The accident must have happened minutes before because the backup had just begun for the westbound lanes. Once we made it to our riding destination we dropped the Jeep at the concrete bridge at Sinkhole then piled into the ICS shuttle van / mobile palace for the 9 mile uphill drive to the start.
We started to unload at the top I noticed something peculiar. Well, more like something straight up wrong, I had Erinna's front wheel. Shit. After a bit of hemming and hawing and rotor changes I was ready to roll with a much smaller tire than normal, a much thinner rim than normal, and a rotor that was exactly 10mm too small. Luckily Erinna and I both run 20mm thru-axles. Anyway, a bunch of freeride types walked out onto the road just before we left (one of them was wearing his little sister's jeans) and after some brief hello's and conversation about equipment choices our crew hit Raspberry full steam. 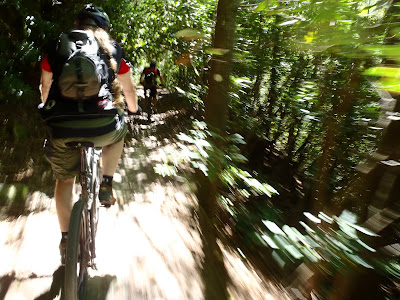 Raspberry is in excellent condition right now and Jody and I switched out who was taking lead. We stopped for a breather/checkup and the big bike guys were suddenly right there with us again. We took off as they regrouped but during the little ups and the technical sections we could hear the big bike guys right behind us. We stopped for a while at the jump at the bottom knowing they were going to hit it:

Skinny Pants on Raspberry 1 from pisgahproductions on Vimeo.

Skinny Pants on Raspberry 2 from pisgahproductions on Vimeo.

then proceeded to very quickly knock out the climb back to 181. After only the quickest breather we were descending the Greentown plunge. 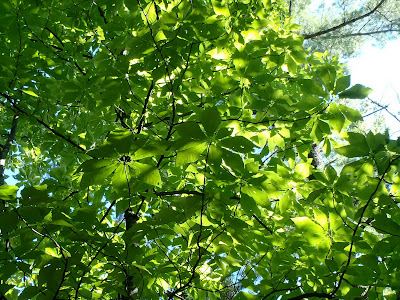 That trail is so super fast and so super tech and so much fun I won't try to put it in words. Raspberry is fast, tech, and fun. Greentown is fast, tech, and fun in a different way. We rode on the edge of beyond safe and really, any faster... you might actually die. OK, that may be a bit of an exaggeration, but not much. 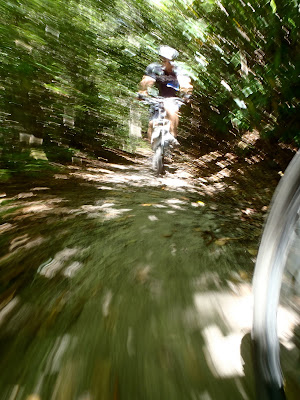 Then was the Old-Toll/Daniel Ridge area feeling climb back out from the creek and to our next trail of the day. The singletrack climb was a nice change of pace from the last gravel climb. Then... without much thought I felt my jersey pocket for my keys. Wait. they're not where I normally put them. It hit me like a blow to the chest, I knew my keys were in the van at top. I stopped, tore apart my camelbak, and then confirmed, I did not have my keys. The bottom of the hill shuttle driver.... shit.
I had been climbing with Paul when I made the discovery and told the others as soon as we caught up to them. Scott gave me a look like 'OK, what's the punchline?' and when I had none, the reality set in that we very well may be climbing the 9 miles of pavement back to the van after a 25 mile ride. I also informed them that was a 50/50 chance that I had a spare in my bumper. The thing was I could NOT actually recall putting the key BACK after the last time I used it. Shit. For the rest of the climb and for Raider's I was beating myself up inside and it felt like morale had dropped throughout the crew until Jody blurted out 'This may be the best ride EVER! I feel like I'm in Crested Butte'. I could see that everyone had absorbed the information well and that indeed, we would figure it out. 'I'll just thumb my way back to the van' Scott even said. Well, right about then we were near the bottom of Raider's and something again seemed amiss. See, this was the first time I had been the sole navigator for a Wilson's ride and suddenly things didn't seem right. A creek? Wha? I thought this just dumped out into the parking lot?!?!? Shit.
Then, across the creek I saw a rider. I splashed across then called the crew to cross. I knew right away we were on the right track. A group of CLT riders were regrouping after their own descent of Raider's and were also headed to sinkhole. As we were all together I noticed something very odd about one guys bike: 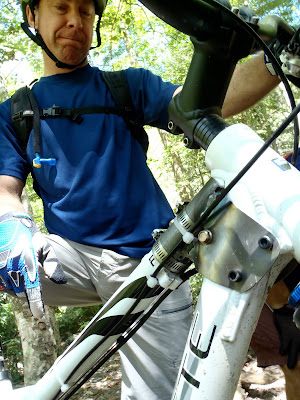 He had home engineered a fix for his broken frame! and was trusting it to stand up to Wilson's!!! He explained everything he had done and why he would trust it for another five years at least.... 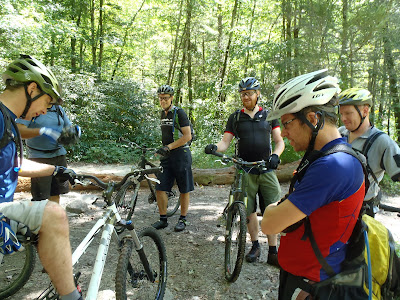 'Except this part here is a bit jigaboo'd up' and we were all in tears from laughing. Oh my god, did he just say that? 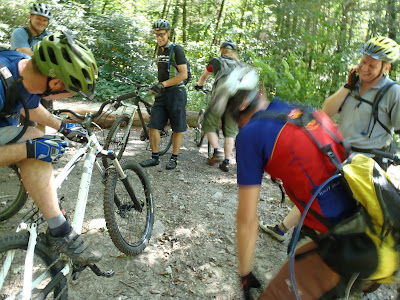 Once we were on the right track and headed to the parking lot all seemed right in the world. We all cleaned the lower nasty stuff, I had my directions memory verified, and there were people everywhere enjoying the absolutely beautiful last weekend of summer. Temps were in the 70's with bright blue skies overhead. 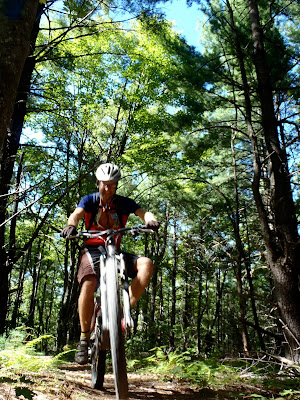 We stopped at the fountain for water and I made the climb to Sinkhole sound absolutely horrible just so everyone knew what possibilities lay ahead. (In other words, don't attack this climb, it's tough, and the nine miles back to the van ARE going to suck if we end up having to do it) We turned before the concrete bridge and were soon headed up to the saddle. Along the way my front brake was scrubbing the rotor (remember the wrong wheel/rotor issue?) and mechanic extraordinaire Scott took care of it. Then, without warning, without much conscious thinking, but with great meditation on the idea, it hit me like the opposite of being punched in the gut, I knew EXACTLY where the spare key was and EXACTLY when I put it there. YES!?! I told Jody but also told him to keep the revelation quiet, I didn't want to look like a flake x3 if by some off chance the key was not there. The climb to the saddle took exactly 2.5 minutes, or at least that's how it felt after the weight of not having a key to the Jeep was off my shoulders. We took a long breather at the saddle then were onward towards Sinkhole. I had told Scott and Paul along the way that I was saving the best trail for last and my route choice did not disappoint. Sinkhole is again different than Raspberry, Greentown, or Raiders. Steep does not adequately describe the terrain. Neither does backwoods, organic, or fast, fun, and tech. We oogled THE sinkhole, all cleaned the chute, were in awe of the knife's edge, and were laughing out loud by the time we hit the bottom. 100 yards later we were at the Jeep and it was the moment of truth..... drumroll please..... the spare key..... WAS THERE! Once we were loaded up and headed to the van Jody repeated what he had said earlier: 'This may have been the best day on the bike EVER!' Well, maybe so. Great people, Excellent terrain, emotional baggage brought and left behind, no bonks, no wrecks, no mechanicals..... Yes, I have to agree, that was one of the best days.
Posted by Eric Wever / Pisgah Productions at 6:46 PM 4 comments: