Sneakin' in one more before the end of the year... 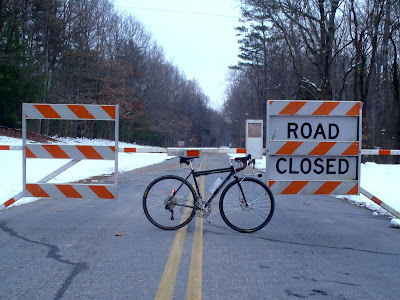 Knowing that the forecast is for rain and otherwise nasty weather for the next few days I decided to get out on the roadbike this morning. I donned every piece of winter gear I have and was on the road right at 7:40AM. My plan was the classic two hour ride. Right away I realized the roads were in much worse shape than I had noticed from the safety of my automobile and had to employ more concentration than I had anticipated. Once I was in Biltmore Forest I was able to ease up the tension a bit but of course, that's right where the climbing begins.
I made it through Biltmore Forest in good time and turned North on the parkway. I was immediately greeted by the first of a series of barricades that I would see while up there.
It was pleasant riding alone on the carless strip of tarmac that is the closed Blue Ridge Parkway. I even popped the NPR piping headphone out of my ear to hear the hum of tires on asphalt, the swish of my windbreaker against itself, and the rhythmic breathing I was creating on my own.
When I crossed the Swannannoa River a golden retriever came out of nowhere and gave chase. What's up with the attack goldens lately? I attacked the hill in front of me and thought about a comment left after my last ride. If he was on my heals when I looked back he was getting a squirt of water. I didn't want to dismount and start chasing a dog again. Anyway, when I looked back he was standing in the middle of the road 100 yards back. Get out of the road Buddy! Go home!
Soon after I reached another barricade just past the Folk Art Center. Well, that was the end of that road for me, the parkway was covered with a LOT more ice and snow than before. I guess they had salted up to that point. Since I was by myself I decided it probably wasn't best to try to descend Town Mountain anyway and turned back. As if to reinforce my decision a gentle rain started just as I got onto US70 at the V.A. I then turned on to US81 and followed the river: past the Mall Wart, the commercial sprawl, on to Meadow, past AB Tech, and back to West Asheville.
That will probably be a wrap on 2010 riding for me. 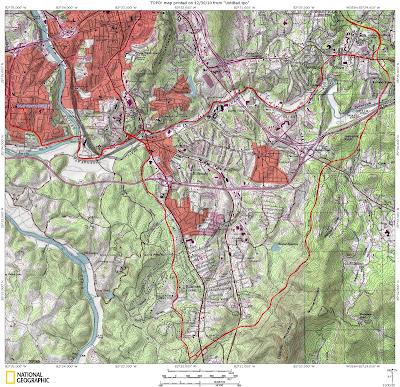 Posted by Eric Wever at 9:42 AM No comments: