It was a dark and stormy night...

Mike B. and I got out late last night for an excellent ride. From the Daniel Ridge parking lot->475->5003->140A->Farlow Gap->Daniel Ridge. 13.3 miles with 3766 ft of climbing.... or something like that.
Yesterday morning I read the Adventures with the Pisgah Gnome thread and decided it was time to get Sam on the move again. Erinna was at work until 7:30PM so I called Mike B and asked about a 8:00PM rally at my house. He was game and a little after 8 we were headed to Daniel Ridge.
We arrived to unexpected rain and no sign of the others that said they may or may not join us. After leaving a note for those that were not going to show we were headed up 475 with the rain breaking and beautiful orange crescent moon rising. We kept the lights off for the entire climb to Gloucester Gap and it was a great way to warm up. 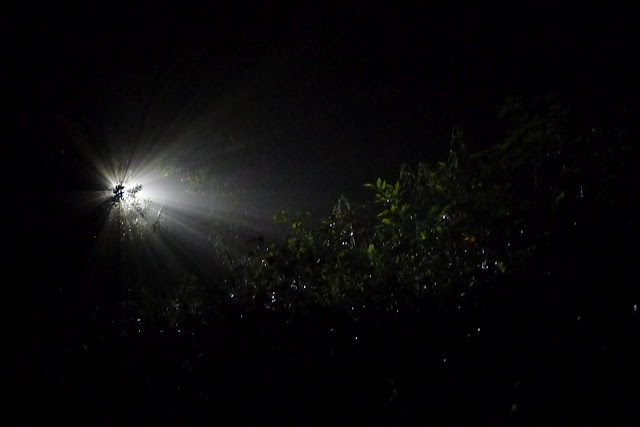 That first climb went by quickly and 5003 started out equally paced. The rain had soaked the trail and the line choices all included getting wet. You could take the track and ride in a flowing temporary creekbed or in the middle, in two foot tall wet grass. The temps were hovering right around 70* so the 10K% humidity didn't bother us at all.
We finally took our first breather about a mile from the turn so when we DID arrive at the turn we only stopped briefly for a few photos and to look at my phone to reference the photos of where the gnome was hiding out. 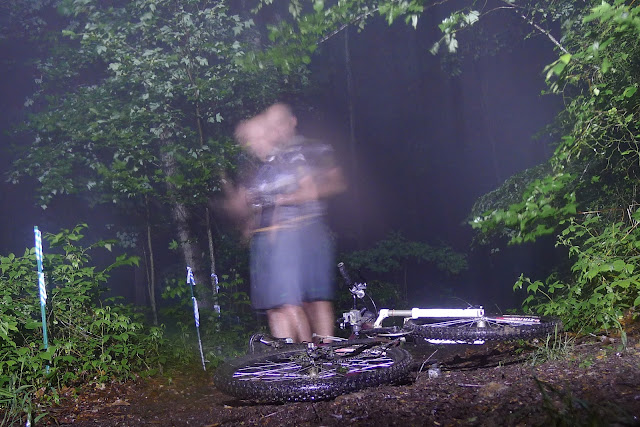 2/3 of the way up, look for a fork in the trail, at a shallow creek crossing look for a rock overhang 100' up and off the trail. Like we were ever going to be able to see 100' up the trail..... pfffft. Without much hope that we were actually going to find the spot we dropped into the granny and started the much harder climb up 140A. We held together for the first mile or so of 140A but fatigue started to set in on me and Mike slowly pulled away. We stopped and regrouped a couple of times 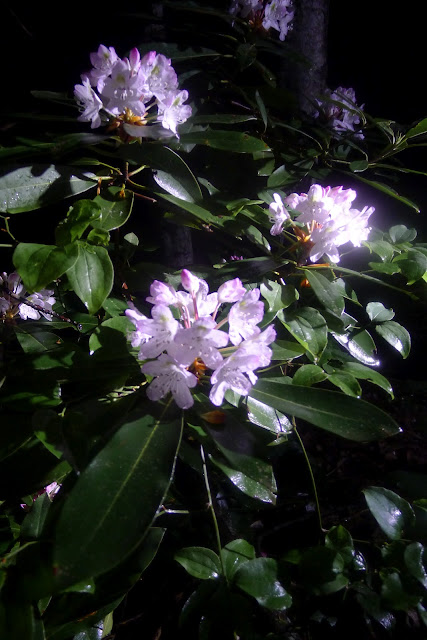 so he was never too far ahead, 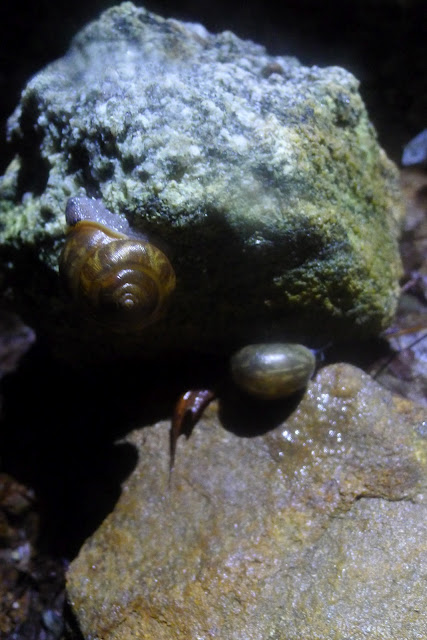 and I would catch glimpses of his light, but I was just trucking along at my own pace, looking for the fork in the trail. I didn't see that but I did immediately recognize the shallow creek crossing from the photo. I yelled forward and Mike was climbing over a log 100' ahead so he heard my call. 'I think this is the spot!' and Mike came back up to where I was standing, verified my thought, and we were off the bikes.... Gnome Hunting.
I scrambled up one way through the stinging nettle. Mike another. The spot was beautiful with plants of all sorts and moss and rocks and roots under foot for every step. 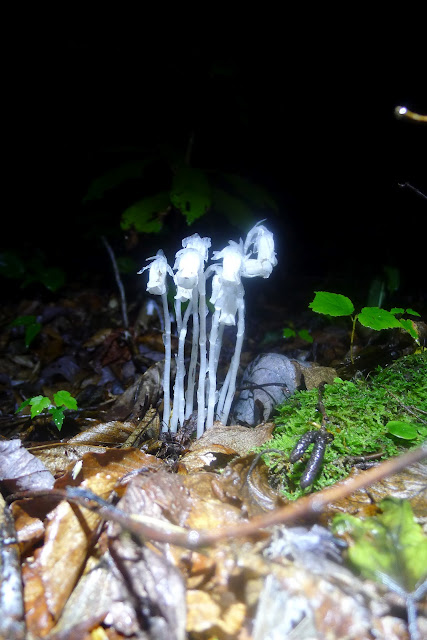 It took only about 5-10 minutes for Mike find the out cropping and another 5-10 for me to plod through the moss covered rock field between me and him. A little more poking around and Voila. We found him. Time: 11:00PM 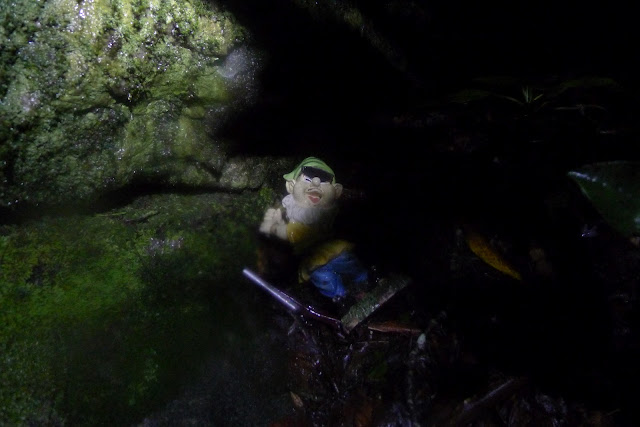 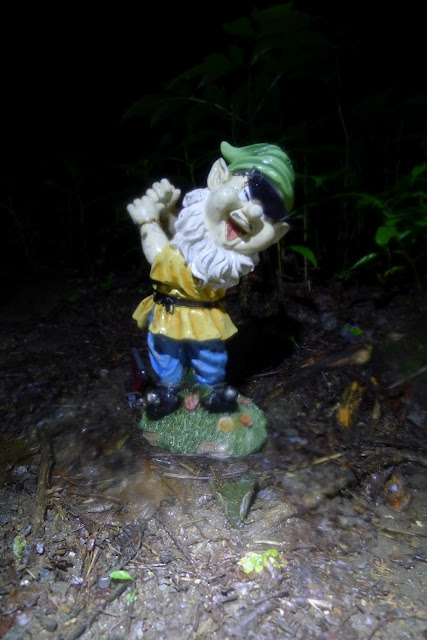 I strapped Samford onto my back 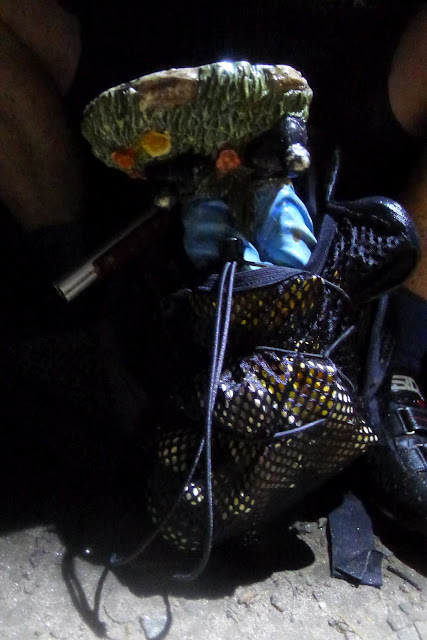 and we were at Farlow Gap about 35 minutes later. We took a longish break there 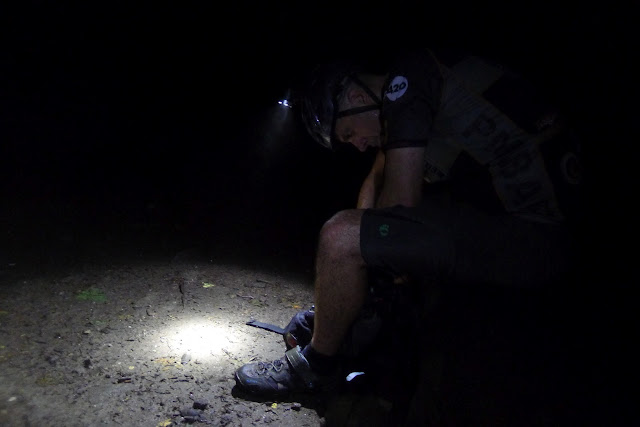 then headed down one of the gnarliest chunderful trails I know of, here or elsewhere. We made the promise at the top though that there were to be no big moves or big risks, that as wet and late as it was we needed to just keep two wheels on the ground. What followed was some of the best mountainbiking I've experienced in years. Slow tech rock gardens with roots more treacherous than the rocks that normally would be the reason you need to worry. Slippery when wet. It's great to have friends that seek adventures like the one we were on last night. Anyway, Mike made the suggestion that Samford the Gnome should hang out below the waterfall on Farlow so once we got there we hiked down the SUPER sketchy trail to down below. We instantly found his new home then scrambled back out of there. 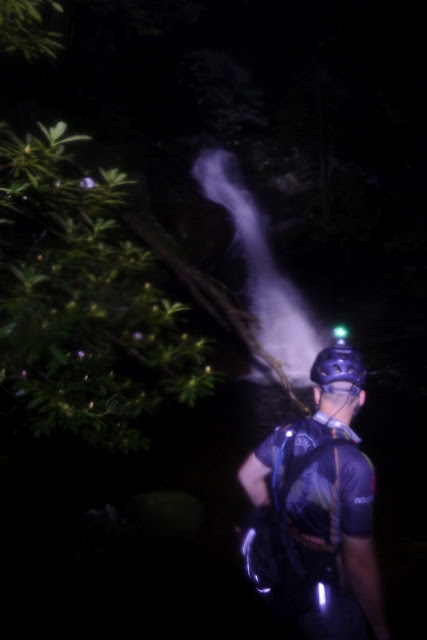 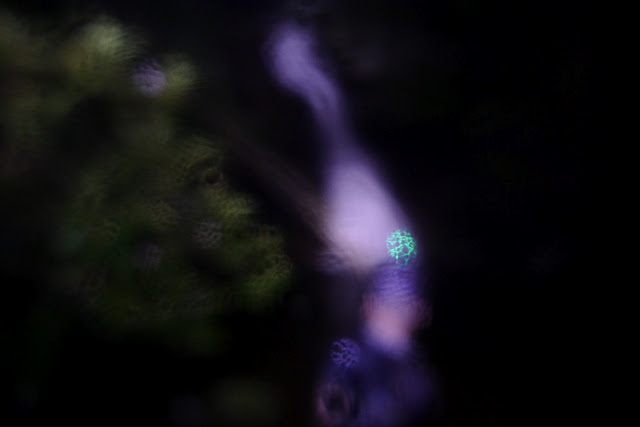 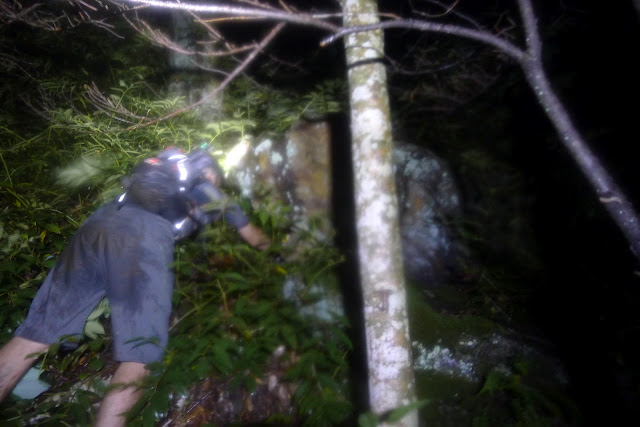 We found a much easier way back up the sketchy trail than the one we used to get down then continued on Farlow. Up through the camp then onto the relatively easier lower section before the steps. We both said NO WAY to riding the steps then climbed through the last creek and were on our way to Daniel Ridge. Again I was thinking that these trails, right then, were some of the best anywhere. Mountainbiking at it's very finest. As we descended Daniel we became immersed in fog and to say the descent was a challenge would be an understatement. We arrived safe and sound though and crossed over the big bridge and back into the parking lot just over 4 hours after we started. Not bad for my first REAL mountain ride since my last crash plus gnome hunting and hiding and the fact that we were finishing up past 1:00AM! Thanks for getting out there Mike. That was fun.