Well, that was fun. Rich came up to Pisgah this AM with a new group and Mike & Kassi B., and I (plus Avery and Maximiliandogs) met them out at the Fish Hatchery at 11:00. The route for the day ended up being an excellent tour of the best known fish hatchery area trails: Davidson River->Cove Creek->Yellow Connector->225->Daniel Ridge counterclockwise->475->5095?->Long Branch->475->471-> 471D->Butter->Long Branch->Cat Gap. 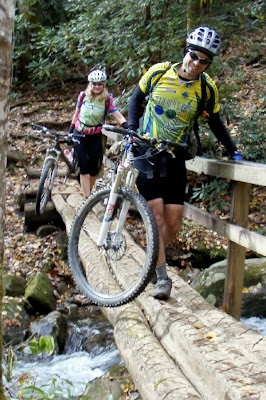 The ride started with a warm-up pace to Cove Creek then Mike, Rich, and I picked it up. Rich didn't sweat a drop though and talked about a million things in a row that I cannot recall right now. That made for quick-bike-ride to the connector and up to 225. MB broke his chain just before the top and I realized that one of the new guys had decided to ride the whole day in big/big. Ummm.... good chance you'll be the next one with a broken chain if you keep that up fella.... The climb to Daniel went by quickly, we ran into Youngblood and Amy along the way, and Mike, Dicky, and I dove in and railed all the way to the bottom of Farlow with aplomb. A quick regroup and the train continued to the bottom of Daniel. Mike was in the lead and took great lines all the way, I was on his wheel with Dicky less than 5 seconds behind. Badass Dicky. The movie-fork seems to be working out for you.
The group moved quickly too, and up, the gravel road to Long Branch. Kassi then took off down the hill with the dogs and the rest of us went up towards Gloucester Gap.

What happened next? Stay tuned! Will I continue or not? Talk about running into 'tiny shoes' Jody F.? An old male stripper and his 'little dog'? new guys with downhill skillz? Flat tires? An IF with a 97 Marzocchi? Waterfalls? Tutus? Lightsaber fights???? Tune in.... Maybe I will.... Probably... I won't... 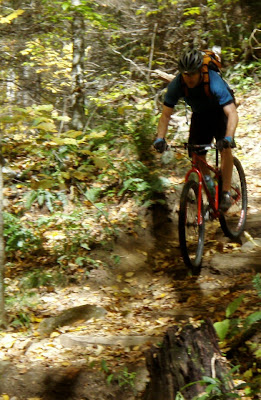 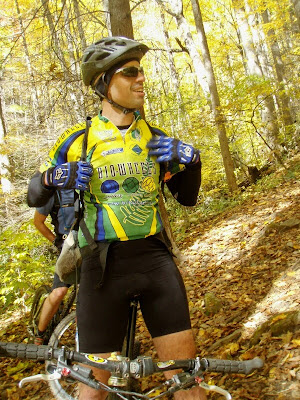 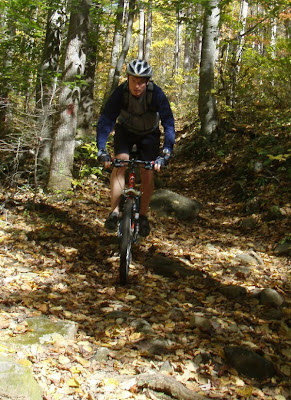 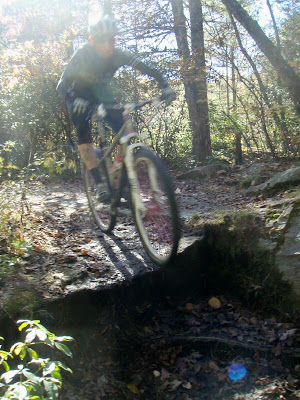 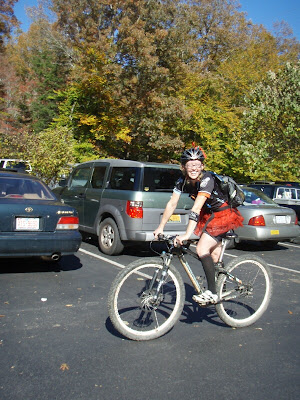 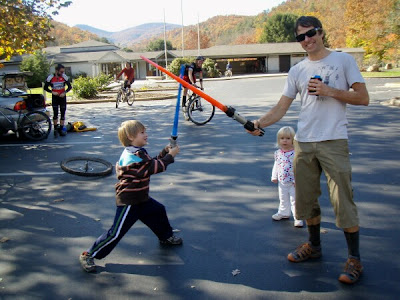 Oh, one thing non-ride related, my old old old OLD school friend Mark M. and I got to hang out this past Wednesday and eat a sushi lunch at Wasabi, drink some evening beers at ABC, and talk about current life and the like the entire day... Then Ian L., Erinna, and I watched in awe as he rocked the Orange Peel. Here he his on guitar later in the evening.... You're a f'ing badass Mark..... badass.

Posted by Eric Wever / Pisgah Productions at 5:24 PM No comments: