Crosseyed and (not) Painless

Ok, I'll cut to the exciting bit right away this time. This morning I climbed Trace Ridge and had planned on descending Spencer to the never-ending-road then to further points unknown. Well that didn't happen. On the descent to Spencer Gap I went down h-a-r-d. I saw the first little here-to-there jump and hit it, then immediately another followed. When I landed the second time I was lined up directly for a log that was laying parallel to the trail and I speared it with my front wheel. I highsided at highspeed, had just enough time to think 'oh shit', flipped over, and landed on the back of my head first then the small of my back off the side of the trail. It took me a moment to sit up and start assessing the damage. I took my helmet off and checked, yes, it was very broken. Uuugh and that my lower back was jacked.... and... uugh... is my molar chipped? I then stood up and noticed things didn't really look right, like, my depth perception was off, and thought to text Erinna. 'I just broke my helmet, I think I'm ok.' In retrospect I should have waited until I could be a little more definitive about the Ok or not Ok part.... Anyway, I took a photo from where I landed 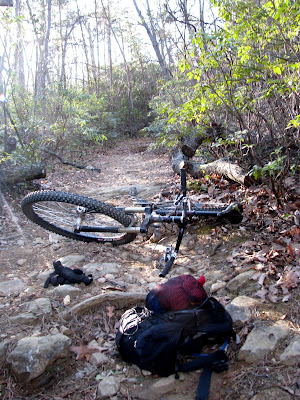 then started moving forward to the gap. Right as I got there Capt. Morgan, Tim H., and Russell ? had just arrived. I told Jason what had happened and he offered an escort out of the woods, but I declined. My vision was funky but I could make it out. He accepted the relief of responsibility but would look to make sure my vehicle was gone when they made it to the campground. I could tell he was concerned.Thanks for looking out Jason. I then descended Spencer vvvvveeeerrrrryyyyy carefully and then 5000 back to the Jeep. When I got there Scott from Indy was just about to start what was supposed to be the second leg of the ride but you know, I wasn't game, it was time to hit the road. I called Erinna as soon as I was in range to let her know I had made it out.
I didn't think much about the head hit again (since my vision seemed to go binocular again after a while) until I went to drop off my bike at ProBikes to buy a new helmet and to get the front wheel trued back up. I told Jamie the story. 'How long were you out?' He asked. 'No, I didn't even see a white flash like usual' I told him. 'Did you see a black flash?' I thought about it and had to admit, 'yes'. 'HA! You don't even know how long you were out then!' Oh shit.
The rest of the day was spent with my beautiful family and being thankful for them, my health, and my good since to wear a helmet every time I ride a bike.


Late edit: I didn't mention earlier that I also lost my keys on this ride. I had held onto the same keyset for 12 years or so until then. How do I know? My keys have had this Thomson keyfob: 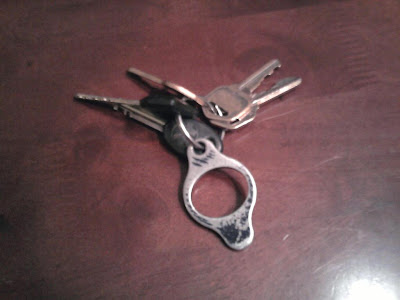 that the Pony gave me while we were both still living in Charlotte. No matter how many different keys have rotated through (4 front doors, 3 cars, 2 significant others, and 1 job) this fob has hung on. Well, somewhere after the crash I lost them. I posted on the mtbr.com NC forum, on a long shot, that I had lost my keys and for folks to keep an eye out. Well, tallpaul actually found them while he was out riding today (Why else would I have a picture of my keys?). How cool is that?
Posted by Eric Wever at 7:03 PM 5 comments: