I've been on my bike a few times lately but just have not had the time to sit down and write about them. Since The Babe is taking a nap and the house is quiet I'll try to knock this out. 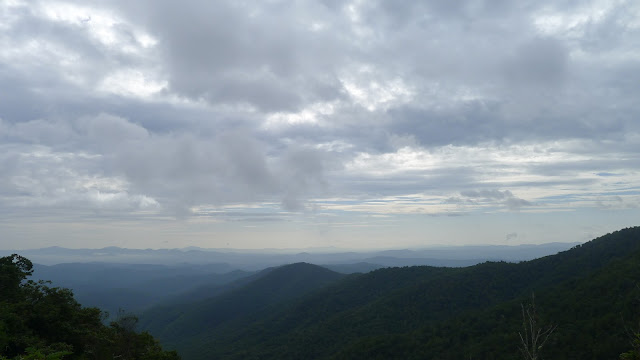 Yesterday was one of those days that was just about perfect. Erinna and I both got out on the bikes (I say almost perfect because we did not ride together) and Zoe and Sophiedog both got into the woods, too. We all drove up to Buck Springs and Erinna was on her bike by 10:30am for the second half of the Pisgah Monster Cross Challenge course. 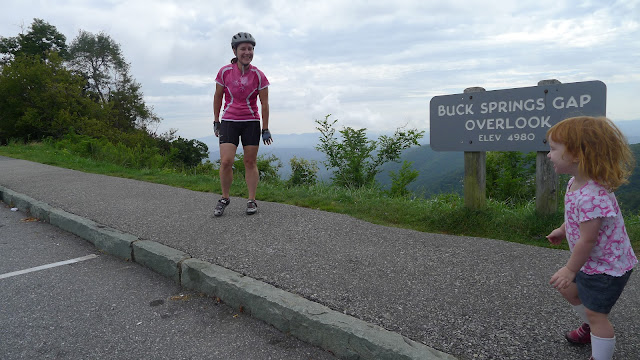 Zoe, Sophiedog and I then hiked out and back on the M2C trail. 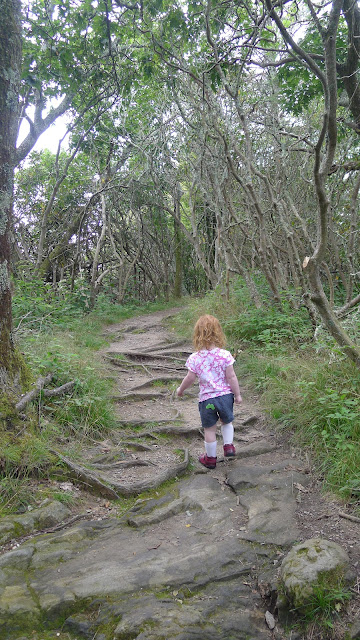 When Zoe was done walking we went down to the bottom of the mountain to play in the creek and to visit Looking Glass Falls. 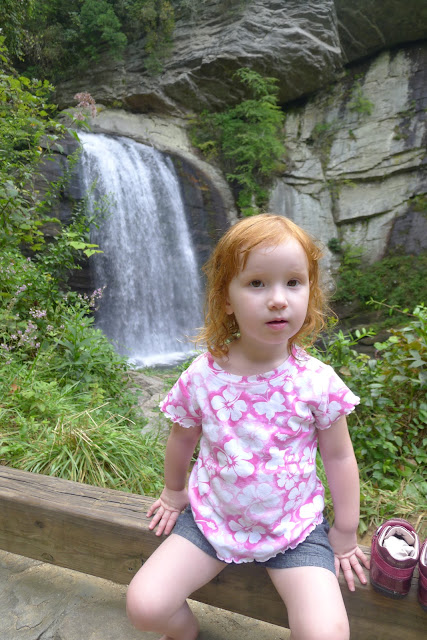 We went to White Pines to play in the creek but the water was a bit too cold so we decided to head on over to The Hub, where we were to meet up with Erinna again. Along the way the sky opened up and I started to worry about Erinna. We drove to 475/475b and within three minutes Erinna arrived, soaked, but ready to continue. Zoe, Sophie and I then drove back to The Hub where we waited for Erinna and I had a beer (or two) and I readied myself for my ride: From The Hub back to West Asheville via gravel roads. 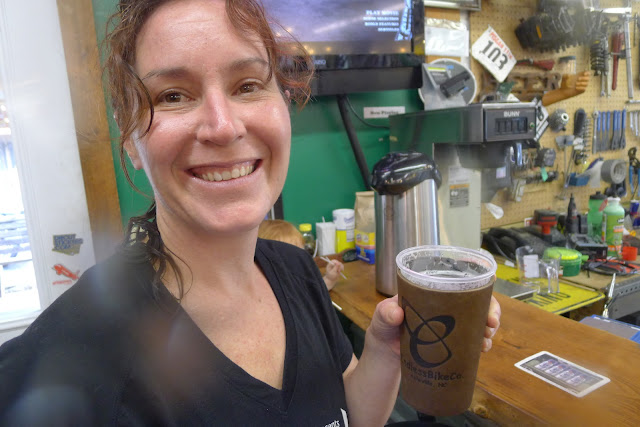 The rain was still coming down when I left. My ride plan was not concrete but I turned onto 477 and just couldn't bear riding it all the way to 276 again so the bars turned at Clawhammer and I was on my way to Buckhorn Gap. 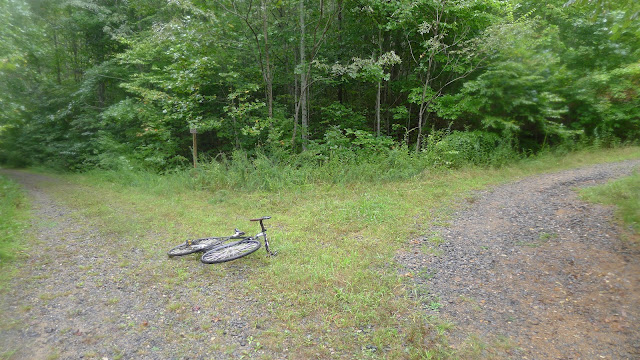 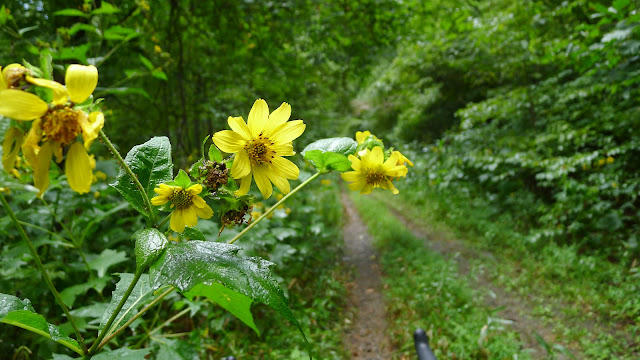 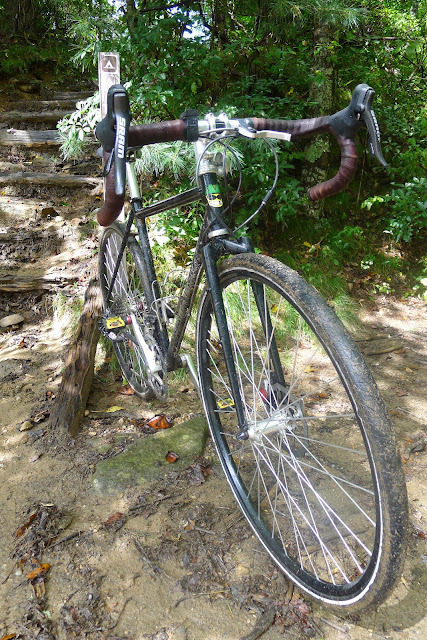 THAT was a long, slow, tortuous climb, to state it mildly. I then took Buckhorn Gap trail to South Mills River trail, heading to Gauging Station Rd. I was finally getting into the groove and railing through the singletrack when I felt a hard hit. I was stopped and checking my rear tire before it was even all the way flat. I took my time (and had a bit of a freak out when I couldn't immediately find my pump) then continued with a bit more caution until I was off the singletrack. 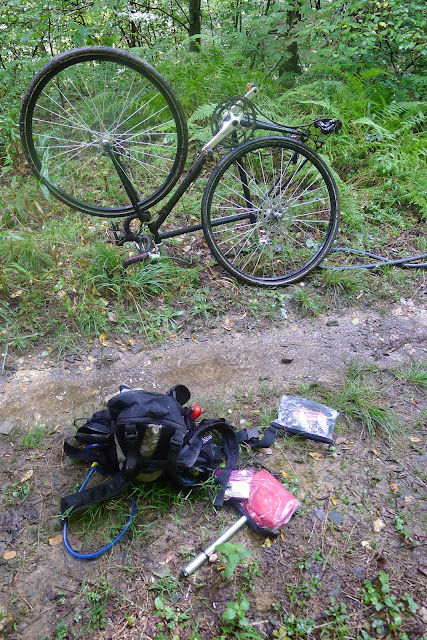 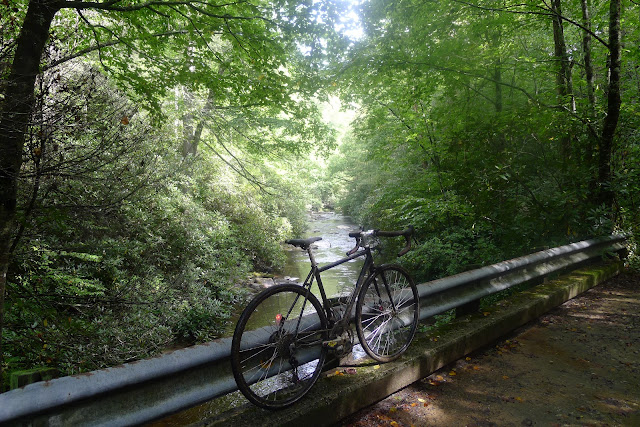 I was feeling a bit of a bonk coming on when I got to Gauging Station but ignored it until the intersection with 1206. I should have eaten earlier though, the damage was done. I even had a 'where am I?' moment along the way to 1206. That was disconcerting. I gobbled down two packs of blocks to give you an idea of how hungry I was.
1206 was slow going. I had to conserve until the calories were absorbed. I stopped often to take photos and to hang my head low but got going super fast during the descents. I was literally thinking about the Monster and the warnings I had to give the racers about traffic when I had a very scary WAKE THE FUCK UP moment. Absolutely hauling ass through an outside turn and a SUV was suddenly right. there. Full brakes applied I went into a classic Nac Nac skid and avoided becoming a hood ornament by about 18". Holy hell.
I decided it was time to take a few photos of the pretty flowers. 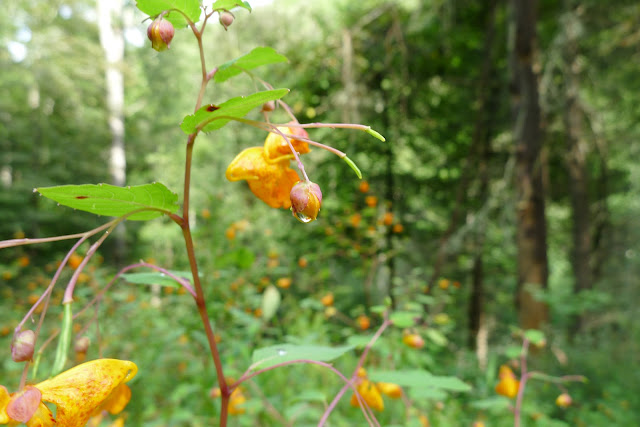 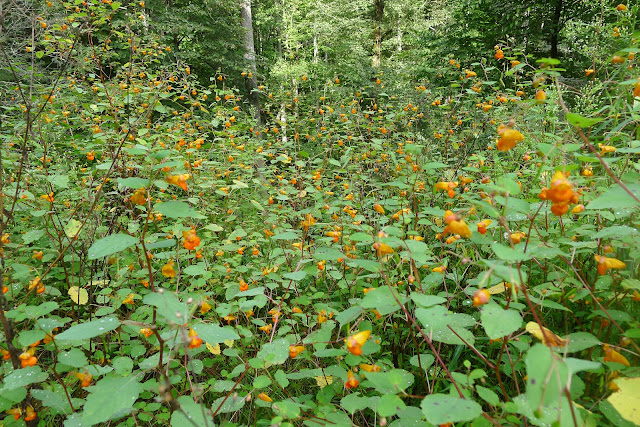 and collect myself. The climb up to Yellow Gap went by very slowly but I got there eventually. Only one more mountain to climb. The descent to North Mills was thrilling. I hung it out as far as I could and had zero traffic interactions. Down near the Big Creek Lodge I was in the big/little and flying. The GPS says I got going 36 mph along the way. Not bad for skinny tires on a gravel road. 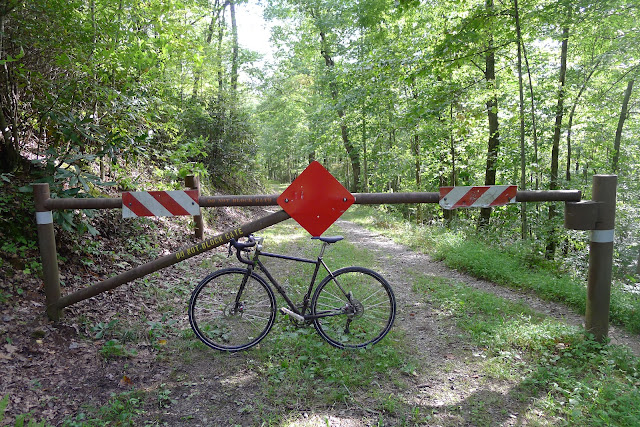 I refilled my camelbak there and talked with a couple that had just spent the day swimming in the river then slogged my sorry ass up the mountain to Bent Creek Gap. I was in a daze at this point. I rode right past the Trace parking lot road without realizing it. I was at the first gate in a flash. Trace moments later. The third gate took forever to get to but I knew I was home free at that point. I know the false top so it didn't fool me and was at the bridge after a time/space continuum wrinkle. 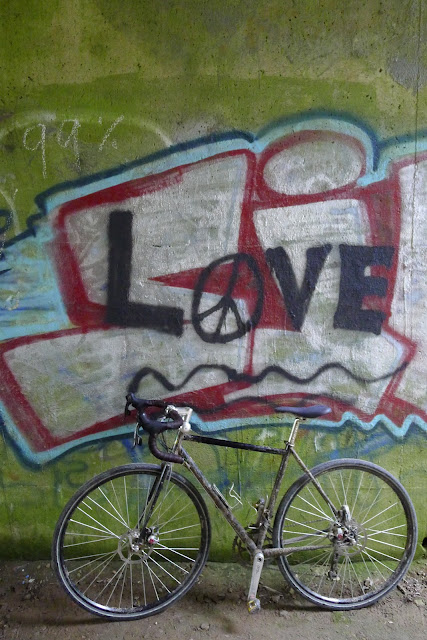 I was starting to bonk again. I received Erinna's text asking where I was, responded, ate the rest of the food I had with me, took a couple deep breaths and hammered into the Bent Creek Gap road descent. I was hanging it all out, taking risks, cutting corners, and THUMP.... another rear flat. 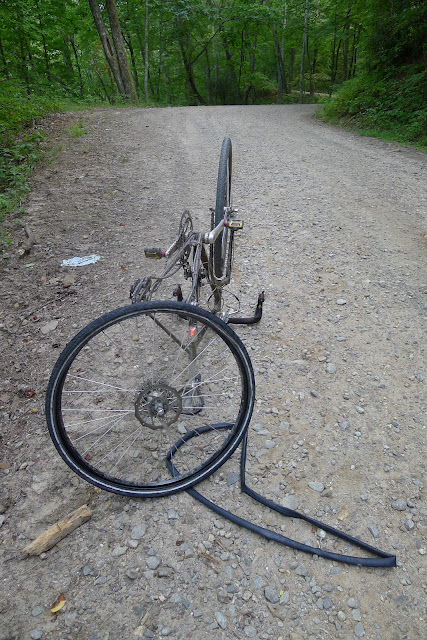 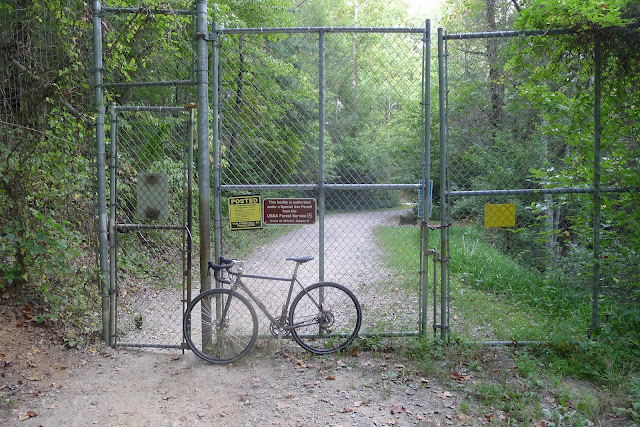 It was open. I cruised through the Arboretum to 191, stopped at the Hot Spot for snacks, then continued to the greenway back to West Asheville. 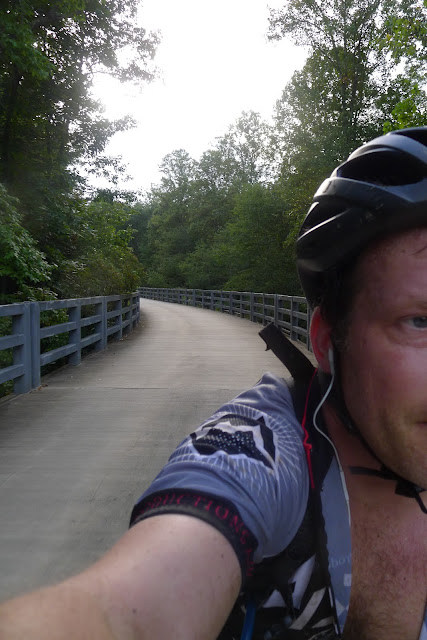 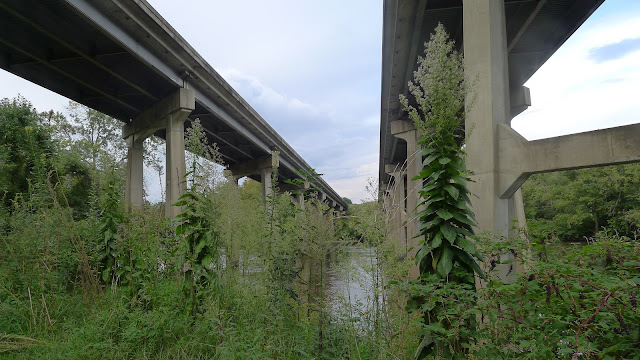 and was home minutes later. Erinna and I were in the Jeep heading to the local Cheap Mex restaurant minutes after that. Excellent.

Why were my legs so tired and I was so close to full-tilt bonk? It may have had something to do with the two hours of riding I did the night before. I got out just before 9pm for a little urban gravel. My mind was into it but my body was suffering for the warm-up so I stopped a number of times from Westville to downtown. 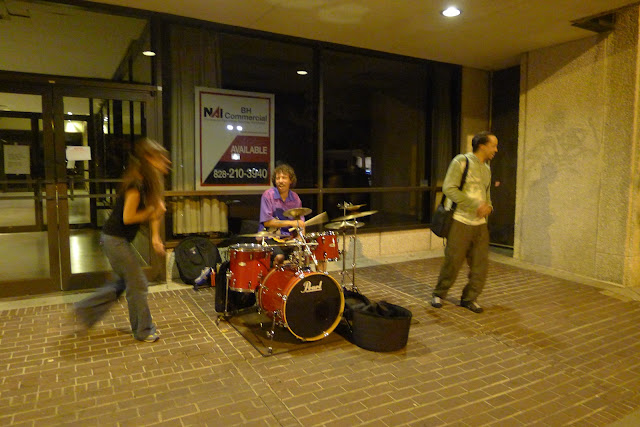 I stopped to watch this crew do their thing (Classic Motown meets HipHop) when RND showed up and laid heavy news on me. 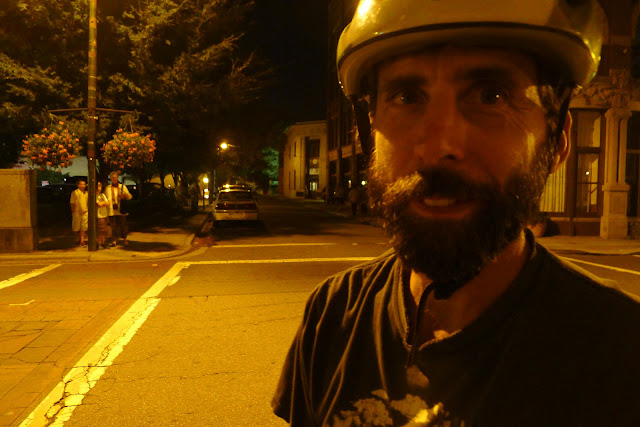 He was willing to tag along on my ride for a little bit but cut out once the hill started to go upward. 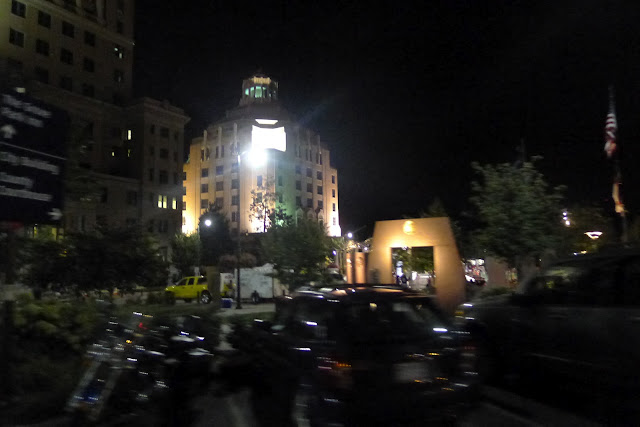 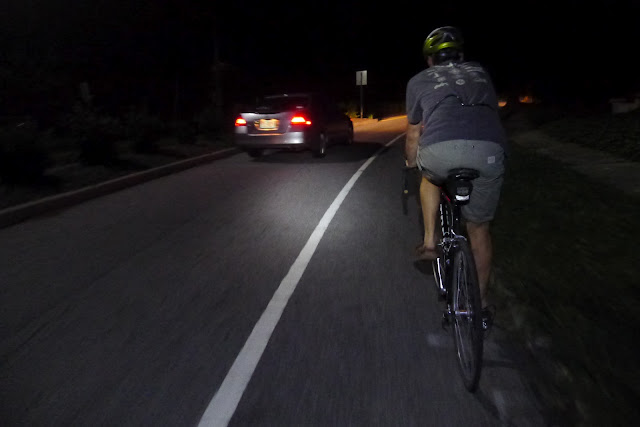 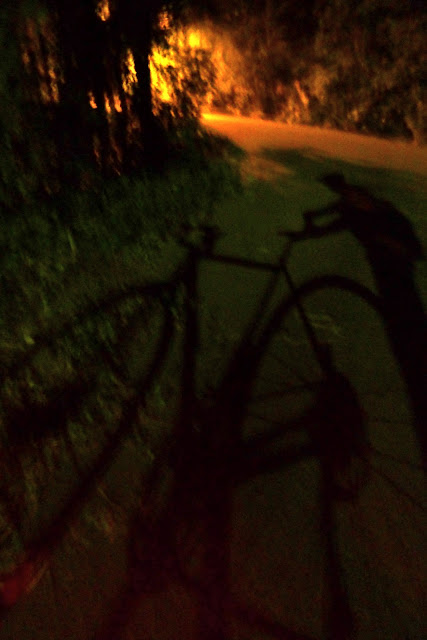 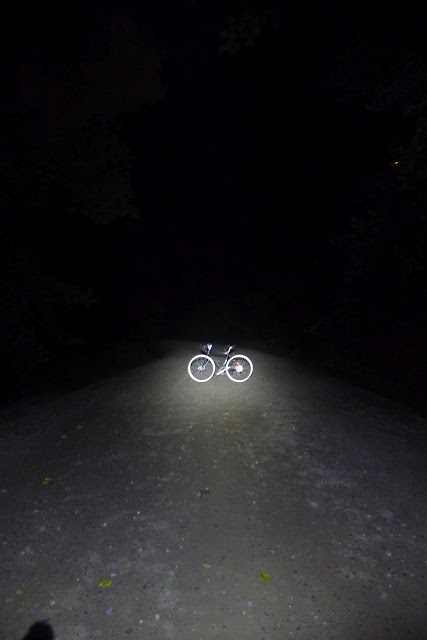 The highlight of that ride was trying to beat my KOM Strava time for the one segment that I have created: From the top of the Town Mountain climb, down to the parking lot at Webb, down Webb, and all the way to Beaverdam. This time around I had no cars in my way, I maintained momentum through the turns, and peddled through the burn all the way to Beaverdam. Unfortunately the GPS was malfunctioning so all I have is the memory of that descent, no hard data. I didn't know that at the time so with a big smile knowing I had a new record I peddled out to Merrimon then back to Westville. I stopped along the way to take a few photos of the murals that are popping up all around town and made it back home in just over 2 hours with all my stops. Not bad. 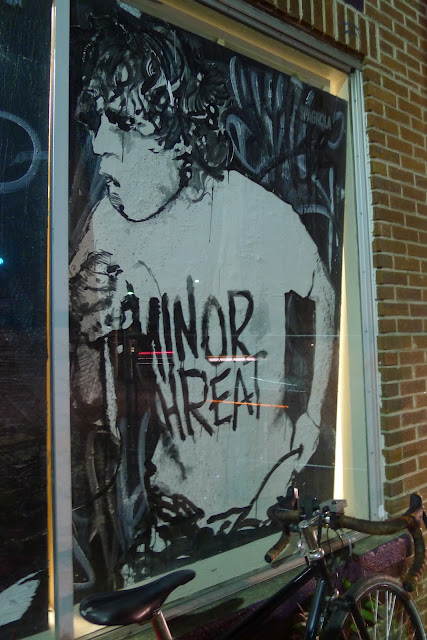 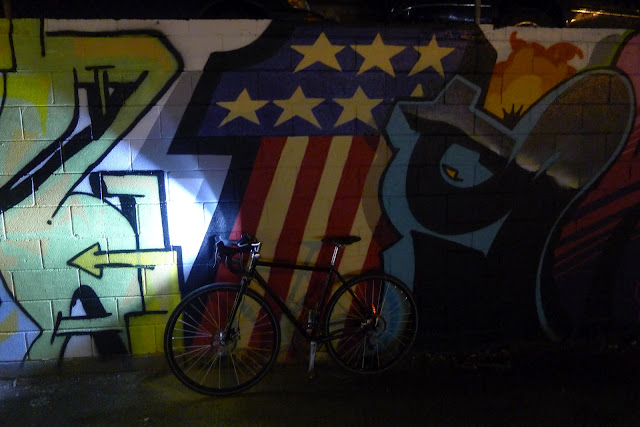 The third ride of this post was a week prior to the last ride. Erinna and I took Zoe downtown and walked through the Goombay Festival then The Babe started to melt down. I had been battling a cold for the better part of the proceeding week and was ready to go home, too. It was a beautiful day, thunderstorms looming but not letting go, highs in the low 80's, and 200% humidity. After about an hour at home I decided it was too nice of a day to stay be off the bike, despite having just broke a fever the night before, and told Erinna my plan: Duck around downtown to avert the masses, up Macon->Old Toll->Sunset->Patton. I didn't make plans beyond that because I didn't know how I was going to feel. 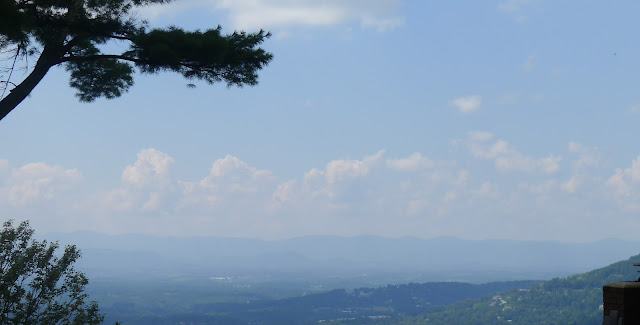 Well, at the top of Patton I was wrecked. My illness was not gone. My lungs were burning and my head was not necessarily pounding but more like... I heard WHOOOSH WHOOOSH WHOOOSH with every heartbeat. It was time to head back home. I descended Town Mountain back into downtown. Past the city building and into Pack Square. I sat in the sun for a minute to collect my thoughts, particularly what the hell was I doing on the bike? and immediately realized the gotopless rally was still going on. Well, whattayaknow. If the ride isn't great the views always are. Asheville! 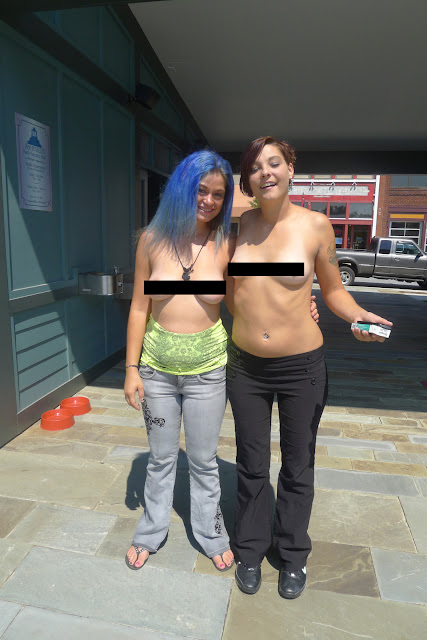 Posted by Eric Wever at 3:40 PM No comments: