Flowing like a roller coaster coming down the mountain

Early the morning Scott from Indy, 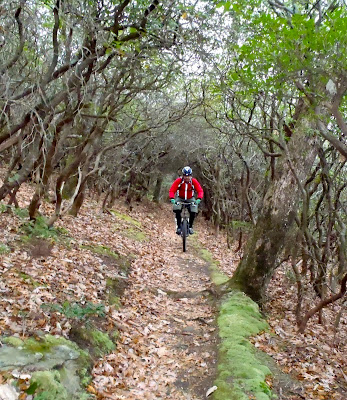 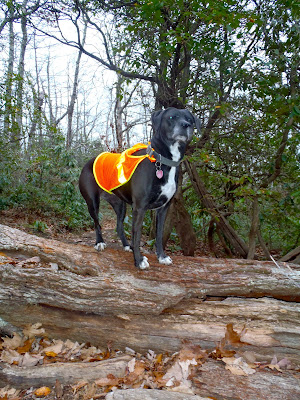 and I got out, yes, on a Monday, for a great little Pisgah ride. We had planned on the most classic of the classic Pisgah rides, Laurel/Pilot but were turned around just before Turkey Spring Gap by sleet. So, our route: Laurel Mountain from Yellow Gap to the top of the $2000 climb and back. 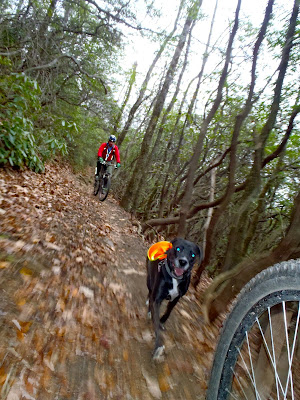 The pace was relaxed and comfortable, perfect for Scott's 5th day on the bike in Pisgah in a row and for Sophiedog's 1st day in the woods in months. We didn't pussyfoot around the tech sections despite the overall relaxed vibe though, we went for every one full force. It was just that we were able to talk the entire way up the climb so our heartrates were never though the roof.
When we got to the climb past Good Enough Gap we could see the clouds ahead and moments later we were dealing with large raindrops and sleet. 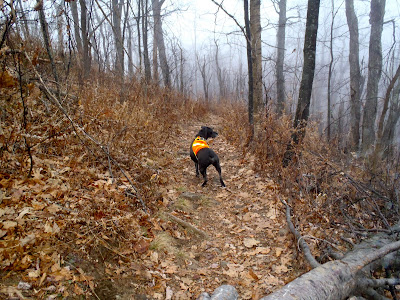 We had been talking rainjackets before the ride and the decision was quickly made, since neither of us were well prepared for rain today, to just head back down the mountain. Sophie would enjoy that more rather than having to run the 5 or so miles back to Yellow Gap on 1206 anyway.
The downhill was a hoot as Laurel Mountain Trail always is, up or down. I've tried again and again to describe how close to a slice of mountainbiking heaven Laurel is in the past so I'm not going to try again now. Let's just say it was a spectacular descent. 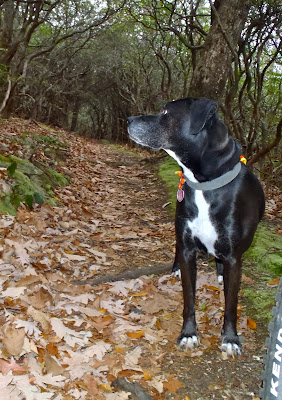 Thanks for getting out on a Monday Scott! Thanks for being cool with the malleable ride plan and with me checking my digital communication device 10 times (I was kinda playing hooky, it had to be done). Have a safe drive back to Indy!
Posted by Eric Wever / Pisgah Productions at 12:39 PM 1 comment: