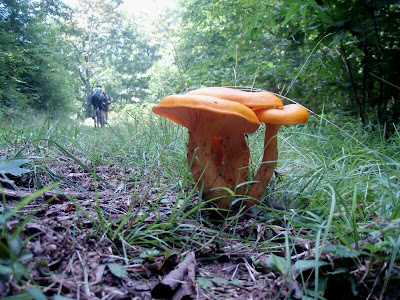 Mike B. at Slate Rock not making funny faces: 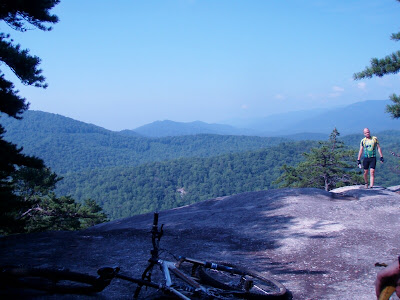 After my faceplant I was covered in chocolate sprinkles: 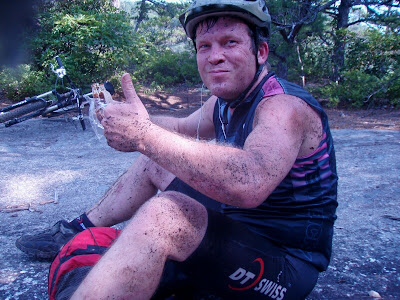 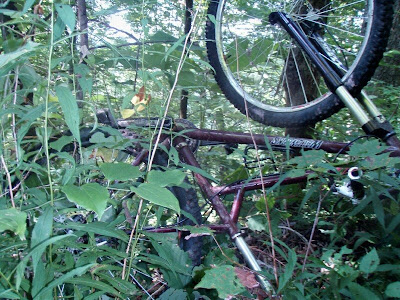 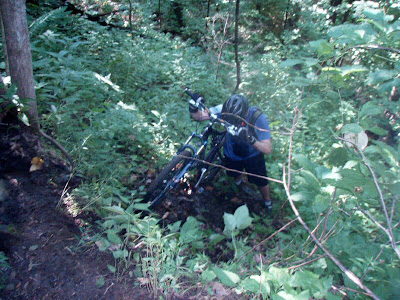 Mike R., after returning from off the trail 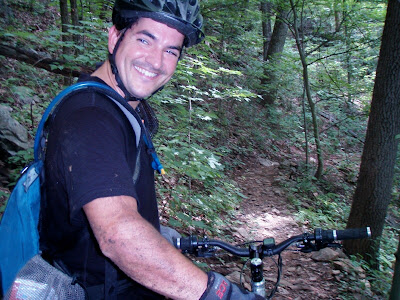 Can you spot the off the trail damage to Mike R's bike? 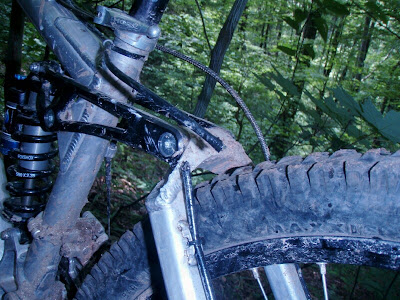 and one final photo, of praying mantis that seemed to have hawk-like vision. I probably took 10 photos of this creature as it hopped from on my bike and off, to here and there, back and forth... It seemed curious.... but cautious. How big are these thing's brains? 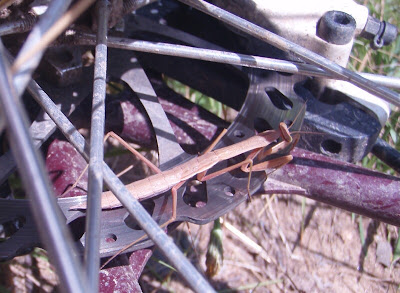 Here's a quick semi-panorama of the video view from 2/3 of the way up 5018. Looking towards Looking Glass and Black & Clawhammer Mountains

Mike B., and I rallied at my house just after 7am to meet Mike R. and Eric C. at NMRC at 8am yesterday. Well, there was a bit of miscommunication about the starting point so we didn't get going until almost 9 at the Bradley Creek trailhead. Pilot Cove was first and before we reached the end of Slate Rock all four of us had gotten a bit more familiar with the dirt. We took a long rest at the Slate Rock then did something a little different at the bottom, we headed back up the other way and over to no-name/pilot to keep Sophie off the gravel as much as possible. That climb was much tougher than I had expected but at a little over two hours ride time we were at the bottom of Pilot. Gravel road right, gravel road left, gravel road left and we were climbing 5018. I had visions of rattlesnakes dancing in my head and Metallica singing 'creeping death' in my one ipod'd ear. We took a quick break at the 2/3 point then charged onward to Horse Cove. We took a lunch break there and noticed Sophie was acting like she was bonking. We pressed onward to Squirrel and that's when I realized she was in some sort of real trouble. Too hot? Not enough food? I don't know, let's get to Cantrell so she can cool off in the water. It was slow going and when we got there I noticed the pads on both of her front feet were torn to shreds. Awww poor girl, sorry, there's not much we can do for you but slow the pace…. We took another extended break at Cantrell for Sophie's sake then as promised, slowed the pace even further for the rest of the day. I would wait for her ever couple hundred yards, would watch her trot up with a big smile and wagging nubbin of a not-tail, then would continue forward, which made for very slow going, but it was all we could do for her. Galloping was not an option anymore. We eventually made it to the bottom of Laurel Creek where the high speed portion of our day was done. The easy-going climb back up Bradley went by quickly as Sophie enjoyed the constant (12 total) river crossings. We were back to the vehicles in a bit over 5 hours. A slow overall pace for the day, no one seemed to mind. Once we were back at the vehicles Mike and I had to get out of there rather quickly because I needed to get to work. A rainstorm hit just as we were saying our 'great ride' and 'see ya next time' s. Timing couldn't have been better.

It's funny, we had bad mechanicals, bad crashes, an injured dog, and I fought off leg cramps at one point but the ride was still spectacular. How do you explain that to a non-mountainbiker? That's a hard one. Say: 5 hours in the woods with fun people and a great dog can bring about unexpected things but the experience is worth every sore muscle, every broken bike part, every rushed exit. Thanks for getting out there guys! What a great day.
Posted by Eric Wever / Pisgah Productions at 6:13 PM 4 comments:

I got out yesterday evening for a fun ride with great people on new trails. I honestly didn't expect the ride to be quite as long as it was. It's official though, Richmond Hill is super-fun and is going to be a huge asset to the cycling community in Asheville once it's complete. Thanks need to go out to Mike Brown for heading the project and the entire SORBA crew for making it happen. THANKS!!!
Mike B. and I rode from West Asheville on pavement to downtown and met up with Eric K., Ian B., and Mike from FBB at BioWheels just after 7pm. We hit the streets with speed and made our way over to the school trail first then up the climb to Richmond Hill. The RH trails are excellent. The terrain is similar to just upstream at Biltmore but with a touch more elevation change. The trail tread is completely different though. Mike and crew have hand built about 5 miles of trail that connect up with old roadbed here and there. Right now it's an unsigned mess/maze but that'll change soon enough, too. FBB Mike was a little off the back for most of the ride but no one was frustrated by that, no one had a race mindset. The sun set quickly as we were navigating the tight twistly rocky rooty singletrack within riding distance from my home. We bailed out without even hitting all the trails out there and hit the pavement back to our starting points. The rest of the guys went back to downtown and I got back to the house on the West side just after 9pm. What a great way to spend a Friday evening.
Posted by Eric Wever / Pisgah Productions at 5:48 AM No comments: