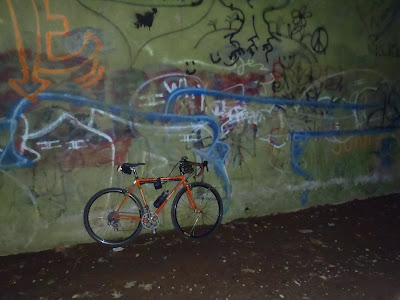 Last night I got out for an impromptu road/gravel ride. Just before Erinna and I sat down for dinner the decision was made: I was going to quickly knock out From West Asheville->Hominy Creek Park->191->Bent Creek Rd->479->Blue Ridge Parkway->191->Haywood->Home. I was on the bike right at 8PM. 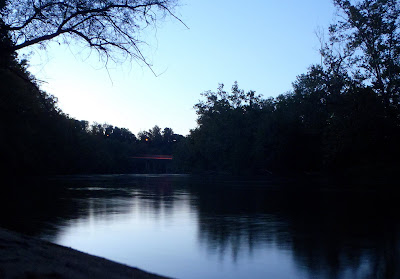 My first real pavement was 191 to Bent Creek and just as quickly as the light faded my light flickered out. Crap. I thought the battery was charged but I guess not. I weaved in and out of the road work barriers on 191 and right as M.I.A. was singing 'You big dummy!' in my left ear I hit uneven pavement and almost went down. Crap! Well, so much for the whole vampire eyes thing while on the road. I contemplated my choices and they all pretty much were if I didn't get a light on my bars I had to go home. I stopped by the Hot Spot gas station and whattayaknow? They had LED mini mag lights for $4! A money exchange and a bit of packing tape later, I was on my way. 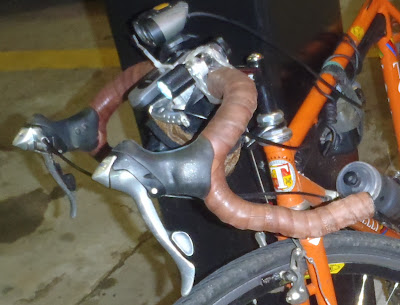 Well that was probably the best $4 I've ever spent. The light was bright enough for the trip to Bent Creek but I did outrun the light on the one gravel descent before the climb to the Parkway. Speaking of the climb, I had a blast. My legs were on fire. Head-down-in-the-drops-climbing on gravel. Hell yeah. Landmarks clicked by as I watched the sweat on my arms gleam in the bright white LED light. The shadows of my front wheel and rear brake lever danced along the gravel. The temps were in the 60's. The moon was a bright yellow crescent. Lower Sidehill. Gone Tomorrow. The bridge. My legs were screaming (for more) for me to stop. 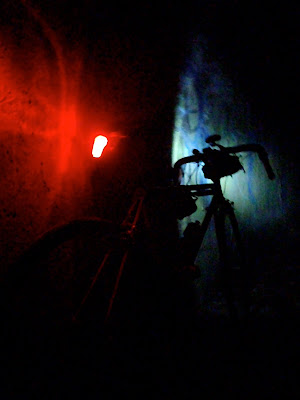 After a quick breather and a photoshoot of 'ole Orange I was on the parkway and ready to descend. The $4 light was just enough as I passed through the tunnels and tried my best to spin out the 53/12 gear. The curves came quick and the drivers were hesitant to pass. I again got into the head-down-in-the-drops tuck and was at the Arboretum very quickly. The ride back to West Asheville also went by in short order because now I was warmed up, the screaming legs had settled more into a chant than a scream, and I wanted to get home before a 2:30 time out. I arrived at EXACTLY 2:30 out and thought to myself 'I may just have to do that again tomorrow night'.
Posted by Eric Wever / Pisgah Productions at 10:44 PM 1 comment: