On Tuesday night I got out for a mountain bike ride on my road bike. Erinna told me she thought it was a bad idea but being hard-headed as I am, I did not listen and went for it. 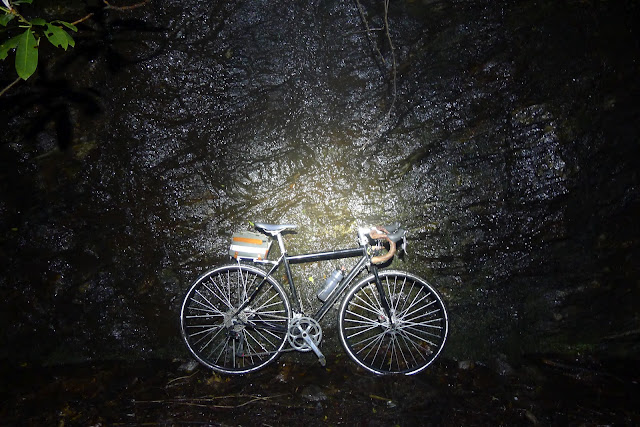 I parked at the entrance to Gauging Station Rd and started with Gauging Station to South Mills River trail. I did have an motive for the ride, I needed to clean up the final bits of Kenda tape that marked the Pisgah 111K race course. I figured that the only section of real singletrack would be over quickly and that the bulk of the ride would be on gravel and pavement soooo.... the road bike was my best choice. Well, Erinna's words rang true as I tried to get a sip of water while on the singletrack. I was instantly down. Uuugh. Wake up Eric! 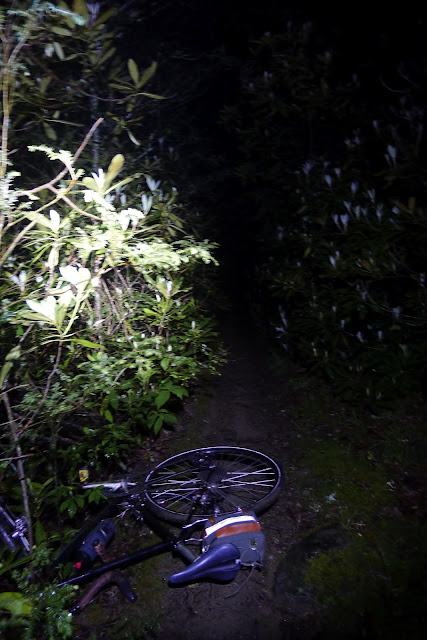 I continued with more caution after that and picked my way all the way to Buckhorn Gap without a single knobby on my tires. I also picked up what felt like 100 pieces of tape along the way. 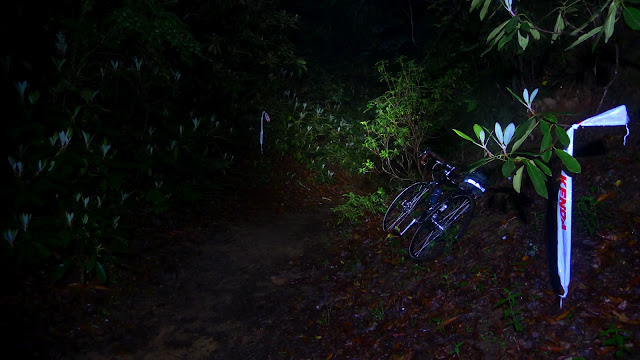 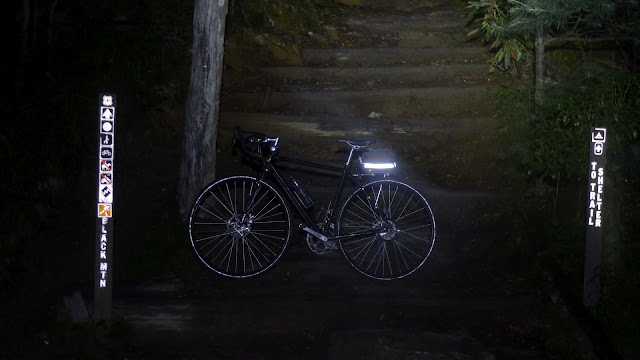 It took me much longer than anticipated to get there because of those two facts. Once on Clawhammer road the Allroad bike was clearly the correct choice. I hauled down that hill with a smile on my face the entire way. Once at the Horse stables I took a little break and made a new friend. 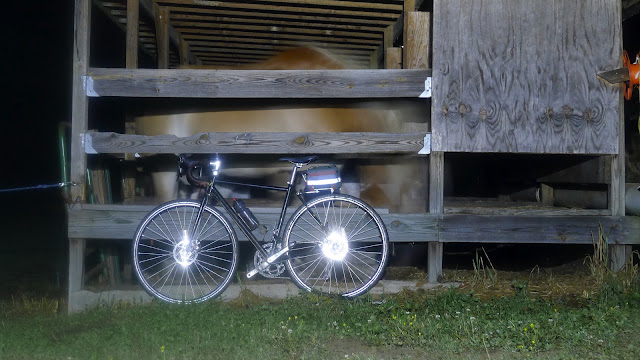 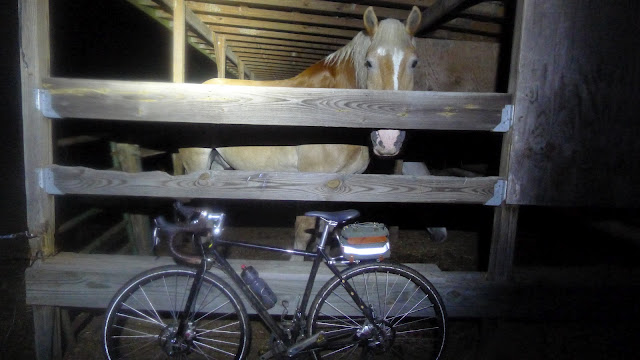 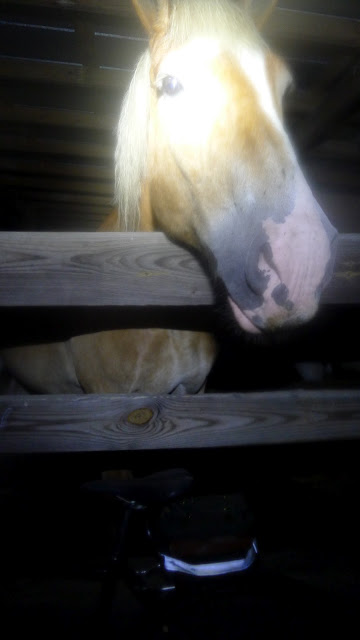 He was a little skittish (who wouldn't be when visited at 11:00pm or so by a smelly guy with a light on his head?) so I took off after just a few minutes. I had a decision to make once at 477. Up the gravel or down to the pavement? I decided the pavement was a better choice. 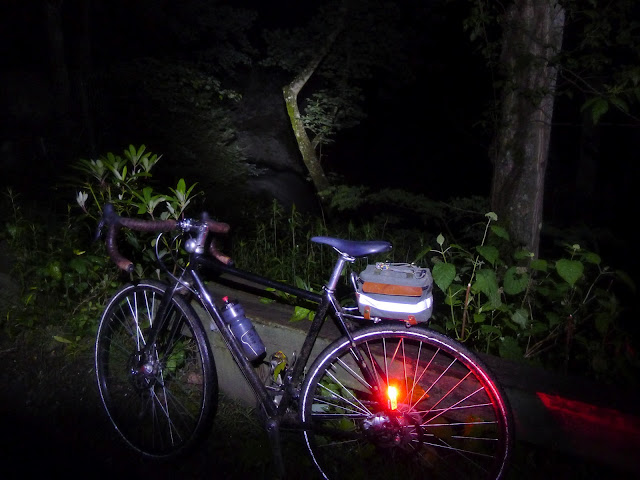 Instantly upon arriving I noticed something that I did not like. The painted-on-the-pavement numbers that I followed a few weeks before now extended all the way to 477. I knew 1206 was at number 150. I was at 500. Every 100 feet or so I would see the number click downward.... slowly... 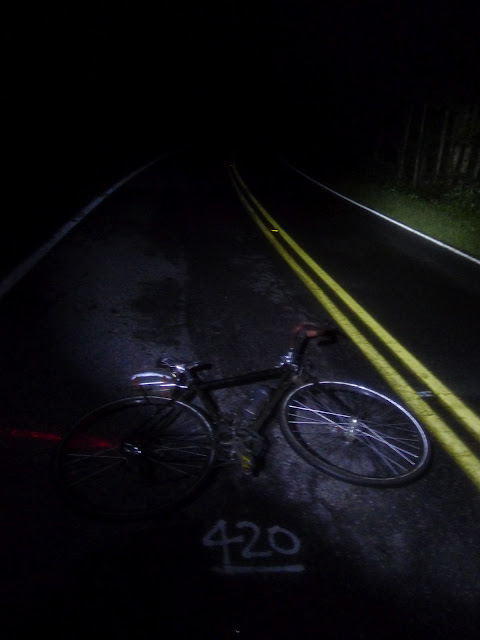 The ride to 1206 was not very strenuous, just long. It seemingly took forever to get to my next turn. Once on 1206 I was wishing for a can of coke or a caffeinated gel or something, I was getting sleepy. 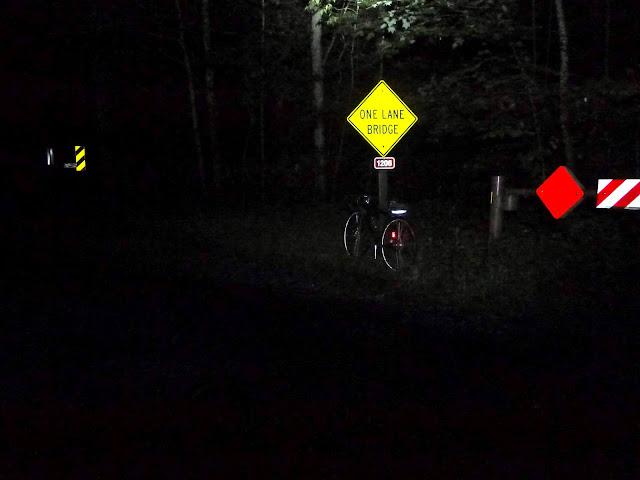 I arrived back at the Jeep just after 1AM and texted Erinna to let her know I was off the bike and coming home. Thank God I didn't have a flat or light issue or anything like that along the way. The ride had taken much longer than I had expected and my first day back to work was the next day and as it stood, I had to be there 5 hours after I got home. However, I did achieve my goals: Get a big 'ole ride in on my last day of vacation and complete the in-the-woods Pisgah 111K cleanup.

Posted by Eric Wever at 1:26 PM No comments: