Click on the map or topo for a larger version.

Mike Brown and I went on a fun ride yesterday. We had every intention to pull out all the stops and ride a 45+ mile loop but alas, it did not work out that way. Between me going through the weirdest bonk in a while and Mike having mechanical issues, our pace was too slow to add in the extra 12-15 grueling miles AND make it home by the time we told our ladies we would.

We started at the Black Mountain trailhead and jumped onto the pavement to the Fish Hatchery. The air was cold but not freezing and by the time we took the turn onto 475 I had broken a sweat. We decided there to ride our loop clockwise so next was the climb up to Gloucester Gap. We made quick work of that climb and we took our first rest at 5003. I was working hard to keep Mike’s wheel on the climb up 475 so I let him l lead out on 5003. Again, we were working hard but the views were so incredible I slowed and let Mike climb away a couple times, just so I could enjoy the sights. One view in particular sticks out in my mind, there was no way to capture the scene with my camera, the panorama went 270 degrees around with Looking Glass Rock taking up the center of the view. Outstanding! We continued past the intersection of 140A and decended to Couthouse Falls Road. I took the lead for the first ttime of the day and HAULED ASS down to CFR. I nearly ran headlong into the mounds at the bottom but was able to bring my bike to a stop right as my front wheel broke through the ice of the puddle before the first mound. We climbed CFR and I realized my legs were starting to feel weak. Next was the turn onto Kissee Creek Road. Kissee is fun, the climb isn’t too intense and we found a very very cool spot. We found what has to be the largest boulder in the forest. This thing didn’t come out of the earth where it sits, it fell from far above. The thing is, it must be 50 feet tall. There are two nice little camps there, too. Nice, very nice, I’ll need to keep that place in mind for the next time Erinna and I go bike-camping.

Here’s Mike at the base of the really, really big rock: 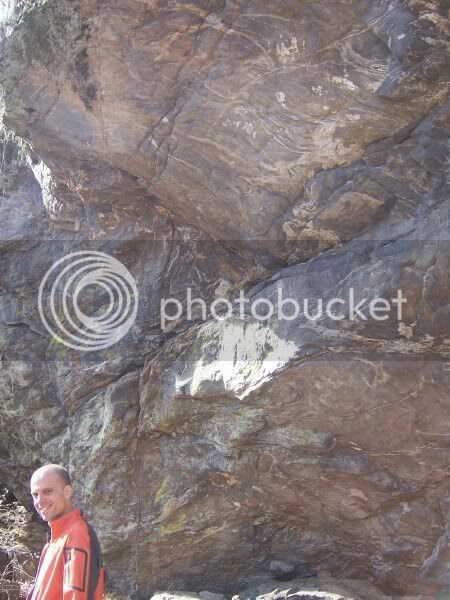 We spent a little while there before continuing up Kissee. Next was the intersection at the other end of 140A where we hung a left and went on up to Farlow Gap. Once we were on 140A my legs were not cooperating in the least. My head was i n the game, my legs didn’t feel like they were ready to cramp, I just felt like I had ZERO power output. I would get on the bike and pedal pedal pedal but as soon as the trail got tech, I would get bounced off line and couldn’t recover. I ended up walking… most of 140A up to Farlow.

If you’ve never been on Farlow Gap trail then there is no real use in trying to describe the conditions. There are many rocky, rooty, and super steep trails in Pisgah but Farlow takes the cake. It’s the rockiest, rootiest, steepest trail (that actually has a trail sign and is approved by the USFS) in all of Pisgah. Mike was riding the perfect bike for the conditions, a 6inch travel front and rear suspension rig and he used everything his machine had to offer. Mike’s downhilling skills have improved expodentially in the last year or so. Mike cleaned some of the hardest moves on Farlow and I was lucky enough to witness them. Mike was on fire! He cleaned the first rock garden, the pseudo-skateboard drop, the steps, the steeps, the switchbacks, just about everything! Farlow has a good little climb in the middle and that’s when I realized I didn’t want to try the second half of our route. I was hungry, tired, and without power output.

Here’s Mike crossing one of the creeks after the super steeps on Farlow: 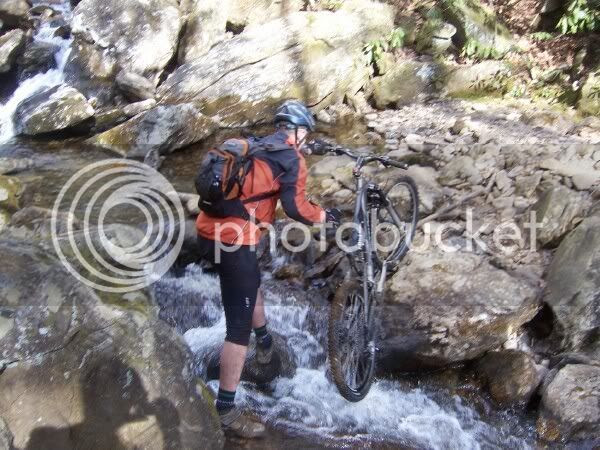 At about the same time we were dealing with Mike’s front brake, it seemed to have too much hydrolic fluid in it and was pumping up and causing the wheel to hardly roll. We got it working again before Daniel Ridge and continued our high speed descent. Mike pulled away in the tech, 12 inch wide benchcut, death to the right section and was waiting for me at the bridge ruins with a look like he had just seen a ghost. He told me he forgot exactly where he was, boosted off a root-pile, and had to force his bike through the rocks and turns that were ahead. Sweet move Mike! Next was the bottom of Daniel, through the gravel, across the bridge that was destroyed by the hurricanes of 04, and back to 475. We got out to 276 and kept a very heavy pace back to the car, well, it was heavy for me as I spun spun spun my SS while chasing Mike in his big-ring. We made it back to the Jeep in just over 5 hours. Not a super fast pace, but not too slow either.

I just got in from a quick lap around the classic Trace Ridge loop. The plan to ride was finalized probably 10 minutes before I had to take Erinna to work and, since she couldn’t come along, it was the first solo ride for me in a long time. The weather was menacing, low 30’s and threats of rain, but I went ahead anyway. When I got to the parkway (the way I go to Trace) it was closed. I had to backtrack and drive up the gravel road through Bent Creek. I parked at Spencer Gap Trail and was on my bike within 5 minutes of getting there. The initial climb felt great, I made it to the super steep climb through the field rather quickly. I took it easy up through the rooty section then got on and hammered hammered hammered all the way to Trace Ridge. I didn’t take a break there, I just continued climbing to the top. I spun out and had to dismount once during that climb but otherwise did well. Once I finished that climb I again put the hammer down and spun the one gear I’ve got as fast as I could. The steep stuff was next and when I dropped into the little intersection/field place it felt as fast as ever before. My chest was on the saddle and I was right on the edge of control… Time to bring it back a notch… I cruised into the second climb, crested, and started to descend again. Rather than regaining breakneck speeds I decided it would be best to stop and take a photo… 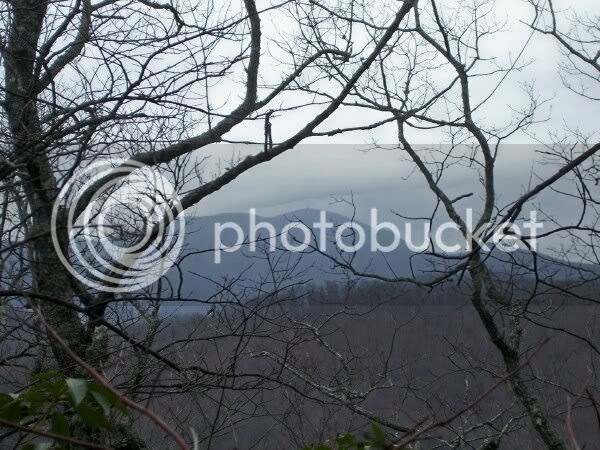 Once I got rolling again I kept my speed in check. My hands were starting to hurt anyway. I had a lot of fun, overshot the big lefty turn like usual, and even hopped a few of the waterbars into the parking lot. Aaaahhhhh Trace Ridge…

The rain was coming down as soon as I got into the parking lot so I decided I had had enough, time to ride the road on up to the Jeep. That is usually not very eventful but today… My rear tire went flat as I was passing the first gate. Crap. well, I only had a couple hundred yards left in the loop, so I just walked it on out. There’s something about walking up a road in the middle of the forest in not-freezing rain with a non-operational bike that made me just laugh. Thank God I didn’t have far to go. The humor would have lasted only so long.

Oh, by the way, WINTER HAS FINALLY ARRIVED!

Erinna and I met up with a larger than expected crew last Saturday for what was supposed to be a 50+ mile ride. We started at Black Mountain trailhead in sub 20 degree temps. Erinna seemed to be doing well, keeping the pace up hiher than I could respond to. Jonathon and I took up the end of the line for the initial climb of the day. However, when we regouped at Thrift Cove Erinna was having a hard-time, her feet were so cold they hurt. She doesn’t have appropriate cold weather shoes, her pink Italian leather Sidi slippers don’t allow even a second pair of socks. We convinced her to continue climbing, that if we kept moving she would warm-up. Well, when we got to the top of the climb she wasn’t doing any better, actually she was pretty miserable. Mountain biking is supposed to be fun, not miserable, so we decided to head on back to the car. Actually, the decision was made during the first descent when we came around a corner to the North face and an unconceivably cold blast of wind hit us. She was done and I wasn’t going to continue without her so we said goodbye to the guys and headed back to the Jeep.

In total we did 1.5 hours of riding, not 8, but the cold took it out of us… When we got home we felt like we had been on the bikes for days.

I managed to get a couple photos along the way. Here’s Jonathan and Dennis at a new sinkhole on Black Mountain: 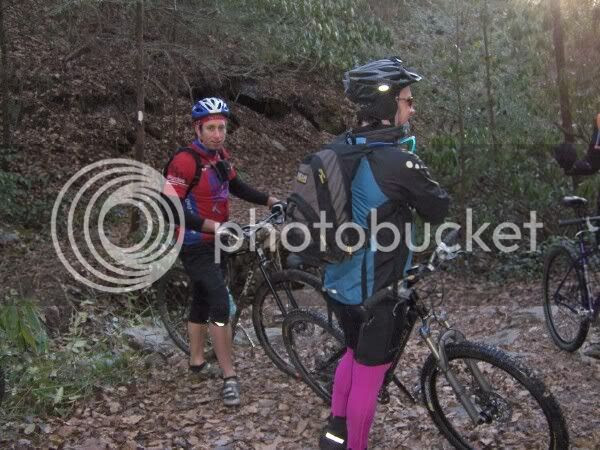 and Jonathan at one of the steeps before Pressley Gap.: 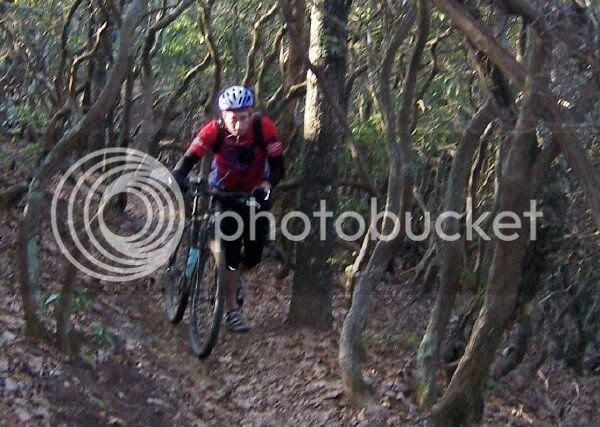 Thanks for coming out guys! Next time we’ll be better prepared…

I just got in from yet another excellent ride in the Pisgah National Forest. 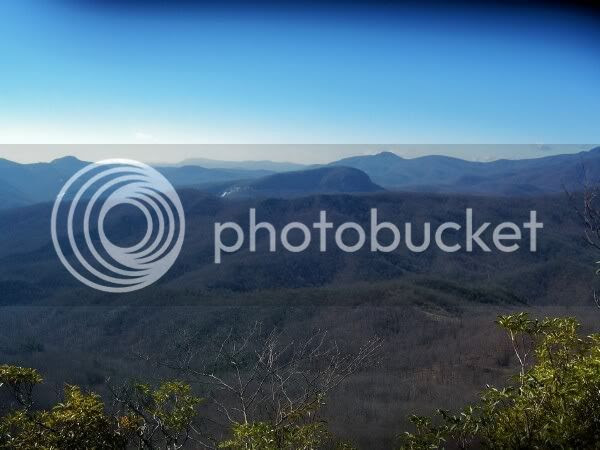 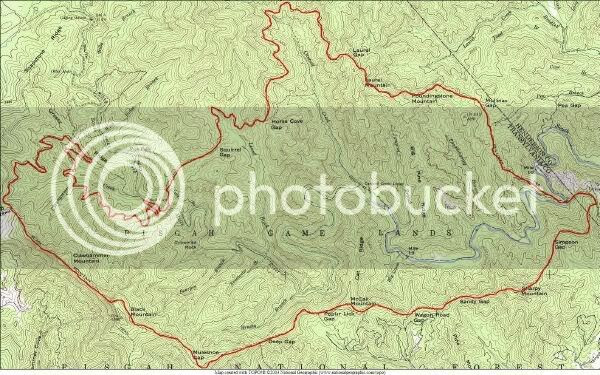 click on the map and topo for larger copies of each.

I have to say first and foremost, even though the classic Laurel Mtn./Pilot Rock ride I did a couple days ago had simular milage and elevation change, Squirrel Gap/Turkey Pen is a much, much more intense and technical ride. Today’s ride took just under 5 hours…

I hope to get a good ride description in later but I need to get a shower and eat some food. For now, a few photos:

We got out early and it was a beautiful morning. Here’s Josh off the bike climbing through the morning mist: 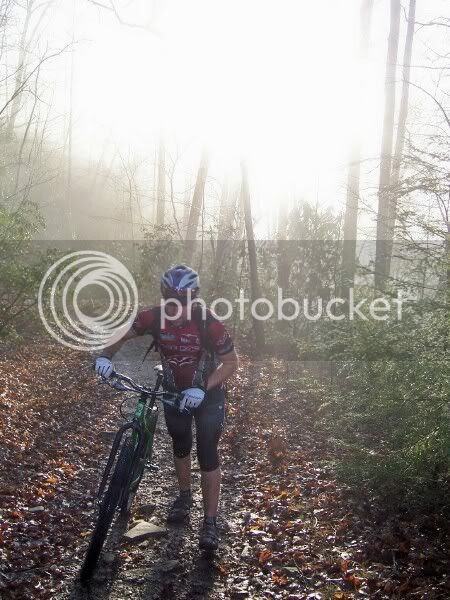 Jessie said ‘I had no idea Squirrel Gap was this much fun.’ while resting at Cantrell Creek 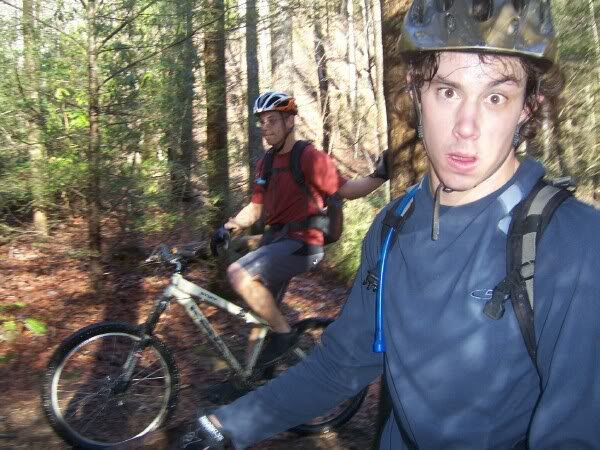 The man, the legend, Mr. Dennis Kuntz decided today would be a great day to ride in his backyard. This guy actually lives on the gravel road leading to the trails…. Lucky! So, you think i should… reducemystemlengthandincreasemytoptubelengthordoyouthinkitwould 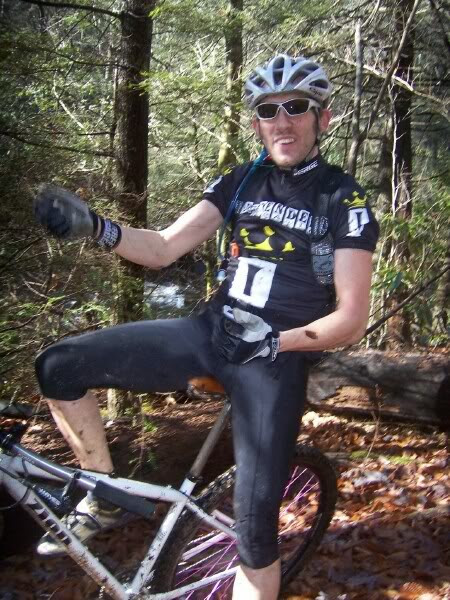 Here’s Jessie at the bridge at Wolf Ford: 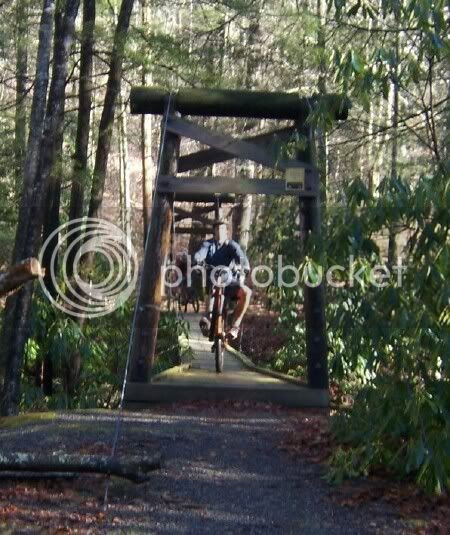 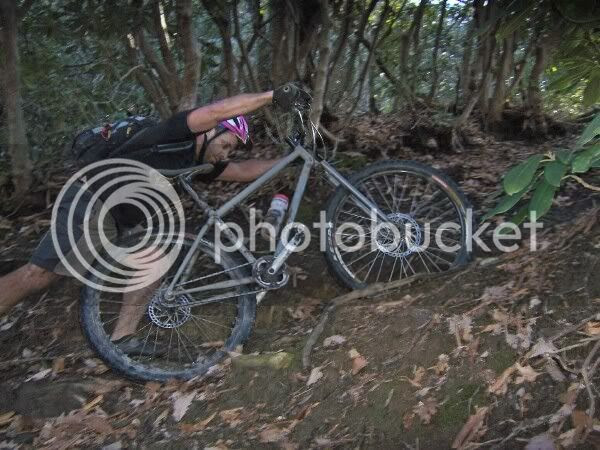 and climbing (on the bike) still on Black Mountain: 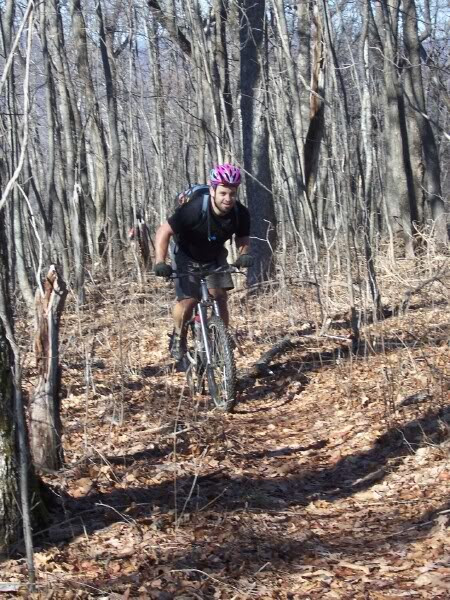 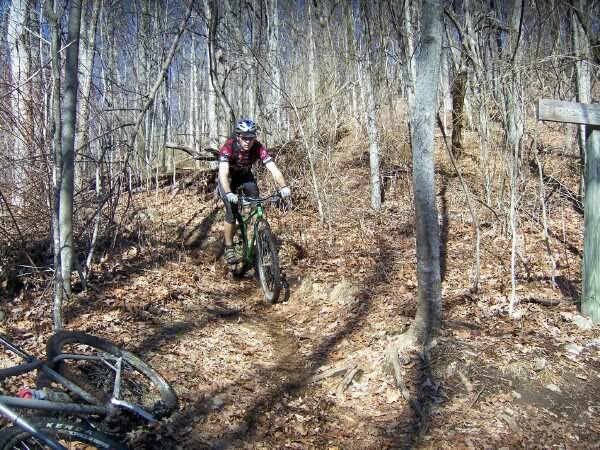 and at the other end of Turkey Pen Gap trail: 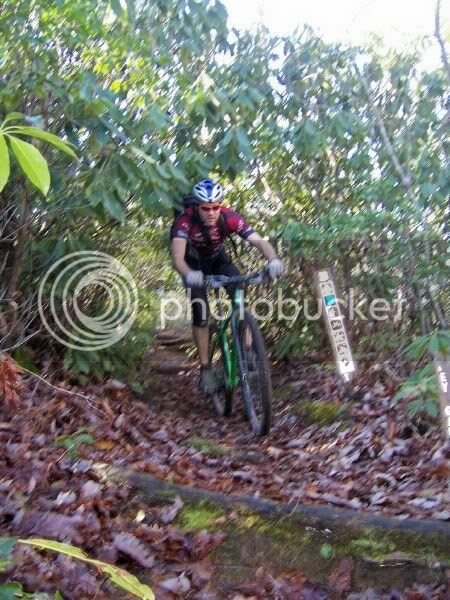 and finally, a vid of Bill… I wish the camera was able to show how steep the trail really is here: