plus a wide assortment of mushrooms, some large unidentified creature crashing through the woods, grouse, more birds....
Vinyard->Riverside->Bradley Creek->Laurel Creek->Mullinax. 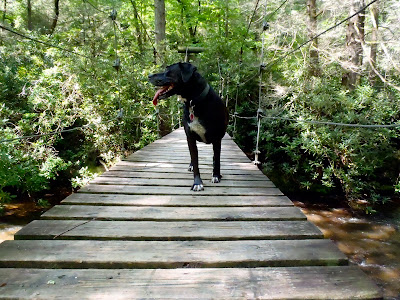 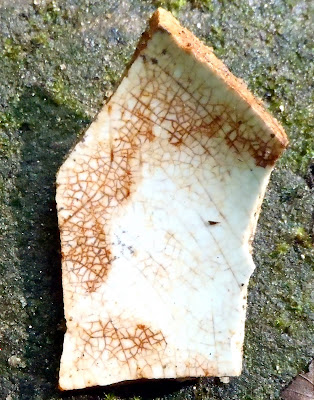 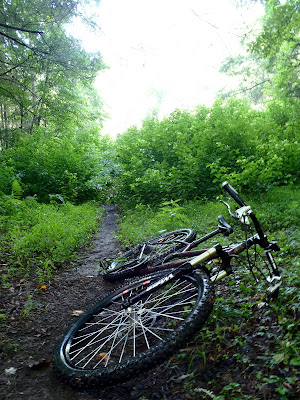 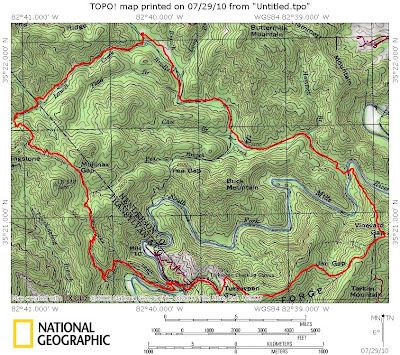 Posted by Eric Wever / Pisgah Productions at 12:50 PM No comments: 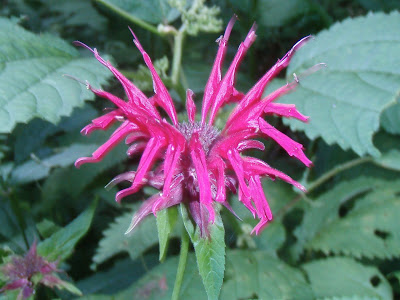 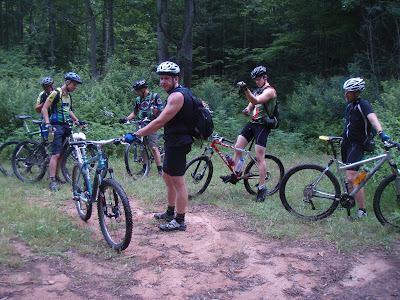 Let's see, it's now the next morning and after a great night of sleep maybe I can scribble (peck?) out a quick summary of yesterday's ride. The whole crew rallied at my house just after 7AM and after a cup of coffee and loading 6 people, bikes, and gear into two vehicles we were headed to the Fish Hatchery. Matt F met us there upping our roster to 7. 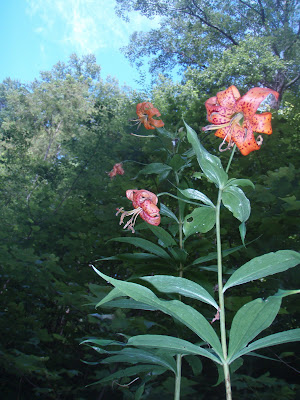 We were on the bikes by about 8:30 and the weather was cooperating perfectly. The temps eventually topped out in the mid 80's for the day with humidity just shy of turning the ride into a swim through the air. The gravel and doubletrack climbs to Long Branch went by quickly with no stragglers. Up Long Branch necessitated the use of the granny gear for the first time of the day and Ian 'The Pony' L. and I took up the last two positions for the climb. 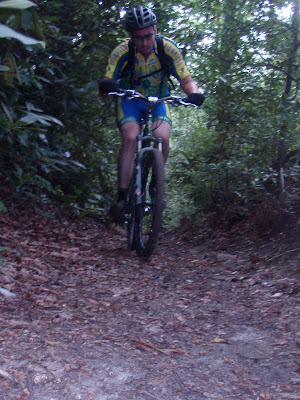 During the downhill in the middle Mike B had a flat, then his spare was flat, so it took us a while to get up to Gloucester Gap. He had waved me everyone on as they flew by so it took a bit for the word to get forward that he needed another tube. Up 140A followed with Mike, Ian L., and I off the back of the pack. That was absolutely fine with me as Ian and I stopped and took in the sights and tastes the forest has to offer in mid-July. Flowers abounded as did ripe blackberries. 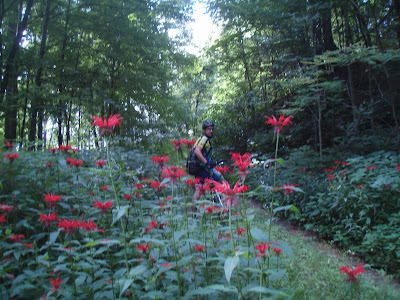 Riding up 5003 is much more tough than 140A and that's the reason I had left some reserve fuel in the tanks. The climb to Farlow Gap gets much steeper and technical after the turn. Ian was a bit off the back but Mike and I would take our turns hammering forward then waiting to make sure he was doing fine. DjD was soon spit off the back of the 'A' group and joined in for the fun of cruising to the gap with the 'B' group. We arrived at the gap just as the 'A' group was breaking out the lunch boxes. A long breather/lunch break/glove change preceded the reason for climbing for THREE HOURS: Farlow Gap. 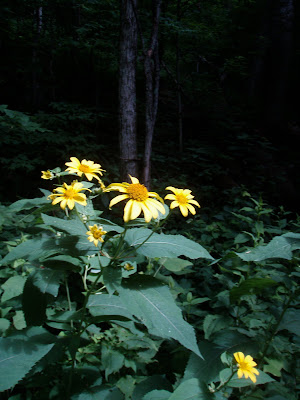 Mike took the lead for the rock garden descent and cleaned it. I was tailgating a little too much and had to come off the bike as he picked his way through the gnar. I decided to take a few photos of the rest of the crew descending then realized that Yes, indeed, I do need a new camera. Not a single photo came out OK. Anyway, We took the time to go to the bottom of the first waterfall for a quick dip 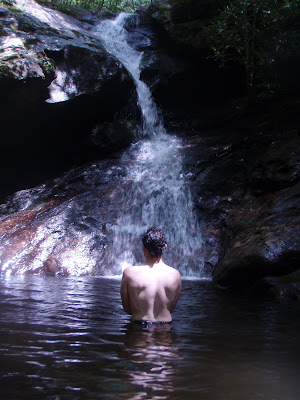 Then railed the rest of Farlow. We all were on our A game at that point and had a blast in the tech sections. I saw Ian B pull some impossibly tight bike handling moves and after watching Mike hit the BIG set of steps with ease, had to go back and try them myself. With DjD acting as a center, or maybe linebacker ready to block me back into the trail I lost my inhibitions and went for it. One of the hardest moves I'm comfortable trying that deep in the forest. 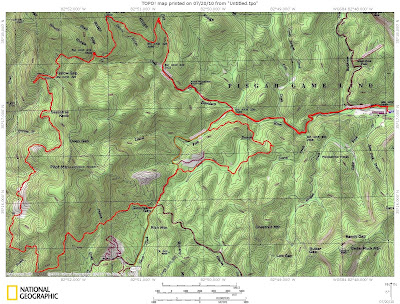 Everyone was just about out of water by the time we were at Daniel Ridge and Matt must have been the most thirsty since he took the lead for the final part of the descent. When we hit the open road I had to look at him wide-eyed and say :'Matt, I knew you were fast but damn! I could hardly hold on!' It was one of the fastest feeling descents of Daniel that I can recall.
We finished with the cruise down Davidson and were back at the vehicles in 4:45 hours out.
Great ride everybody!!!!!

Posted by Eric Wever / Pisgah Productions at 2:37 PM No comments:

After work with ride with The Pony 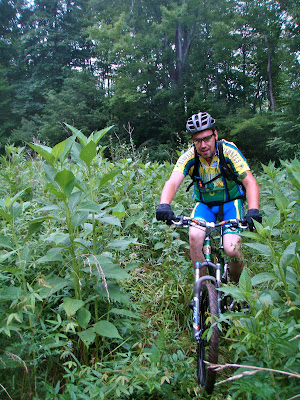 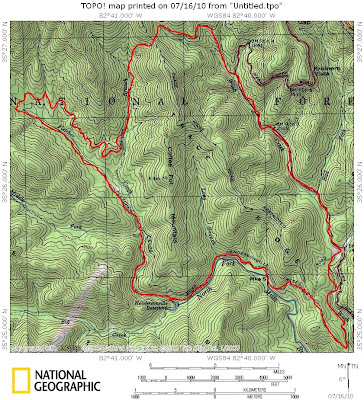 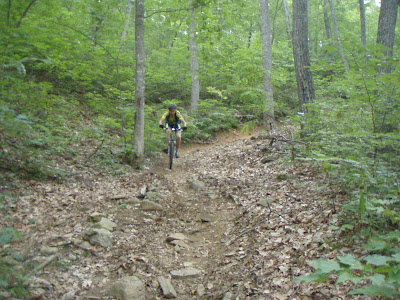 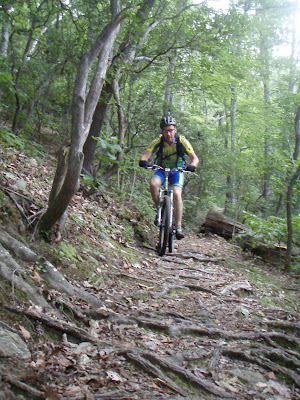 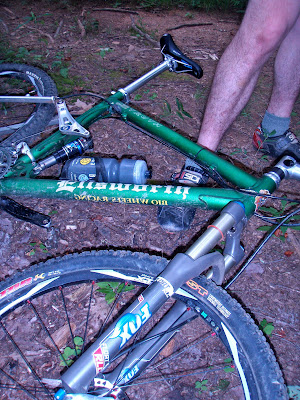 Aaahhh... Summertime in the mountains. 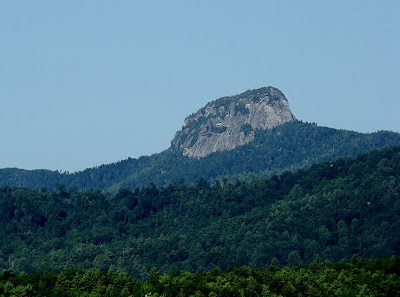 (the above image of Table Rock during today's ride was stolen directly from Bill F.'s bloggy. Thanks Bill.)

If you're looking for something a little different than Pisgah that's still in Pisgah, check out Wilson's Creek. This morning DjD met the 6:30 rally time and we were at The Pony's house just before 7. Fast forward an hour and 15 minutes and we were pulling in at the bottom of Sinkhole in Wilson's Creek to meet Dicky, Big Worm, and two guys without nicknames, David and Aaron. 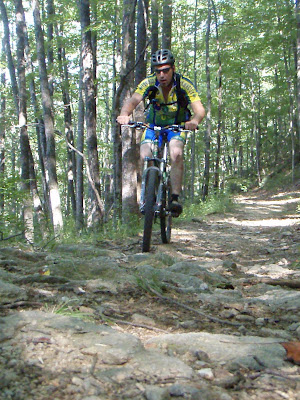 The route started with the gravel up to 181 then 181 to Greentown. Our route for the day: 181->Greentown->Raider's Camp->Sinkhole.

It had two weeks since I had been on my bike but it had been a whole two MONTHS for The Pony so I hung back with him. I got a little ahead towards the top but he was at the top moments after me. I had been fighting coffee-stomach for the climb so a less intense than normal pace was perfect. I was put out front for the first descent of the day and I called Ian to follow. When we got to the first rest I was surprised (considering the pace) that the fully-rigid-equipped Bill was right on our tails. A theme was already developing for the day: Bill was shredding the downhills. Another theme: Ian and I off the back for the climbs, Bill, Ian, and I out front for the descents. 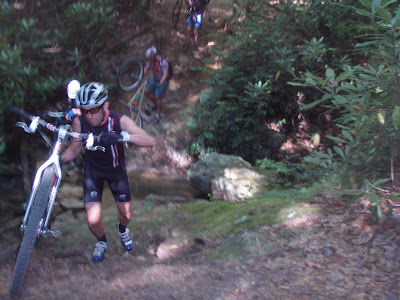 We crossed the river at the bottom of Greentown then wrapped up the 'old-toll-like' climb in what felt like just minutes. The group got ahead of Ian and I again but we were hanging back and talking the entire way. The group was waiting just before the rest of the climb to Raider's. The top part of the Raider's descent went by very quickly as we all railed the berms and took the fastest lines available. We checked one spur trail to see if it was the way down to the waterfall overlook but it didn't feel right to me and I recalled the long descent down to where the trail just.. sorta... runs.... out..... that we had taken years before and the call was made, the right hand turn was NOT where it was supposed to be, and we made our way back to Raider's. Well sure enough the next turn off we saw was obviously the bottom of the overlook spur and we had missed the turn. Was it where I said it wasn't? Maybe so, maybe not. 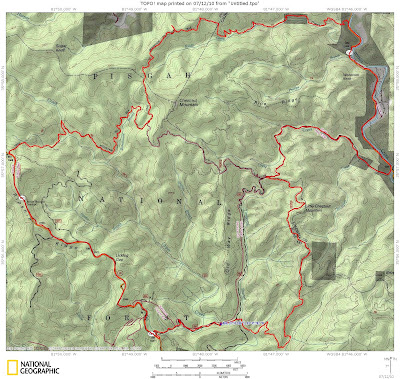 Raider's turns into a rutted out, swoopy, and super tech mess after the spur and we made the very best of it. Whoops and hollers rang through the woods as we were all having great fun. We decided against the steep rocky drop in and were at the parking lot and headed up the gravel with zero incidents. No crashes, No mechanicals, and No bonks. The 'no bonks' part was about to change though. We stopped at the water fountain that's just before the store and I realized my stomach had again taken a turn for the worse. I think it was the electrolyte stuff I was trying in my camelbak for the first time but I can't be sure. Anyway, Ian was again off the back for the climb and I was MORE than happy to be his carrot and ride my own slow-ass pace, that was just fast enough that I couldn't always see him when I looked behind. Aaron was starting to feel it, too and was a perfect carrot for me (but I could hardly catch him even when he was walking, uuugh). By the time Ian, Aaron, and I arrived at Sinkhole Saddle we were all starting to look like death-warmed-over with me feeling the worst. The four others took off up to Sinkhole trail and were out of sight in moments, Ian fell off the back, and Aaron and I took it easy and talked about the things that people talk about when they've just met and they're now four and a half hours into a ride. Whatever that was :)

Sinkhole was our final trail of the day and I was content to let everyone go ahead buuuutttttt.... I was the only one willing to go back and try the steep chute to log drop move a second time sooooooooo..... I nailed it (photo of after the chute/setup before the drop by Bill F.) 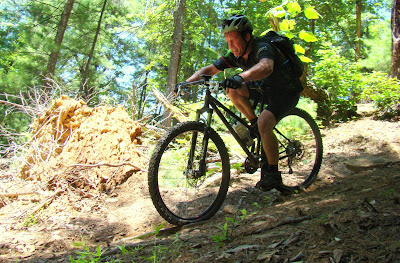 and stayed out front for the rest of the descent. Oh, we stopped at the sinkhole, just about everyone cleaned the BIG sinkhole chute, we all attempted and completed some serious tech moves on the goat section, and once at the Jeep and the Dirty Toaster took refreshing dips in the creek. We sat in the creek and I was reminded of a day long ago when many of the same people were sitting in a creek after a long ride in North Georgia. It's amazing how time flies. It's amazing that I still know these guys. It's amazing that we are all still healthy enough to ride 25 miles IN the mountains. Excellent ride everyone, old friends and new.

Unrelated to the ride, here's a shot I like of Sophiedog on a walk the other evening: 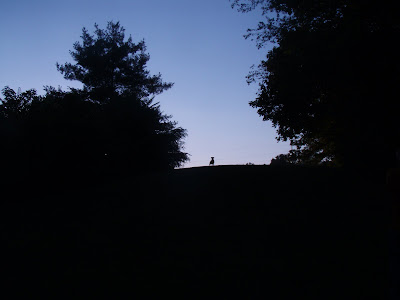