I just walked in from an excellent ride on the 'ole orange multibeast. I was called into work just as I was preparing to go so I didn't get the super-early start that I had planned. No matter, it was just a little hotter at the end than it otherwise would have been. It turned out to be a beautiful day with highs in the low 80's and sunny skies after the last of the morning mist burned off.
The route for the day: From Bent Creek Gap-> Blue Ridge Parkway->NC276->FS1206->FS5000 back to the gap. 33.2 miles, 5200' climbing, 2:58 time out. 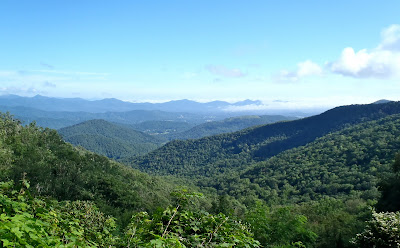 The warm-up on the parkway caught me off guard. It felt like my heart was going to pound out of my chest or maybe just come to a sudden stop like an engine locking up. After about two miles of climbing though I was able to start to stand and hammer. 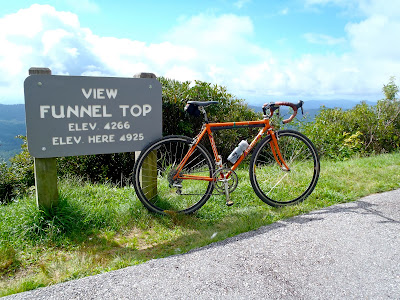 The climb up to the Pisgah Inn still went by a little slower than I had anticipated, just under an hour, but I did stop and take in the views a couple of times. I guess just under an hour actually wasn't that bad.

Just past the Pisgah Inn the parkway was under construction and a group of cyclists were milling about waiting for the light to turn green. I met this guy, John G., who was riding this bad-ass old StumpJumper way up on the parkway. Actually, what looked like his entire family was along on all his old bikes. Pretty cool. 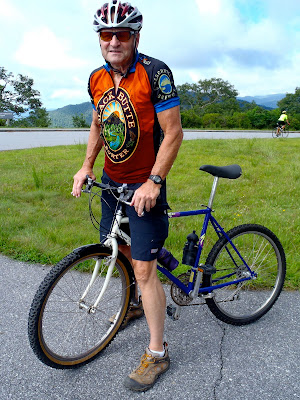 The NC276 descent was a freaking blast. I had a carrot ahead of me by a few hundred yards, a big ole truck that I hauling through the corners. I slowly reeled him in and he broke off to the left to let me pass right in the final straight-aways to FS1206. The way I pulled away I must have been cruising about 45mph or so. 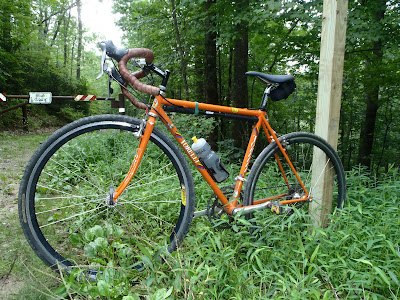 So, the turn onto 1206 was next and during the 5 miles of mostly flat gravel road I was absolutely flying, or at least it felt like it. The 53x12 max gearing and 80* of pressure in 28mm wide tires flies just about anywhere. The whole 'Monster-Cross' concept intrigues me because the descent to Bradley Creek and down from Yellow Gap to NMRC were equally scream out loud scary and 'whoop' out loud fun on the 28s. I want a bigger tire F&R, but with the same road-bike handling I've got right now....

I stopped at NMRC for more water (I consumed 5 tall bottles by the end of the day) and turned onto 5000 for the return trip to the parkway. Once I was up the pavement and past the Trace Ridge turn it really felt like I was flying on the flats. I was pushing the big ring as far as I could, which ended up being right about the first gate... The road gets steep for a while there and I was unable to get out of the small ring for the rest of the climb. I had looked at my phone at NMRC and I knew I had about 40 minutes left to beat my 3 hour goal and when I looked up and noticed I was at the Jeep... 38 minutes had passed. Excellent. 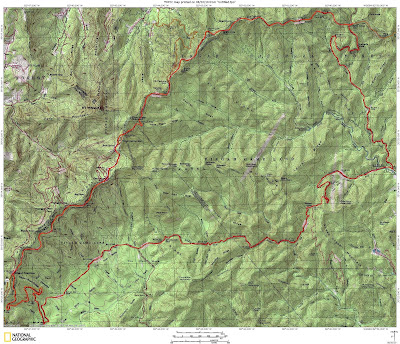