Destination: Wilson's... and we ran the exact same loop as the last time I was up there. Raspberry->Greentown->Beehive->Sinkhole. 5 of us camped near the bottom of sinkhole on Friday night and another 4 arrived in the morning. The rollcall: Jut Rut, Jody F., Tomato, J, Zach 'H8' B., Joe P., Mike B., Mike R., and myself. Small turnout but a perfect sized group for traveling fairly efficiently through the woods. ZB left camp early and climbed 181 to the start. The rest of us shuttled... 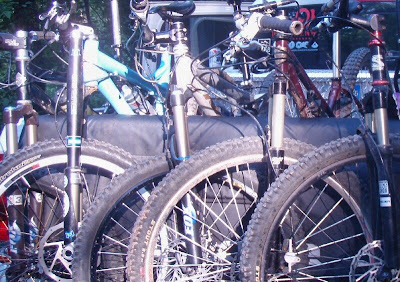 Raspberry is a super fun descent and a great way to start the day, at 100 miles per hour. Jut and I took up the number 1 and 2 spots in line for the descent, as it would go for most of the day.

Here's Jut hitting the berm/kicker at the bottom of Raspberry:

(HINT: hit PLAY then PAUSE and let the videos load all the way before watching.)

Jut Rut on Raspberry from pisgahproductions on Vimeo.

and if you listen carefully you'll hear me casing the rock launch after the log drop:

Oooph! from pisgahproductions on Vimeo.

When the first climb came, back up to 181, I was feeling great and kept the pack in sight until just about the very top. We took an extended break at 181 then next was Greentown, the trail I've probably done more than any other in Wilsons. Jut and I took off ahead and were moving fast, we regrouped about halfway down, and then hauled ass to the creek. The climb up to Beehive was hot hot hot but went by pretty quickly. We ate lunch at the little waterfall along the way.... 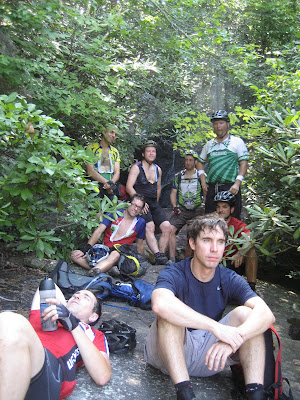 but otherwise everyone kept up a great pace on that 'old toll like' trail. Following Jut down beehive made it much easier than the last time I was out there and we flowed down at breakneck speeds. There is zero room for error on beehive yet Jut was hitting every kicker he came across. It made for a very entertaining descent. We took a 2 minute break at the camp, 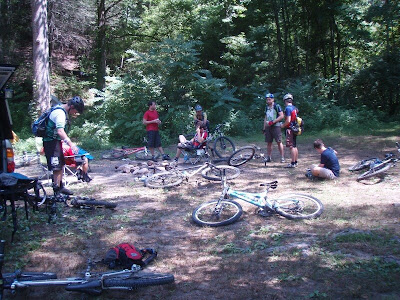 ZB was done, and 8 of us continued onto Sinkhole. By the time we got to the top of the fireroad climb I was drenched in sweat. 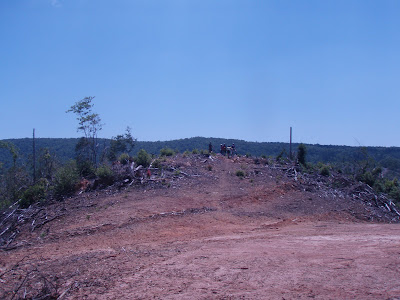 It was now very hot hot hot and the turn into the woods and the shade it provided was a welcome change. Once on the sinkhole descent I couldn't hold Jut anymore. In a flash he was 25, 50, 100 feet ahead of me. Another regroup at the sinkhole then down to the knife-edge benchcut descent finished our day. The time out was just about the same as the other weekend but with more than double the people. Not bad. I'd go so far as to say, it was a fast group. I was near the back (but not OFF the back) for the climbs, and I was hauling ass going down. Excellent day. Excellent people. Excellent trails.

Big Rocks, Mike B took a shortcut, I smashed my head on a low hanging tree. Lower Sinkhole:

Untitled from pisgahproductions on Vimeo.

Here's a vid following Jut down the Sinkhole chute and into the benchcut:

Untitled from pisgahproductions on Vimeo.

Posted by Eric Wever / Pisgah Productions at 6:41 PM No comments: