Erinna and I got an excellent run in tonight. 45 minutes around the neighborhood with the dogs. I asked Erinna to ‘pick up the pace’ (she was pacing me the entire time) for the last few hundred yards and suddenly I felt my strides double in length and we were flying! I’m sure I’m going to feel that for a couple of days.
Posted by Eric Wever / Pisgah Productions at 03:07:18 | Permalink | No Comments »

Dicky isn’t the only one running…

Erinna has been running 3 times or more a week for the past couple of years and I’ve not joined in on that particular brand of torture until… very recently. Drawn by the idea of exercise from the front door, and an alternative means of raising my heartrate in the cold months, I decided to get off my butt and start running. A few weeks ago I got out for about two miles and came back hardly able to walk down stairs. Erinna and I did the same loop a week or so after that and whatayaknow, I didn’t hurt as bad as the first time. Progress? Well, we went to Williamsburg for my sister’s birthday / Thanksgiving and inbetween feasts we got out and went further than I had run since I was in the Air Force…. Maybe 5 miles? I was mentally unprepared to go that far that day… but as it turned out the run to Colonial Williamsburg was just far enough to get a good, solid, warm-up in. The miles up and back on Duke Of Gloucester Street were fun, slow, and not all that hard. The run back to my sister’s house kicked my ass though… and my knees were feeling rickity for a good few days.
Today I decided to go at it again. Fresh off the longest run in 13 years I got in a solid hour around the neighborhood and down to the mellowdrome park. The sculpture show is still going on so the run around the park was slow since I was taking in the sights… hell, it was slow because the pace Erinna and I kept in W’burg was slow…. and that’s a fine pace for me for now.

Rich has challenged me to join him for a big run in January…. if I keep this up I just may do it.

Well, it’s taken me a few days to process this ride enough to write it down. I’ll just quickly summerize: Mojo? None. Head in the game? Not at all. Skills to pay the bills? waaaaaaaay in debt.
I just couldn’t get it together. Every root knocked me off course. Every leaf hid a gnome ready to throw me to the ground. I walked the uphills, I never properly warmed up. My light seemed inadiquate on the downhill, like I was traveling 50 feet per second and it was only illuminating 35 feet ahead. I lost the back end during a tech section and I started to fishtail like… a motorcycle out of control…. I almost highsided. I was so happy to be in the parkinglot when I got there because the real danger was behind me. I tried to salvage the ride by putting the hammer down up the gravel back to the Jeep and ended up with a solid time of 56 minutes for the loop…. and I got out of there as quick as I could…. before something bad happened!
Posted by Eric Wever / Pisgah Productions at 02:02:28 | Permalink | No Comments »

Erinna and I got out for a fun Bent Creek ride Sunday. She had tons of studying to do but I felt it was my duty to pull her away from the books (after 5 solid hours) and go enjoy the fine Fall afternoon we were having. We took Sophie dog along and started at Hard Times trailhead. Homestead->PineTree->Explorer->get a little turned around->Lower Sidehill ended up being the ride, 75 minutes or so of fun. Highlights: Thomas M. and his (5 year old?) little boy ripping it up, Trish S. and her dog at the bottom of Sidehill, and Sophie reaching 18 mph! on the campground connector. Oh yeah, and realizing that Erinna and I are in a place where we don’t have to go far, like 15 minutes or so, and we’re riding trails that most of the nation would kill for…. and we have so many more trails at our disposal…. that are even better.
Posted by Eric Wever / Pisgah Productions at 02:00:36 | Permalink | Comments (1) »

Saturday I met up with Scott from Indy, Jonothan L., Valorie N., Dennis K. and Clay F. for what ended up being a short ride for me. The plan was to do the classic Big Creek loop but mechanical issues held me back. Dennis and Clay hauled ass up 1206 to Yellow Gap and I was pleased to find Jonothan and Valorie content with keeping a slower pace up that three mile fire road climb. They were talking trail politics, tomato and I talked racing, we had a chill fun warm up to the gap. We picked up Scott from Indy (after a tour of his campervan/mobile palace) and hit Laurel at full steam. Dennis, Clay, Jonothan, and I were having a great go at it and eah time we stopped to check up, Valorie and Scott were right there, one twist or turn behind. About the time I decided Clay was having a much better day than me and I let him around … my chain dropped… and I thought back to a few nights ago at the shop…. when I noticed my chain was loose…. and I proceded to strip out one of the sliding dropout set-screws…. F$@%!…. I put the chain on and watched the train leave the station. I got back on and tried to catch back up and…. ooomph! the chain dropped again. OK, that sucked….. I got back on and tried to spin nice and steady… keep it rollin’….. hit the techy rootyness just before the gap and… it dropped again. I got to the gap feeling defeated and decided it would be best to head back down the hill, get over to Pro Bikes before they closed and have Jason or Alex start drillin’…. so…. that’s what I did. After a series of ‘oh wells’ and ‘next times’ I retraced the ride back down to the car. I hope everyone had a great ride after I turned around, I was having a blast!
Posted by Eric Wever / Pisgah Productions at 01:50:13 | Permalink | Comments (2)

Ian ‘The Pony’ L. and I went on a fun ride yesterday: North Slope->Black->Thrift->Grassy->Sycamore. Yes, very simular to the ride I did the day before but hey, when you’ve got something good going on, why do it just once? Plus, Ian isn’t in the best shape these days and when he expressed interest in heading into the woods, I knew it was best to plan a non-epic. We arrived at the PMBAR start/finish at about noon and went over to Davidson River campground first. It was shaping up to be a beautiful day: clear skies, temps in the 50’s, and most of the leaves were still on the trees. The color is starting to wain though, even though we’re having a LATE fall….winter IS on its way. Anyway, I have only been on North Slope a handfull of times and had never navigated it sooooooo the plan was to putz around and figure it out. I realized during the first climb that I must’ve always been totally anerobic when arriving there because I just followed the signs and found the way easily but… with no recognition of ever being there before. Well, that is until the Art Loeb connector, on the ride the day before we had stopped there for a breather. Ian and I made good work of the rollers to the descent (Ian went back and tried every tech move a second, even third time if he chickened out rolling into it) and rolled into the ampitheatre quicker than I had anticipated. Next was Black-> Thrift. We rolled right past the truck and attacked the hill. Ian stayed on the bike nearly the whole time spin spin spinning his way up in granny gear. I would ATTACK!!!! then get off and rest, then ATTACK!!!! then rest. ATTACK!!! rest…. ATTACK!!! rest… Well, that got us up to Thrift in great time. A bunch of yahoo’s (edit) were headed down Black as we were headed up and they must not have gotten the memo…. downhill riders yield to uphill riders…. anyway, the hotwheels track, er, I mean Thrift was next and we R-A-I-L-E-D down it. Thrift is so much fun from the top. It’s 4-6 feet wide with big swooping turns that you hardly need to even brake through. Jumps, berms, swoops, straightaways at a 30* pitch…. scary-fast. Next was grassy road to Sycamore, then Sycamore Cove Loop back to the pavement. Ian had neverbeen on Sycamore so it was definately a treat for him. I had been there just the day before and was feeling pretty confident. I continued the theme of ’scary-fast’ but this time on 3′ wide singletrack and across creeks, with big rocks, logs, drops….. fun fun fun! Ian was nearly right on my tail for the whole descent and as we flew towards the road Ian let of a YEOW! scream and ding ding ding his handlebar bell, I sure sign he was having fun. Thanks for coming out Ian! You always come up with the craziest shit to say…. It’s great to see you on the bike again.

So no pictures until I get a new camera…. if anyone want to know what I want for Christmas….. how ’bout a waterproof, shockproof digital camera like one of these beauties:

Yesterday I met up with Tomato, stiched up Kuntz, SingletrackPig, and G’ville Sam(antha) for a nice three hour ride. The meeting time of 8:30 felt especially early to me as I had gone out to a show the night before (Rev. Horton Heat, Hank III, and Nashville Pussy) but after a little ribbing about the fact that I looked like something the cat ragged in….. we were on our way. Our route: Thrift->Grassy Rd->Sycamore->North Slope->477->Bennett

photos stolen directly from Biking in a Zen Manner: 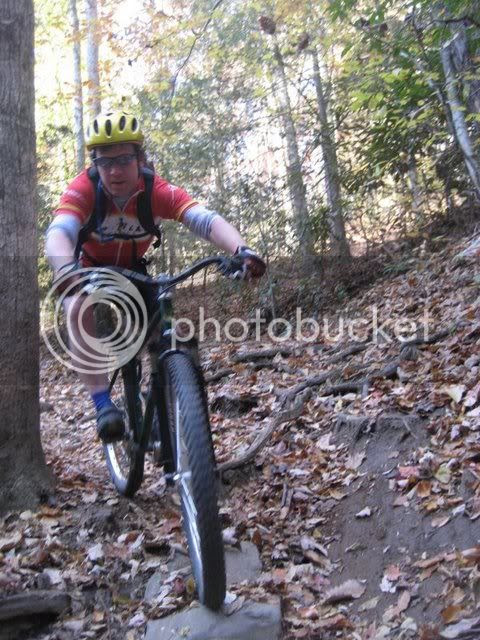 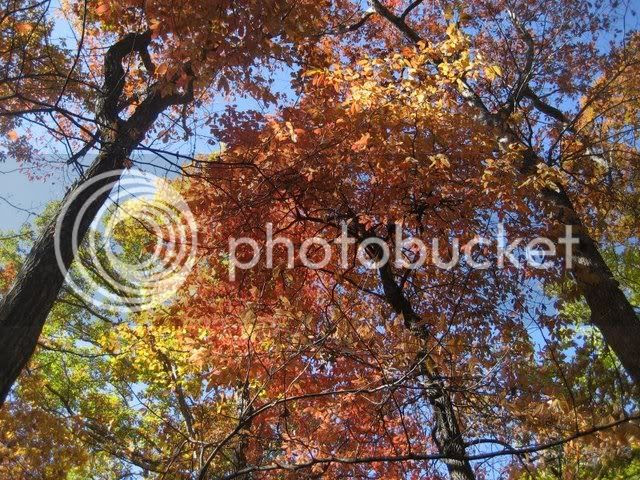 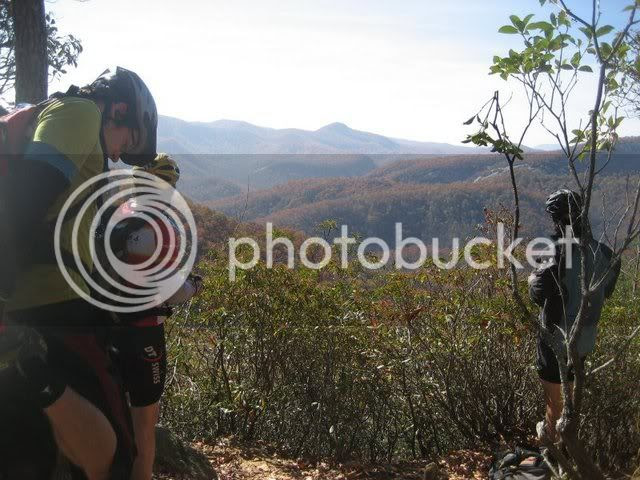