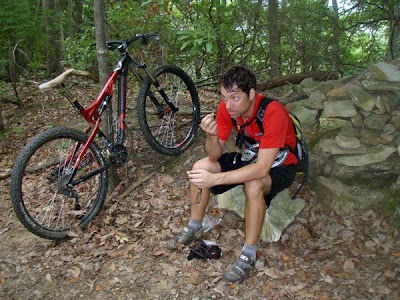 'What the hell was that?'

Jody F arrived at my house at exactly the time I had told him to. Unfortunately, I wasn't near ready to go but fortunately Jody is just about as chill as one can be. Two cups of coffee, a brake pad change, some hangin' with the baby, and an hour later we were on the road undecided about our ultimate route for the day.
We hopped into his notminivan and were immediately in stop and go traffic on the interstate. The decision was quickly made to change all the plans and to head over to Trace via Bent Creek and get out of the traffic right away. ...->BCGR->5000->Spencer->Trace->Wash Creek->5000->BCGR->...

We then climbed back up past the notminivan and all the way to the parkway. When we finally got to the tunnel I saw a familiar face, none other than Eric S. of Cane Creek/Hawley/Bicycles East(?) fame waiting for Hoffencharders to arrive for their presidential fitness test. I know, that doesn't make a lot of since to most of the people that read this but, it makes complete since to a few people, and that's all I'll say about that.
Did I mention it was HOT and HUMID? No? Well it was hot and humid by Asheville standards. I was having excessive sweats and chills at the same time during the climb. The descent to Spencer was a welcome cooldown.Up 5000b to Spencer was next and Jody put the hammer down. Once we passed through the steep field (where I was able to stay on) it took everything I had to hold Jody in sight. Erinna and I had gone out the night before with Zoe to the Downtown after Five live band/party... was I feeling that? No.... why is my breath feeling soooo hot? uuuugh... It was hot.... and I was parched. I hope that was it because man, Jody just pulled away on that climb. We regrouped at the gap, regrouped at the top of the littlehellclimb, and I took the lead for the first descent. Trace Ridge is in phenomenal shape right now and we traded places, back and forth, all the way down to the parking lot. That was one of the quickest descents of Trace I've done in quite a while. While I was leading I got into a full two wheel drift! Thanks Jody! I could hear your bike's chain slappin' behind me and I knew I had to keep it pegged. I took the lead again for lower trace->wash creek and made it to 5000 feeling like I wasn't looking forward to the monster of a climb ahead. Jody hung back with me, pushing me the entire. way. just. hard. enough. that we made it back to the gap in great time. The high speed descent down BCGR to the notminivan was next and after a quick breather we decided One more climb finished the day, back up almost all the way to the parkway.
Thanks for coming out Jody!
Posted by Eric Wever / Pisgah Productions at 2:33 PM No comments: