Last night I met Mike R. at North Mills River Campground and we were on our bikes well after dark, starting at about 8:30. We were both well prepared and were on the bikes moments after we arrived. The tempo up 1206 was super high for a warm-up but I had zero concerns about it, I was actually pushing the pace and felt great. 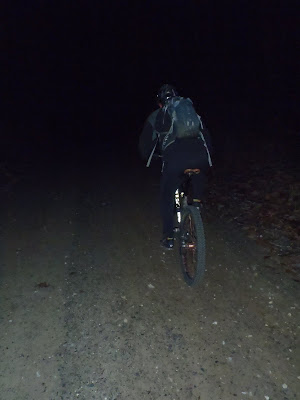 We took a breather at the top and I commented that I wish we had taken a look at the time before starting because that may have been one of my faster ascents of 1206. Anyway, Mike took the lead for Laurel Mountain and kept the pace pegged at full-speed-ahead. I was able to hold on until after our next break, at the meeting log. After that Mike was able to just pull away and leave me in the dust. It was all I could do to not let his light slip further and further away into the distance. Oh, it may be a good time to mention the nearly full moon and relatively warm temps. It was a trip being able to see Mike's light moving through the underbrush from around the corner while also being able to see the contours of the hill because of the moonlight. The tall trees cast long straight line shadows through the woods, too. The temps were in the low 50's, perfect for the hammering that we were doing. I caught up with Mike and after an encouraging 'just one more gap' we were setting up for the descent to Big Creek. What a blast that descent was. I wish I had lowered my saddle as Mike had because soon I was laying on my face. I couldn't get far enough back/center of gravity low enough and my front wheel washed out. Before I could even get my arms out I saw the bright flash and was wondering if my nose was broken and using my tongue as a sensor, started checking for all my teeth. Well, all my parts were intact and I restarted the descent with a bit more caution. We took a nice long breather at the bottom of Little Pisgah Ridge 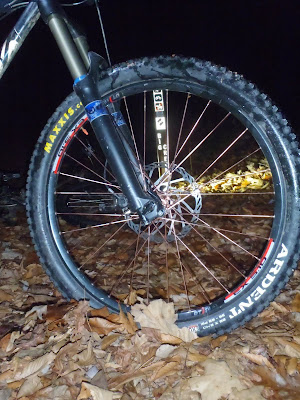 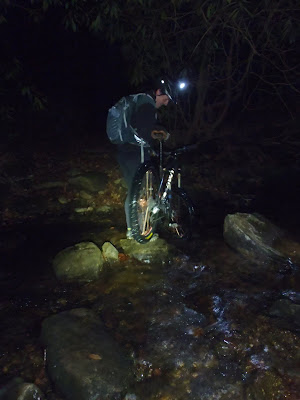 then hammered, then step stoned, then hammered all the way to the reservoir. Just before the reservoir I went down again, this time it was more of a stumble than a crash but I was tangled in the bike and four feet below the trail in an instant. Despite the second crash I was still feeling good enough to race Mike back to the Trace Ridge parkinglot. He won that race but it felt like my fastest ascent of that road to date. Mike held the lead for Lower Trace and was able to outright outrun me in the steep chundery stuff at the bottom. To finish the ride we got our feet wet in North Mills River, took Fisherman's back to the vehicles, and were finished in just over three hours. Thanks for coming out Mike! That was a ton 'o fun!