Mike R. and I hit Kitsuma this evening starting just after 6PM. 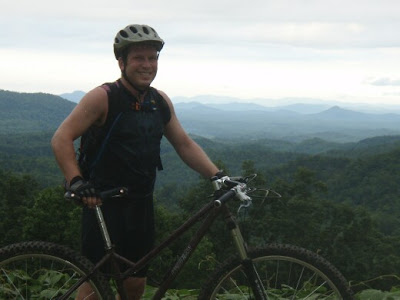 After showing off the new rig we were on the bikes and headed up the switchbacks. Mike took off and I spun along behind trying my best to clean everything I could. One dab and one complete stop later I was at the peak. Mike had made it there about a minute before me and with just one dab. He sent me out front for the downhill since I had been there just a few days before. The weather was interesting today, hot and sunny in Asheville but as we drove up to Kitsuma a rainstorm had just passed through. Even though I had just been there the trail was completely different. It was slick and slimy over the roots, there were a couple standing puddles, and there was no way I was hitting the jumps today. The texture of the trail was, shall we say, inconsistent. Who knows what your tires would (or would not) grip on to upon landing. Anyway, despite the conditions we kept the speeds far above safe. We just kep

t two wheels on the ground…. but…. we did cover the ground very very quickly. Big wheels+Big tires+Big fork= a fast bike in any conditions. It was Mike’s first time on the repaved old 70 and we kept the pace high, chatted about life and the like, stopped at the overlook for just a quick second, then continued to keep the pace high all the way back to the vehicles.
Thanks for coming out Mike. It had been too long.

I got out this AM for a little solo Pisgah Ranging…. From Turkey Pen->SMR->Mullinax->Squirrel->SMR->5018->Horse Cove->Cantrell->SMR->66 jumps.

This ride started like so many solo rides, I told Erinna I'd be starting at Turkey Pen but that I didn't exactly know where I was headed after that. There are so many options once you hit South Mills River trail, there are probably 100 different ways to con nect everything down there. Anyway, I first started with Mullinax to Squirrel. I knew I was headed to Cantrell, at least. I passed Cantrell and decide to check up with myself again at Horse. At Horse I was feeling GREAT and put the hammer down and headed to the other end of SMR. I took my first real break at the big camp at Wolf Ford and had to decide if I wanted to take Turkey Pen Gap trail back to the Jeep or head another way. I decided to head towards SMR Road because I could still either eventually head up Pilot/down Laurel orrrrr as I did decide to do, head up 5018 and back towards the side of the forest I had to get back to soone r rather than later. I sure am glad I made that decision because I will never forget the next part of this ride. 5018 climbs to Horse Cove with quite a few descents/false flats along the way. I was just riding along, rocking out with the ipod in one ear, pushing h ard on one of the flats, when all of a sudden out of the other ear I heard a quick thtiktiktik and saw a rattlesnake strike at my front wheel. As my leg passed by I saw the snake still recoiling, standing up on the end of its tail exactly like you'd expect a viper to do. I had startled it. It scared the everliving piss out of me. I screamed, not like a little girl, like a 37 year old man that had just been struck-at by a poisonous monster miles and miles and miles away from civilization with no help at all close by. Adrenaline kicked in and I flew up the hill to Horse. I didn't stop at the top, I just headed right back into the woods. Crossed Squirrel and continued on Horse all the way to the bottom of Cantrell. I had been watching the clock and knew I was making good time so once I was back on SMR I tried my best to really put the hammer down to make good time back to the Jeep. Up the one mile climb that is 66 jumps to finish and I was done. Solo riding in Pisgah is always an adventure. 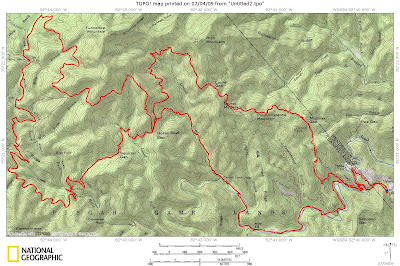 I got out this afternoon for what turned into a memorable ride…. 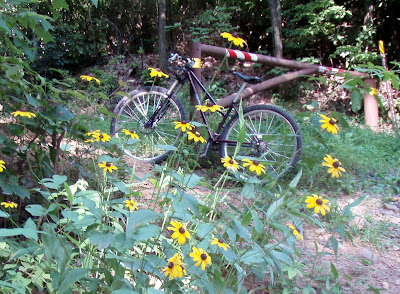 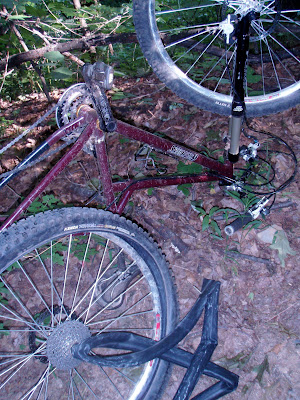 There is a picture missing here. The one I missed of the guys that drove me back to the Jeep. Oh well. I remember them. They were kind.

OK, so real quick I’ll describe this ride. DjD and I were supposed to get out but… having very similar jobs, I understand why he had to bail. I got to the Spencer trailhead a little ofter 5pm and was quickly ascending to Trace. Gears are great. I pounded the less tech sections and didn’t quite clear the techs. Without a break I went for the hell hill (again didn’t quite clean it) and on to the Trace downhill was next.
So, I don’t mention it here often but I say a lot of prayers on the trail. Not just ‘Please God let me not kill myself’ but a lot of ‘Thanks for my health… Thanks for letting me be here…. Thanks for….’ but this time I asked directly for a non-injury and INSTANTLY I heard and felt the pssssssssffffffffffffffffttttt from the rear. Damn? I fixed the flat, pumped the tire 175 strokes, got going, and the very next tech section it happened again, another flat. I knew right away that I didn’t have another tube. I didn’t have a patch kit either. Fuck. I was halfway down Trace…. so decided the only thing to do was to keep the heartrate up and run to the Trace parking lot and hope for a ride back to Spencer. Well, you couldn’t have scripted it any better. Three guys (inlcuding a 12 year old) were just finishing up fly fishing and were happy to drive me up the hill back to the Jeep. Thanks Guys!

After the ride I met Erinna out for a Michelle’s surprise B-Day party. Wooooo!!! Birthday Girl!!! 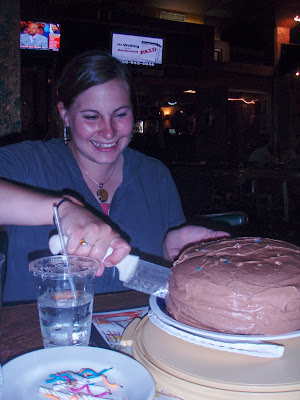 DJD and I got out for a 90ish minute ride today, the second ride on the PR2.0,… KITSUMA.

We met at 4pm and were on the bikes slowly. Up the switchbacks by 20 after or so was first. The front end still felt a little tall despite yesterday’s swappage but I still had a respectable run at the switchbacks. Dennis did, too. We stopped very briefly at the overlook then up to Kitsuma peak. There were a bunch of Boy Scouts at the top and as I peddled into the first descent I had stragglers on my mind. I saw them out of the corner of my eye as I lanched off the first of the series of hucks Kitsuma has become known for. Long gone is the Kitsuma of past, a straight away as fast as Trace, now it’s full of rooty tech balls and log drops and built launches. Up the middle climb was easier than the first climb, maybe because I was warmed up, maybe because I was learning the bike, and the second descent was upon us. DjD had an unscheduled dismount during one of the switchbacks going down and I taught how to wrench a chain out from between the spokes and cassette. We both hit the first log jump with great success then on to the final singletrack climb/descent of the day. Mike B had told me that all the jumps were ridable now but as I ran across the final one I didn’t believe him. I scoped it, saw the landing, and went for it before I could second guess myself. I landed short but without harm. I ran back up the hill for a another try and nailed the second attempt.

We were in the campground waving at a picnic of 60 y.o.’s moments later and on to the climb up Old 70.
Old 70 was almost as much fun as Kitsuma. No, seriously! It was my first fast climb with gears in three or four months and I felt great. DjD and I would spinspinspinspinspin then one or the other would give up and fall behind. Then I would stand up, upshift, and crank it out. By the time I was done I was 50 yards ahead of D. He’d catch up and I’d do it again. Needless to say we were done with old 70 very…very quickly…. 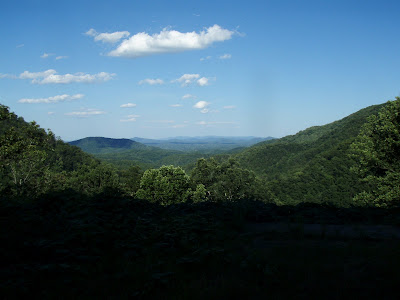 Thanks for getting out on a Tuesday Dennis!!!!