I just got in from an excellent ride with a HUGE crew. Let's see if I can get everybody: Rich D., Bill F., Eric C., Mike R., the other Eric W., Drew H., Jerry, Bill Nye, Lance, Craig, Sophiedog, and myself. Is that everybody? 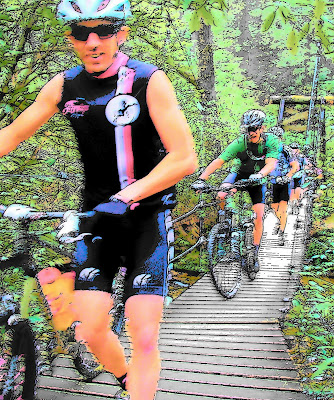 Our route for the day: S.Mills->Mullinax->Squirrel from one end to the other then back. I dropped down Cantrell->S.Mills with Bill Nye (Ryan) and Lance to finish the day while the rest of the crew went for Squirrel->Laurel Creek->Bradley->Squirrel->Mullinax.... well except Mike and Eric, they were headed to Pilot->Laurel once we hit Wolf Ford. 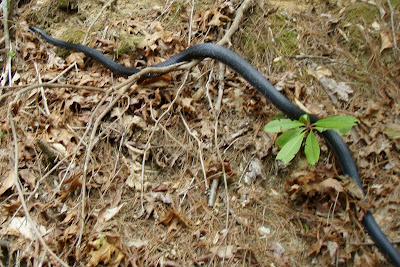 More on that ride later.

On Thursday evening I left the house with a heavy heart, not knowing if it was the right thing to do or not. Floyd was getting weaker and weaker but there was only so much sitting with him and patting his head that either of us could endure. I had to pick up Erinna and Zoe at the airport at midnight so I made up my mind and drove out to Yellow Gap for what had to be a fast ride of Pilot->Laurel. I started a moment after 9PM with the cool/cold descent on 1206. My mind was all over the place, hardly on the bike at all, when I passed right by the bottom of Pilot and continued on all the way to Funneltop Mountain Road. Crap. I retraced my steps to Pilot, checked the time (9:40) and without a further break, started up Pilot. Pilot was easily as hard as I remembered it ever being. I was moving forward at all times and I did have to walk a bunch so it took over an hour to get to the top. Again, along the way my mind was all over the map. I remembered a Summer Solstice Sunrise ride I did with Dennis H (about the time Floyd found Erinna and I) and how we climbed the same trail before picking up Erinna at the airport. I thought about Floyd a lot and still wasn't sure that it was the best idea to be out on the trail. I was hungry and thirsty and in a rush when I made it to the connector (10:48) 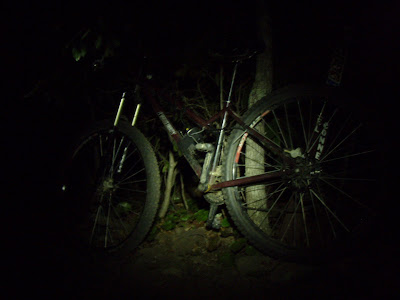 and took only the slightest rest after the 2.4 mile ~2000' climb. Descending was what I needed and it came next in spades. Descending a mountain on a bike gives me the focus to let all other thoughts gently fall away. Watching the trail and feeling connected to it, the machine, and the fragility of the balance and movement and action of the whole process gives me the ability to let the whole world melt away and have my entire consciousness be wide-eyed committed, without cognitive thought, without mindchatter, to a single...flow and....being and....
Down the connector. Down the $2000. Down to Sassafrass. Down to the Cairns. A tough climb out of that gap then Down to the overhang rock. Down to the meeting log. Down to the Crack Rock. Down to the Jeep. Into the Jeep the RedWalt went, stripped off the sweaty jersey, hit play on the iPizzle, and I was hauling ass Down 1206 headed to the airport. I was 15 minutes behind my time goal and rode the Jeep down that hill with the same resolve as the bike on Laurel. I ended up being about 10 minutes late (thank God I didn't have a flat or anything on the ride!) and we were back at the house at 12:30. I spent the next hourplus on and off helping Erinna and Zoe into the house and hanging with Floyd. He was laying in the exact position he had been when I left. Erinna said goodnight to him around 3AM. He was dead when I got up for work at 5:30.
Posted by Eric Wever / Pisgah Productions at 2:16 PM 2 comments: