Thanks for taking some photos Jonathon! Here’s a shot of me climbing a steep pitch on Cove Creek trail: 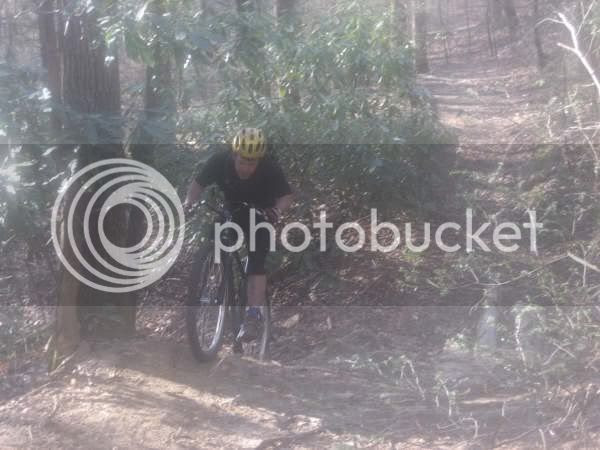 and Mike B descending a steep pitch, also on Cove Creek. 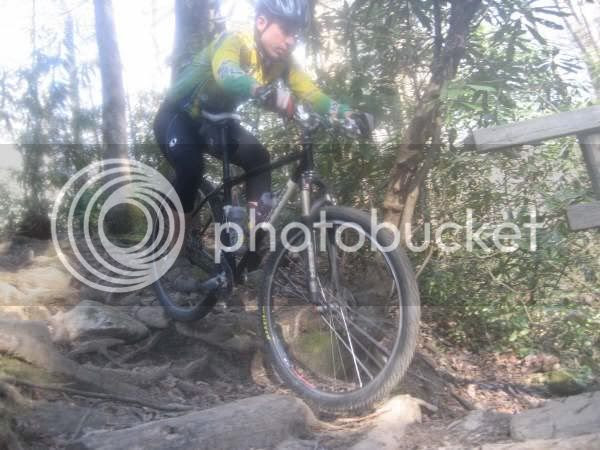 Then, a little later in the day, Erinna and I were married by Howard Hanger. My three neices were the flower girls. 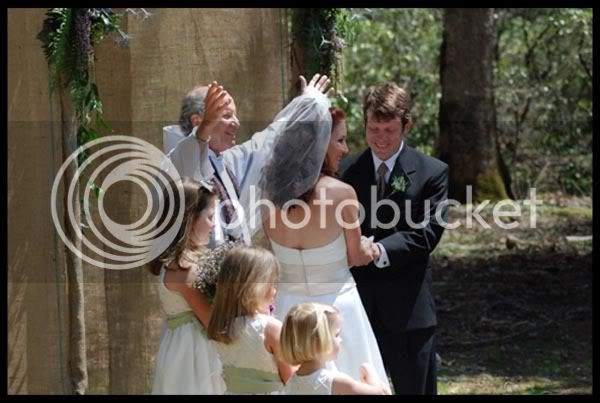 Nice easy paced solo ride today. It was cloudy and cool, a great day to be in the woods. The route: Spencer->Spencer->Neverendingroad->Middle Fork->ResRoad->Wash Creek->5000 back to the Jeep.

What do I take pictures of when I’m riding solo? Flowers and my bike. 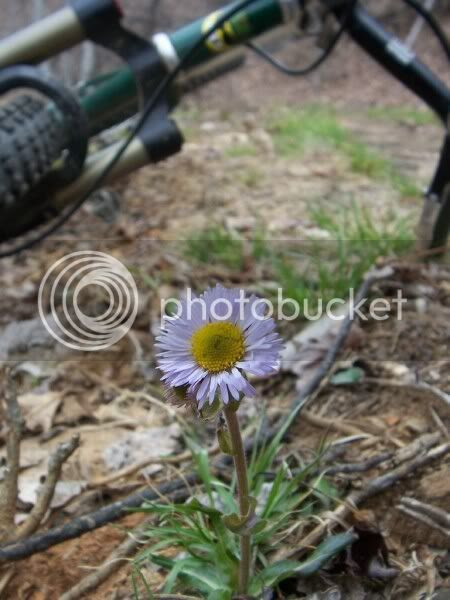 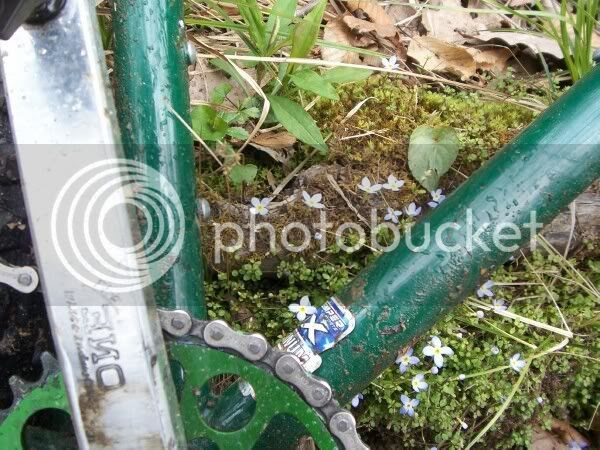 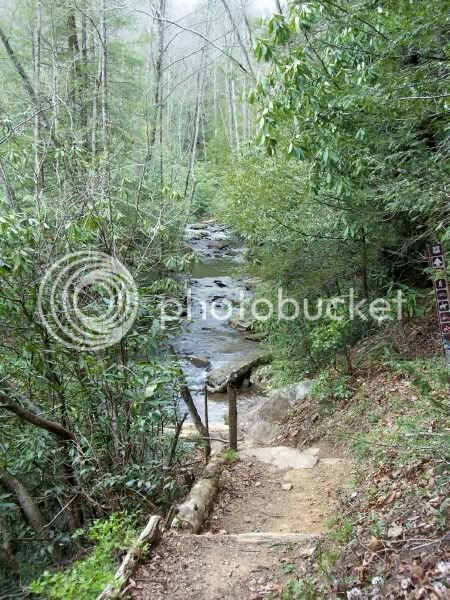 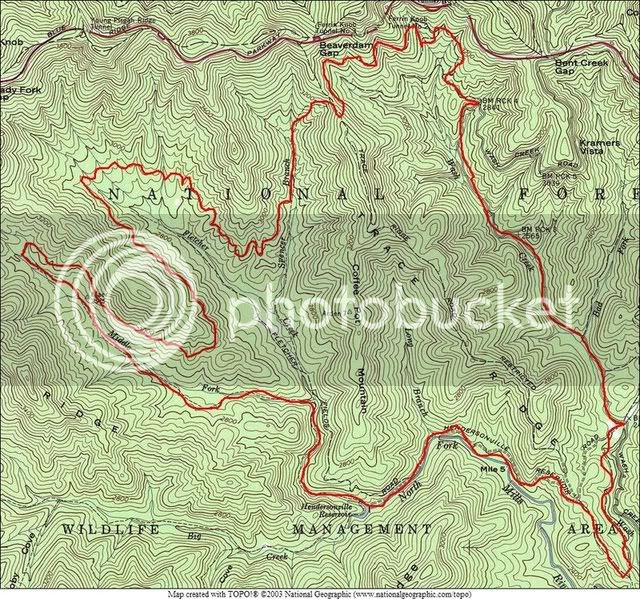 Wode, Mike B and I, along with Mighty Max the dog hit up a quick hour at Bent Creek this evening. We started at Rice Pennacle at nearly 7pm took the trails over to the neighborhood, back over to North Boundary, up to 5 points, down Ingles Field down down down…. and eventually back to the cars. Probably 8-10 miles and 1500 feet of climbing. That’s just a guess though…

The ride started at a quick pace up and over to the neighborhood. Mike pointed out the trail to MUM’s house and dropped me on the next climb. I had a tough warm-up but that was to be expected because I’ve been trying to shake a head-cold I’ve had for a week. Fun little descent then we were at North Boundary. I never choose that route for some reason or another so it had been a long time since I was there. North Boundary is a cool road/trail because you can see the ridge that you’re climbing to for a long time before you get there, a rarity for us. The pace had slowed to a fun social pace by the time we hit ingles field gap. Mike’s new dog Max was doing excellent. He sure does move faster than you’d expect upon first glance. His tiny little legs can really move! Anyway, we had an excellent descent after that. I followed Mike for the first half and he followed me for the second. I don’t know the trail very well so I was excited to rail as fast as I did. The trail was in perfect condition, my tires were hooking up, my rear brake was crapping out, and Wode said thet we took off and were out of sight all the way to the bottom. A turn here, a turn there, and we were back at the cars. Mike R, Jamie R, and Eric C had just finished a ride when we got there. Nice new ride Jamie! Fun after work ride.

No camera, No topo, sorry.

(Late Edit: WOOO! The electronic version of Eric’s Ride Log is over a year old now!)

Hey Everybody! This past weekend was the April Gathering as arranged by Brado. A ton of people were at Cove Creek Campground as I arrived on Saturday morning and before too long a ride plan had been formulated. 11 of us headed out for a pretty big day in the woods at a little past 10a.m. The route: Cove Creek Trail->225->NoNameSoonToBeLoggedRoad->475B->276->Pink Beds->GaugingStation Rd.->5018->Horse Cove->Squirrel Gap->BuckShoals->Buckhorn->Black->Buckwheat->Bennett->Coontree->276->475->Davidson River->Back to Cove Creek Campground.

When we got back to 475 Rich, Josh, and Mike went for another 5-7 mile extension and got in Cove Creek Trail the other direction but I was having none of that, I had been done since Buckhorn Gap.

The ride started out with 8 / 11ths of the group heading out of camp in the wrong direction. We realized the mistake before going too far, turned around, headed back to camp, and up Cove Creek trail. I am a S L O W warm-up guy so I got into the last place in line behing David G. We chatted the whole way up and by the time we got to 225 I had come to the realization that this ride was indeed the gathering ‘A’ group, slow speeds would be punished with zero break time. Dennis K***z knew about an awesome connector road that I had never been on and we took a left onto that next. climbclimbclimbdescenddescenddescendclimbclimbclimb then Mr K* himself had a pretty serious mechanical, his rear der. cable broke. To everyones surprise he had a spare cable in his backpack and with the aid of my ever trusty and helpful pliers we were rolling again. 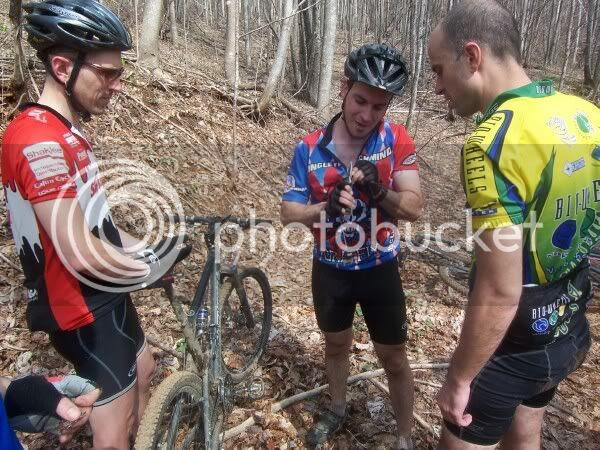 and a video taken at the same time of Rich and Josh… Please people, don’t give these guys ANY idle time together. Someone just might get hurt. Yes, that ‘SMACK’ sound was a piece of Rich’s stick hitting me in the head:

Next was a little gravel and pavement over to the the Pink Beds trail. The Pink Beds was a lot of fun, I hadn’t been back in there in years. I don’t believe I had ever gone in that direction so it felt like brand new trail for me.

Here’s Jonathon near one of the beaver dams in the Pink Beds: 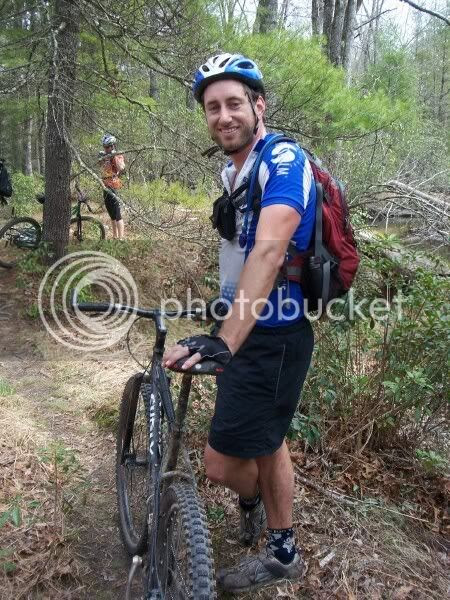 The Pink Beds trail ends at Gauging Station Rd. The original plan was to take a right and head back towards Buckhorn but again Mr K* had different plans for us. We took a left then a right onto FS5018, the never-ending-road-of-grassy-death. Despite that description I had a great time during that climb. I had both one of the high points and the lowest points of my ride there. I had to stop and try to get my heartrate down to an acceptable level and also felt like I was haulin’-ass up the hill. Strange combo, for sure. We made it to the top in reasonable time and took a nice long break before heading in to Horse Cove.

I led out for the downhill to Squirrel and I had a great little decent. Mike was right behind me and we were movin’ down the hill. We regrouped at Squirrel and took another long break there since there were both flat tires and a bad crash behind us. Jonathon went down hard at the rock at the end of the horse-club trail work and had to take a moment to get his head back on straight.

Here’s a shot of Rich coming into Squirrel from Horse: 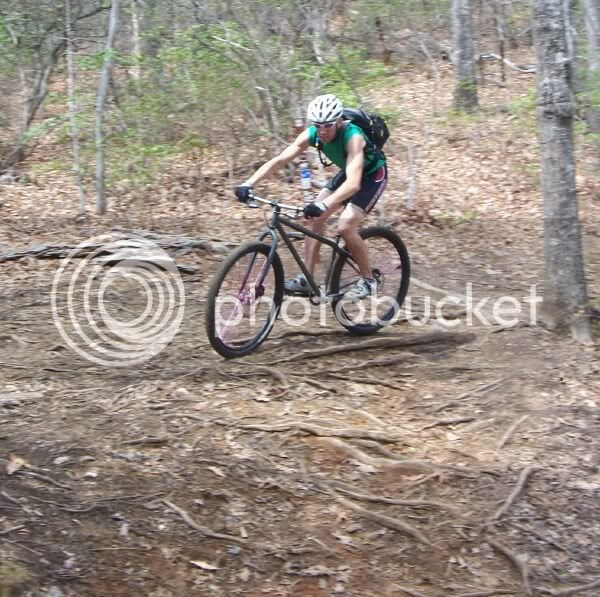 Next was Squirrel down to South Mills River. Everyone kept a very tough pace up all the way to the end. My legs were starting to feel fatigued at this point so I needed to walk some of the uphill sections but otherwise I had a great run to the end of Squirrel. I did, however, over-extend my elbow during the downhill to the Ford so it was nice to see that another looooong break was in order at the river. The group was getting pretty spread-apart by this point so I was able to eat, drink, and take in the sights while waiting for everyone to arrive….

Here’s Zach chillllllin, waiting for others to arrive, filter water, do whatever people do during long breaks while mountain-biking: 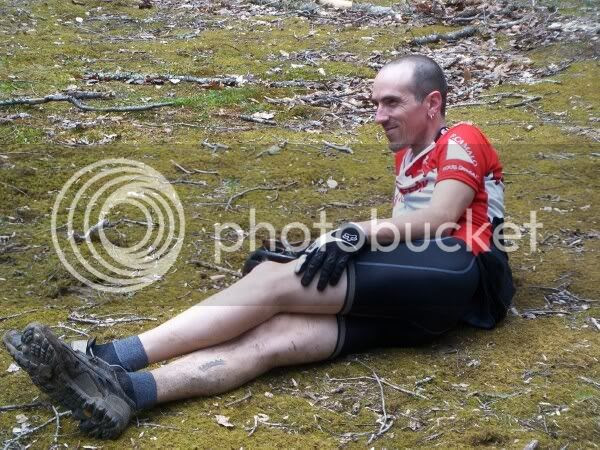 Oh, Here’s a shot of the huge water-filtering project that was going on at the same time: 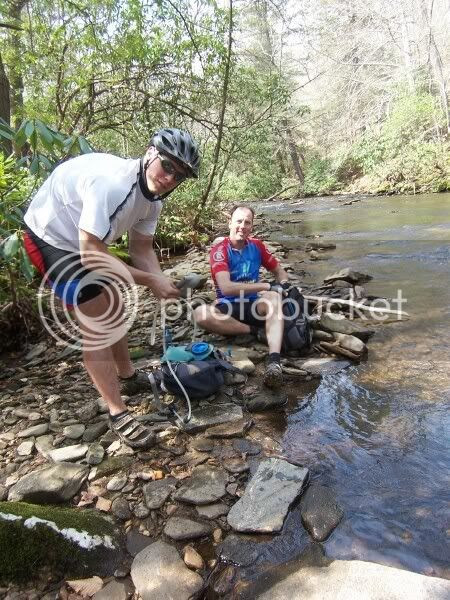 My legs were really not feeling good at all after some time waiting so I decided to putz on up BuckShoals/Buckhorn, knowing that I would be passed by everyone with fresher legs than mine sooner rather than later. Rich was the first to catch me and with a motorcycle-like noise he passed me so fast that I was left with my jaw dangling. I might as well have been not moving at all. We regouped at every turn but I left before the group after every stop past that. My legs were really not doing great and I even mentioned the ‘B’ word to Mike as we climbed up to Buckhorn Gap. Mike kept up a solid, yet friendly pace all the way to the gap which I was thankful for. If he hadn’t been pulling me along I bet my morale would have dropped pretty low. I even thought about bailing at the top of Clawhammer and mentioned that I was ‘done’ but had enough in me to head back into the singletrack when the time came to make that decision. Again I left before the whole group arrived knowing that I’d be caught pretty soon. Pretty soon this time was during the climb to our highest point of the day, past the notch-log and before Club Gap. Here’s Zach and Jody enjoying the day at that peak: 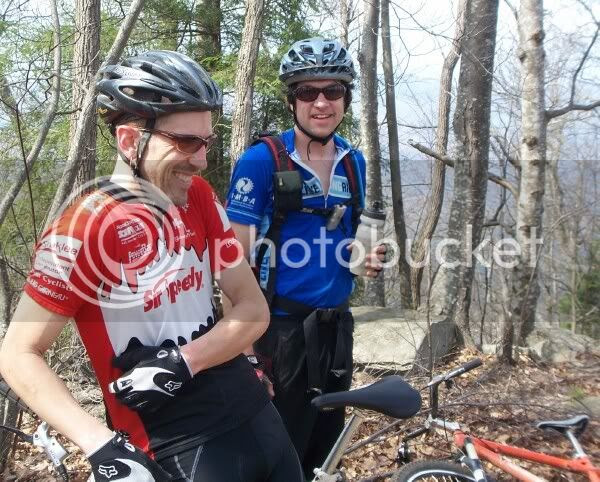 Next was Buckwheat/Bennett, the best downhillin’ in all the land. Seriously, there are some GREAT downhills in Pisgah, every one of them as different as all the others, but Buckwheat/Bennett is fast, tech, and scary plus it has the added benefit of incredible views and some of the biggest moves in the entire forest. DK*, Mike B, Jody, Rich and I were at the head of the pack and everyone made some very impressive moves. I chickened out of the Q-bert S-turn and gave the Clint Huck thread the needle line my best shot, but didn’t make it. Oh, I railed over the rootball of instant death on Buckwheat though… and Josh had a bell-ringer of a crash, too. Anyway, I led out for the rest of the descent to Coontree and felt as fast as ever. After the regroup at Coontree Mike went first and boy-howdy I sure am glad he did. Mike was on fire and went for every nasty downhill trick he could find. Roots? Smash through them. Blind drop-aways? Go for it. The perfect 8′ here to there gap? The absolute highlight of the ride. I was about 25′ back and saw him hit the first root and sail soooo smoothly in a perfect arc up and over god-knows-what to a smooth, rootless, rockless, downhill transition… It was art. It was beautiful. It was Rad. I followed his line, and with complete confidence lifted the bike, had that feeling of high-speed weightlessness, and when every image and color is crystal clear… freeze that moment in time… that, that right there is why I ride a mountain-bike.

When we arrived back at camp Erinna had just arrived, too. She rode from our home in West Asheville out to Cove Creek and had been there at camp for less than 5 minutes. We had our dogs Sophie and Floyd with us and from the looks of it, a serious party was getting ready to unfold… in the end I hit the hay pretty early but enjoyed the festivities for a while before heading off to sleep off the day.

Here’s a quick video from when Jonathon was challenged to burn ALL the wood before the end of the night: 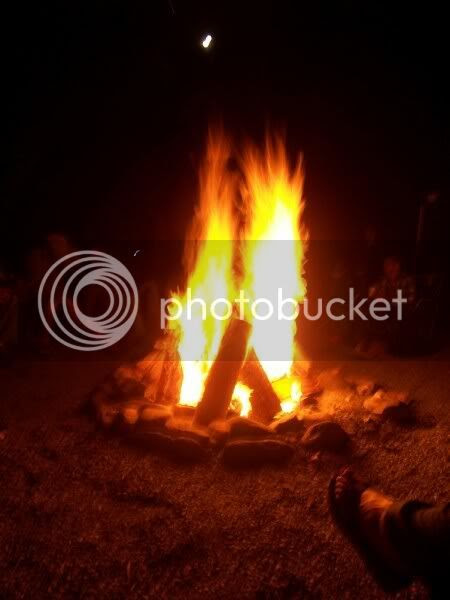 Thanks for coming out everyone!