The Tuesday Night Dinner Club is a special thing.

The Tuesday Night Dinner Club is a special thing. Even before the ride started Clint said something to the effect of, 'This ride is going to be awesome. I can tell'. He was correct. 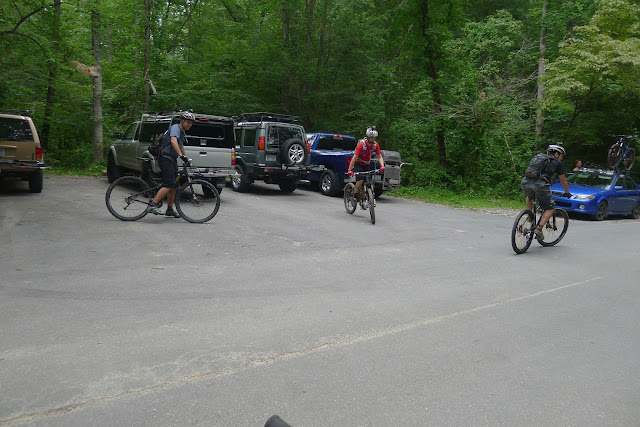 notice the hitch mounted grill.
Mike B and I arrived right on time (meaning 15 min. late) and were not close to the last ones there. The cast of characters for this evening: Clint S., Mike R., Than W., Jody F., Chad M., Trent B., Mike B., and myself.
Plans were made then quickly changed. I made a suggestion, repeated it, repeated it again, and then we were headed UP Trace. 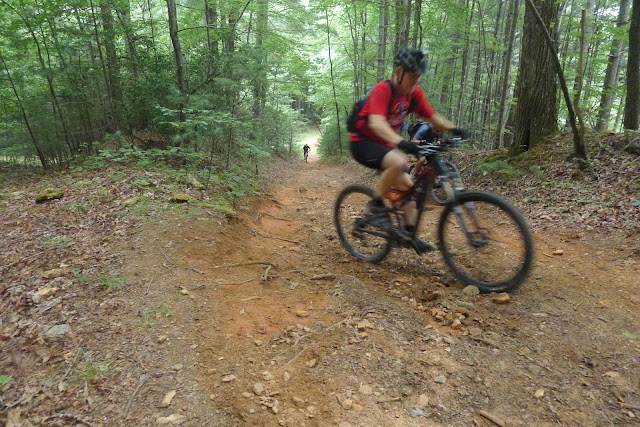 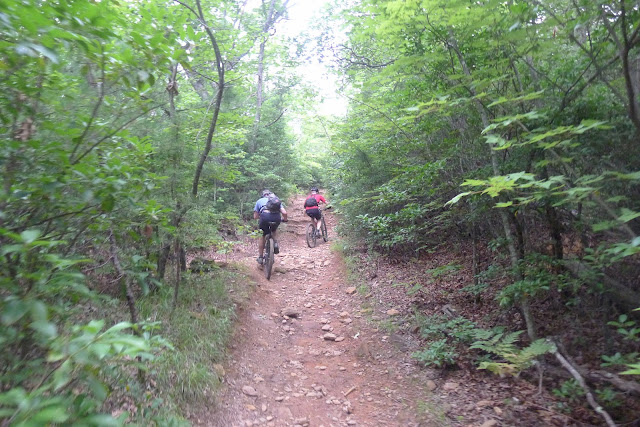 Mike B., Chad, Clint, and I were out front. By the top it was just Chad and I. That became a theme of the evening as I was feeling ON the bike and climbing like mad.
Than led out the Spencer descent but Jody and I overtook him at the first flattish spot in the descent. What came next was otherworldly. I could see the lines and my bike took every one of them. Every thread the needle, rootball, rutted out drop seemed like nothing at all. Jody and I stopped twice to consider holding up for the others, decided against it, and I still got my second best time on the descent (according to Strava).
Next was the never ending road to Fletcher. 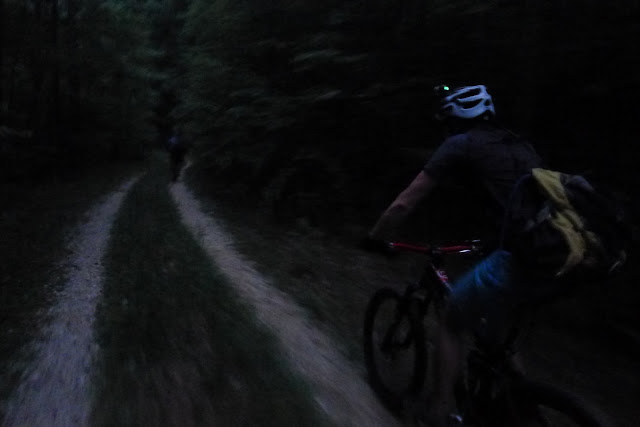 Mike B was up front for that one. The best part of that descent for me was having the trail be totally enveloped by overgrowth and as Mike B put it, using muscle memory to navigate, and not much else.
After the regroup at Middle Fork I was feeling on fire and took the lead for the climb with Chad (on a SS) next in line. I levitated up the trail. It felt like I was floating. 100% pedaling with 0% perceived effort. I could hear Chad behind me and I kept clicking down the cassette and couldn't drop him. Of course with a pace like that we were easily a few minutes ahead of the group at the top. 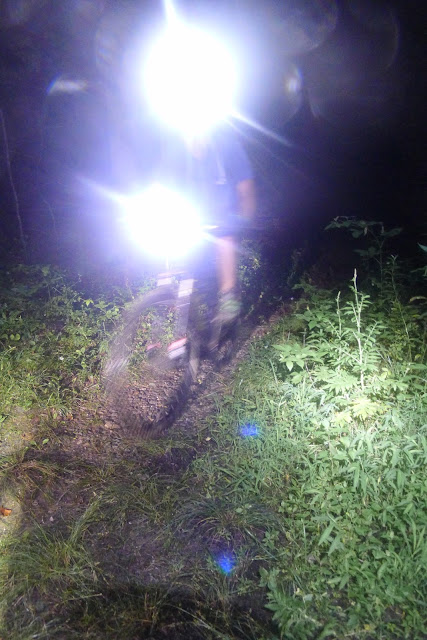 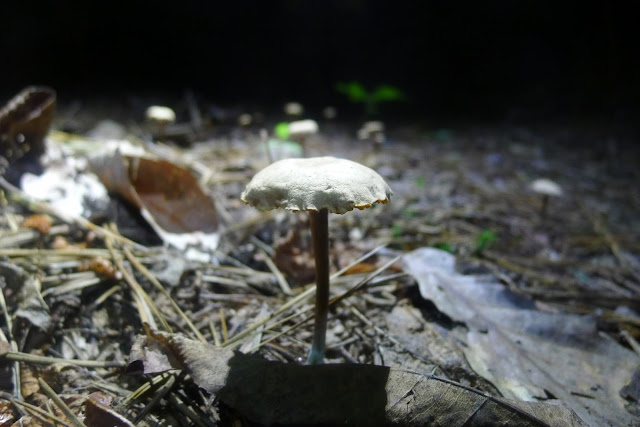 Chad took the lead for the next steep section and I tried my hardest to keep him but I couldn't do it. He pulled away slowly and steadily.
Mike B and I were out front for the descent to the creek and again, I was ON the bike. Super flowy, Super fast, Super fun. I even considered the gap for .0001 second because its. just. so. perfectly. placed... but no, not this night.
I floated down the lower tech section, didn't even notice the turn, and was at the creek with Mike B on my tail the entire way. 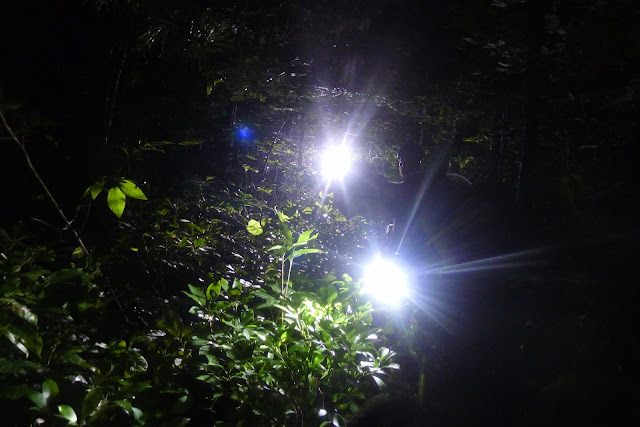 After a regroup the pace remained high along the creek and emboldened by the floating feelings tried to gap a 6' corduroy with great failure. I lipped off the first log and my front wheel squarely hit the last. In an instant I was over the bars and flying through the air. I hit the ground rolling and was unscathed. It was possibly the loudest crash I've had though as the suspension bottomed out, rebounded and tossed me. I immediately noticed a salamander where I landed and took it's picture. 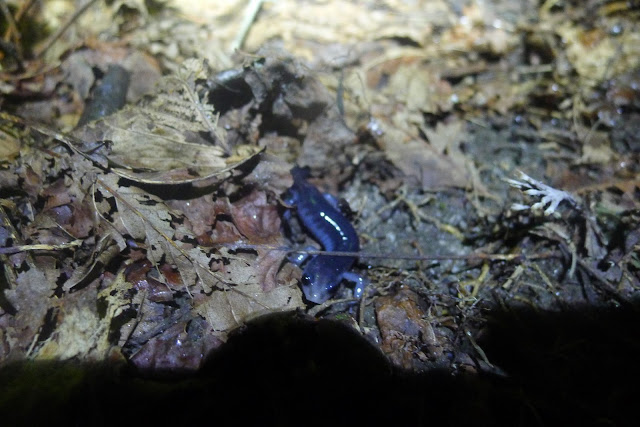 Then Clint broke, then fixed his chain... 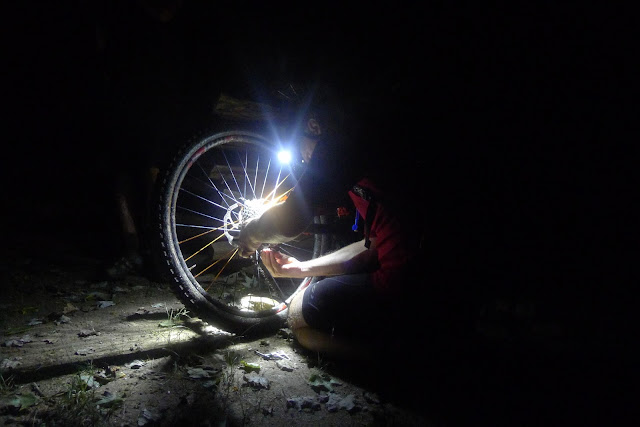 Up the gravel was fast and uneventful until Clint took off like he was racing. Jody responded then I followed. Jody fell off the sprint and I stuck to Clint's wheel. He stood and sprinted a second time and I realized he WAS racing so... I held his wheel... then took it. I was actually big ringing up Reservoir Rd and burning the last matches I had. I got to the lot first and heard Jody say to Clint 'Well YOU started it!'.
The final trail of the night was New Lower Trace. There has been no more work done since the first time I was there so the end was as much about bushwacking as it was mountain biking.
A quick dip in the river 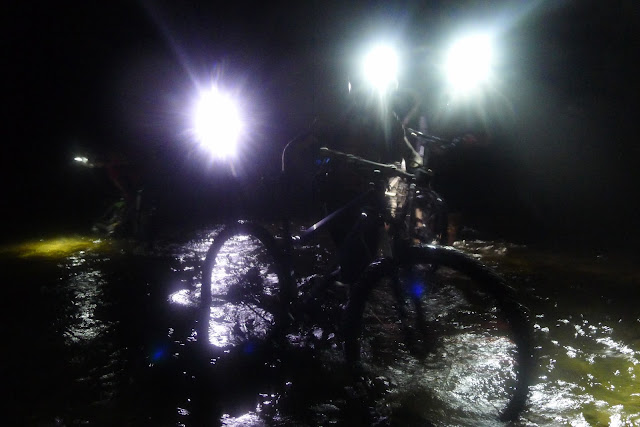 and 100 yards later we were at the vehicles and the Dinner part of the Tuesday Night Dinner Club commenced. For the first time that I know of there was a theme: Mexican night. Clint (on the spot) made the second best guacamole I've ever tasted (Erinna still holds 1st place, Clint), 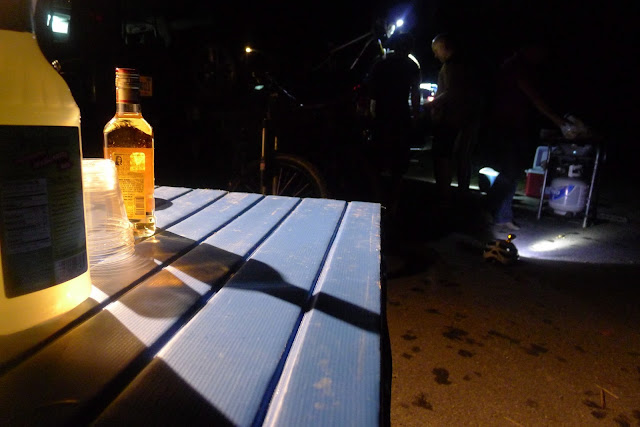 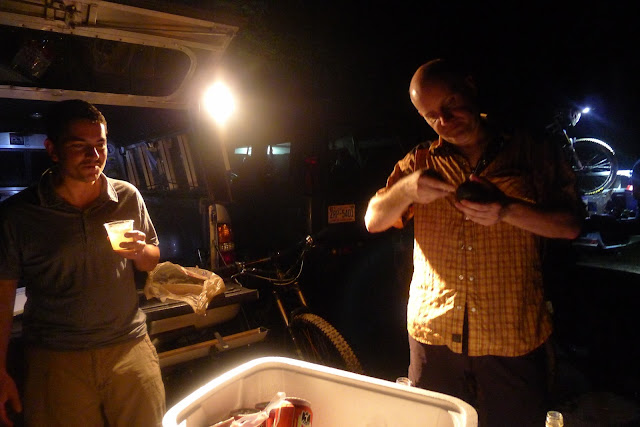 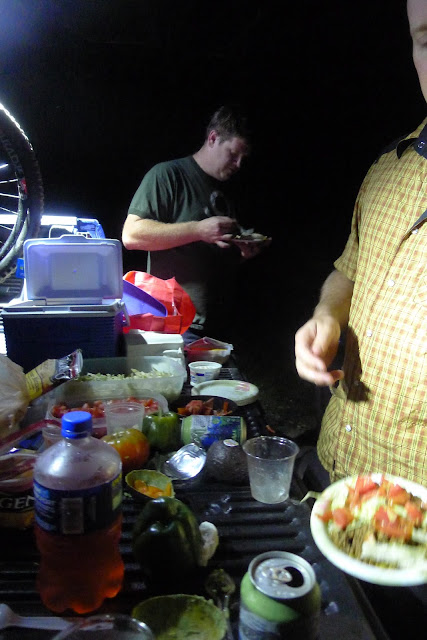 Than had the beef browning, Mike R set up the margarita bar, and a whole spread of toppings were ready in moments. TACOS AT MIDNIGHT!!!!
Yeah,  The Tuesday Night Dinner Club is a special thing.
Posted by Eric Wever at 2:47 PM No comments: