Now listen. I'm going to do this stupid thing... then you repeat after me. Ready? Watch this. 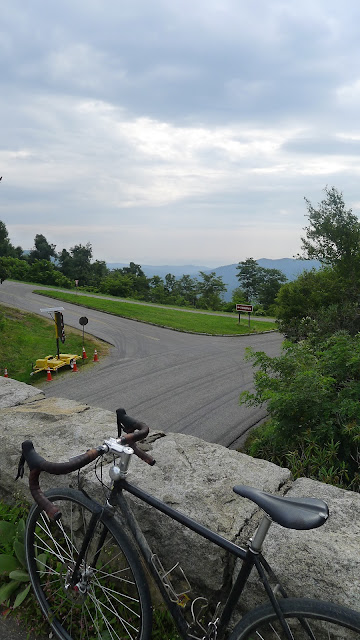 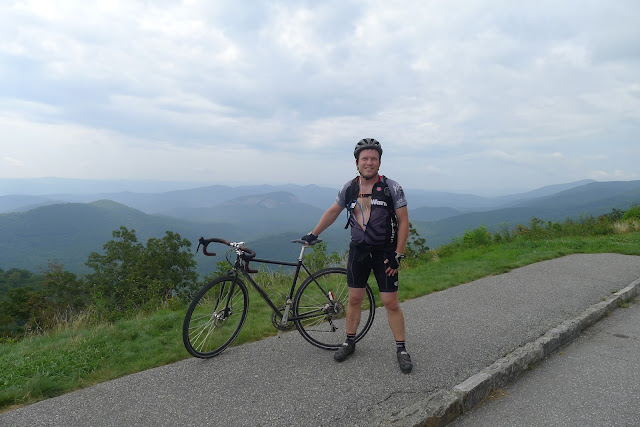 Yesterday morning I posted on FB 'Who wants to join me for half or all of the Pisgah Monster Cross course starting at 9AM?' and I got a few replies, all of them of the 'I wish I could' ilk. I then dropped Z-Love off at childcare and hauled out to the forest. I was on the bike at 8:45 at the PMBAR start/finish and I wasn't completely convinced that I was up for the Monster. 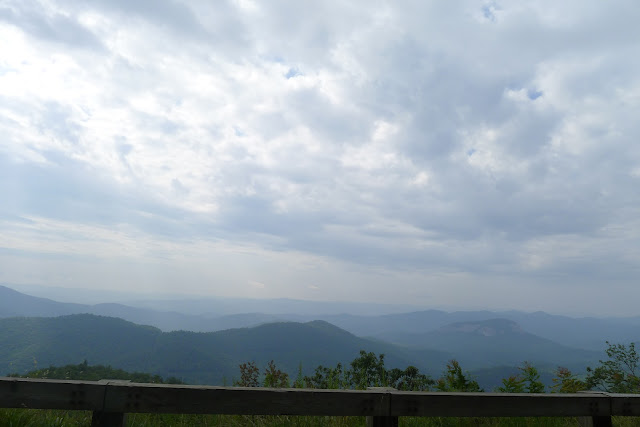 Clawhammer ->South Mills ->1206? 477->475b->475->5003->who knows? There were choices to be made and I had time to make them. I decided on 477 to start. I was spacing out and getting warmed up when I ran into Art O. and we talked about sponsorship stuff. Wake up Eric, what's the plan? When I got to 276 I decided to do the second half of the course so I stopped at the pink beds for a water refill, a gel, a much needed breather, and to chug the one beer I had brought along. No need in carrying that all the way to the parkway, I thought. I had more than enough calories along for the ride, it was best to leave the weight down below. Next was 276 to the parkway. 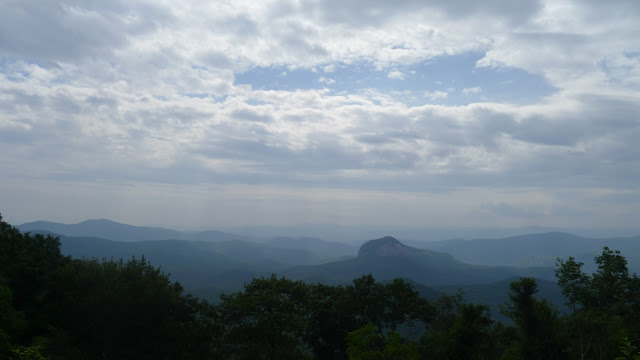 I had a spirited ride to the parkway, to say it mildly. I passed Uber-Fred from the planet Tri-dork who was just finishing a flat change along the way and thought it would be a good idea to not let him catch me. I was on the parkway and headed towards Graveyard Fields in no time at all. Oh, it was an absolutely marvelous day to be on the bike. Temps in the high 60's- low 70's, high humidity, and cloudy skies. 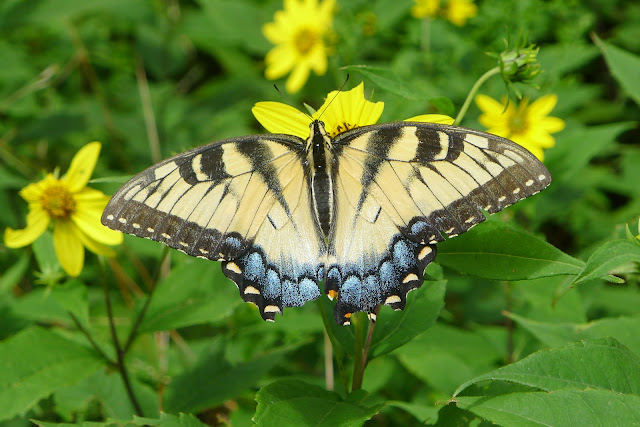 The climb up the parkway was casual yet deliberate. Except to stop and take a few photos along the way I kept a good pace and by the time I could see the road to Balsam in the distance I was ready to climb it. 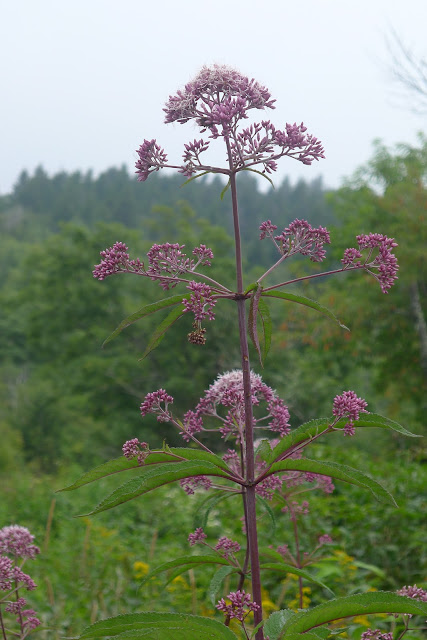 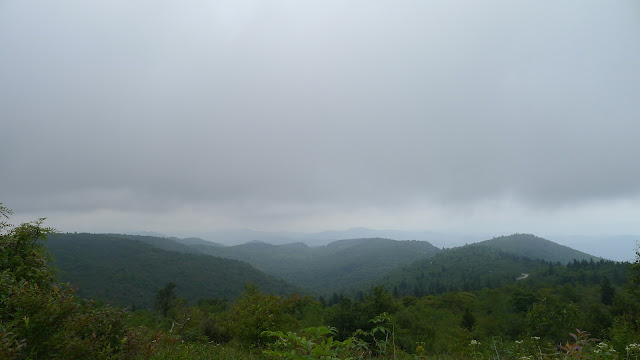 Sometime before the climb I had checked my camelbak heft and realized I was getting low on water. Was there a faucet at the Balsam parking lot? I couldn't remember. I knew there was a creek on Flat Laurel though and it runs at just below 6000' elevation. I'd refill there if necessary. At the crest before the descent to the parking lot (my highest elevation of the day) these guys were having a quick bite to eat before continuing trail maintenance. 'Gentlemen, do any of you have some extra water?' 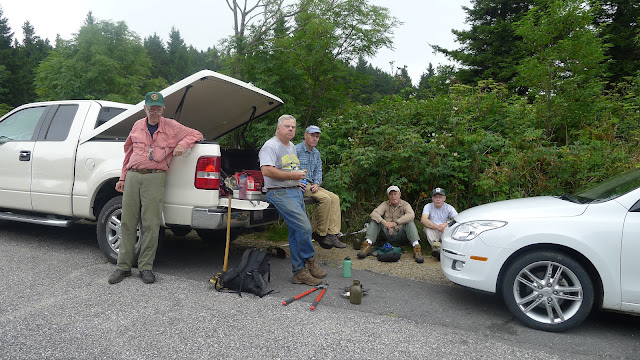 They kindly refilled my water supply and the guy in the grey shirt was amazed at my route choice (I had figured out a plan at this point) and warned of the imminent rain. The guy with the glasses and I locked eyes and shook heads 'Nope. Not going to happen.' 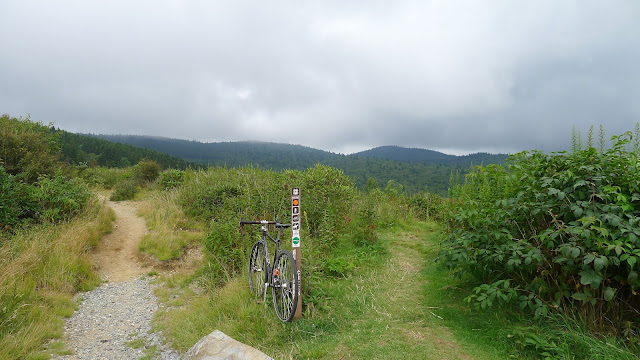 Flat Laurel Creek was next and I was feeling hungry from the start. Good thing I had that almond butter/nutella/raspberry jam sammy in the pack. The plan was to stop and eat at 215. 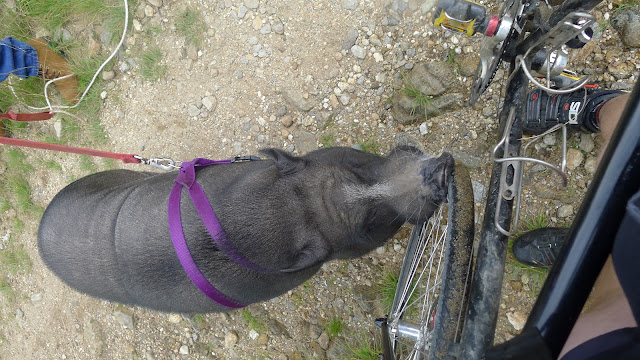 Then I ran into these guys. I could hardly contain my laughter and enthusiasm. Only in Pisgah I thought. A hippy, a pig on a leash, and a three legged pit-bull out for a walk. Thanks Mike, for letting me take y'alls picture! 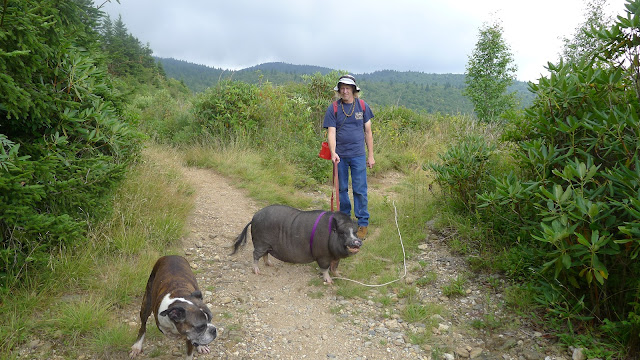 Then I pushed the All-Road bike to the limit, hauling ass on Flat Laurel. I thought about what I had told Walt I was going to do with this bike when we were in the discussion stages of the custom build. I don't believe I let him in on that one detail... that the bike would most probably see singletrack pretty often. 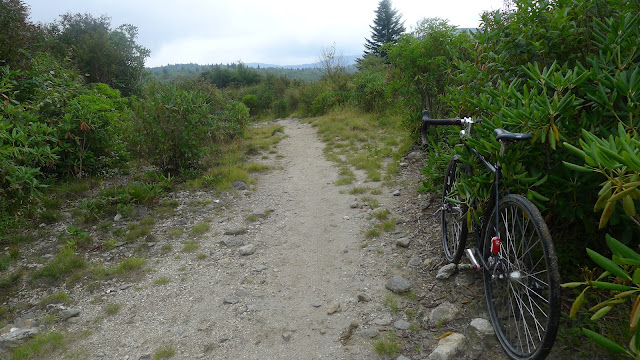 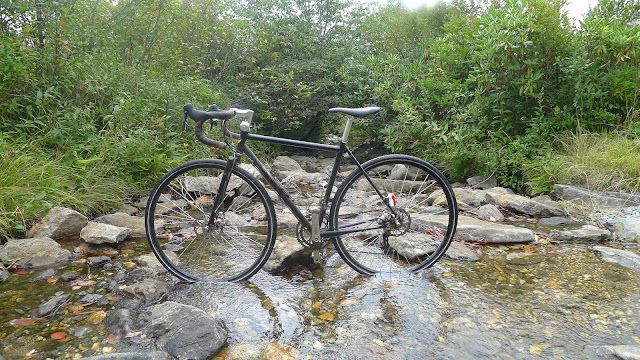 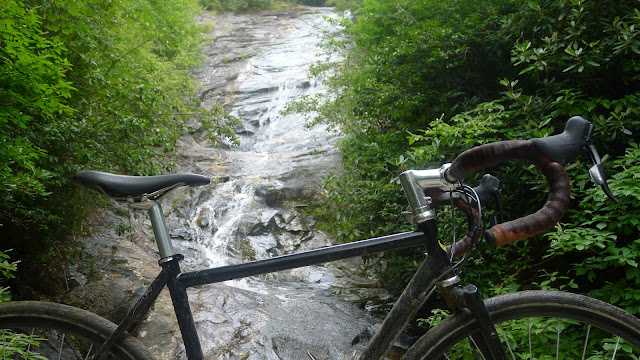 When I reached 215 I was ready to eat. I stopped and pulled off my pack and.... holy fuck.... it was wide open.... and the rest of my food was long gone. I dumped everything out on the side of 215 and thank the lord there were a few calories festering in the bottom of my pack. When had I opened this piece of beef jerky? It must have been weeks ago. Oh well.... I was ready to drink creek water a couple of miles ago... the jerkey wasn't sooooooo green looking so..... down the hatch and down 215! It was too late though. Knowing that was the last bit of food along and just being plain ole hungry was starting to get the best of me. It was just about all I could think of. The next place to refuel was the Fish Hatchery... I still managed to get up to 47mph heading down 215 even though I was soft peddling. 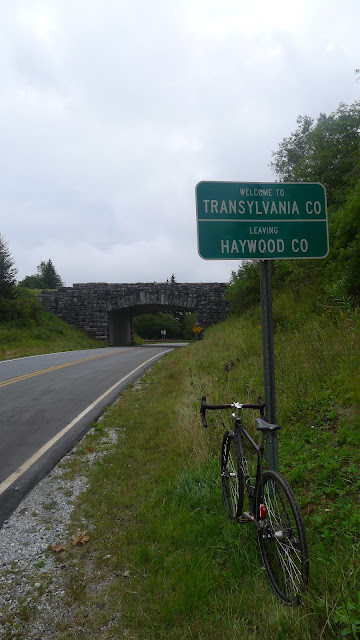 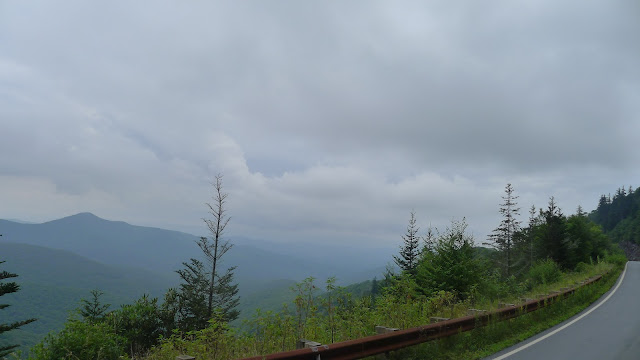 Then I made a mistake. The piece of jerky had comforted my needs for the minute and I decided to take 140-140A-5003. Did I mention that was a mistake? I could hardly keep it together. I was in full-tilt bonk except I was not cramping. Hungry. Thirsty and trying to conserve. Seeing stars. not thinking clearly. and I was here: on a 'road' bike. 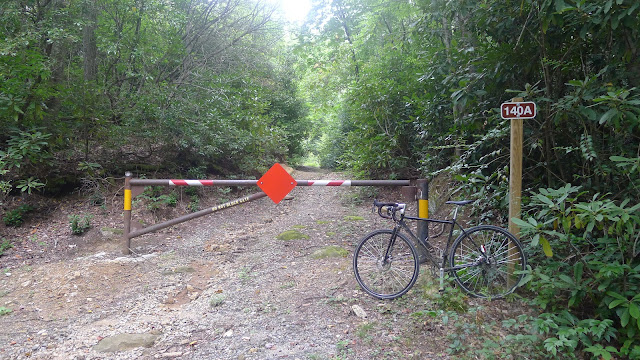 I figured it was still a good idea to take 140->140A->5003 (it wasn't) and I walked almost every bit of climbing along the way. I stopped and tore through my camelbak again. I licked the two emergen-c wrappers in my camelbak clean. Then I descended to Gloucester Gap. It was hardly fun even though I was again on overgrown, briary, nettely, singletrack. I've never been so happy to see Gloucester Gap. I was holding my bars far too tight for the descent to the Fish Hatchery and my hands had gone numb by the time I got there. I had no cash so the soda machines were inaccessible and the store was closed for inventory so I couldn't barter away my bike for a snickers bar either. I was out of there in moments and that rain the guy in the grey shirt was talking about? It hit HARD. I thought about putting my camera in a safer place but then forgot about it. Head down and peddling hard I was back at the Jeep about 10 minutes later. Then 4 minutes after that I was at taco bell.
Posted by Eric Wever at 6:03 PM 1 comment: