The shortest ride ever!

Erinna, Sophiedog, and I had to bail on a ride yesterday. We started at Turkey Pen parking lot at 9am and were headed down the singletrack just a few minutes after arriving. We were out for a shakedown ride for Erinna. Her tiny pink WaltWorks bike received a refresh after 6 years of faithful service. A new fork, new wheels, and new drivetrain bits needed to be seated in. On the way down the hill I noticed two things: 1. the trail has been recently worked on and the numerous grade reversals have been sculpted into perfect jumps. 2. my rear tire felt soft. We stopped and I pumped up the tire and asked if everything felt good for Erinna then we continued to the bottom of the hill. I got off to the side to take a few photos as Erinna arrived and must have stepped right on a yellow jacket nest. As soon as I snapped the photo: 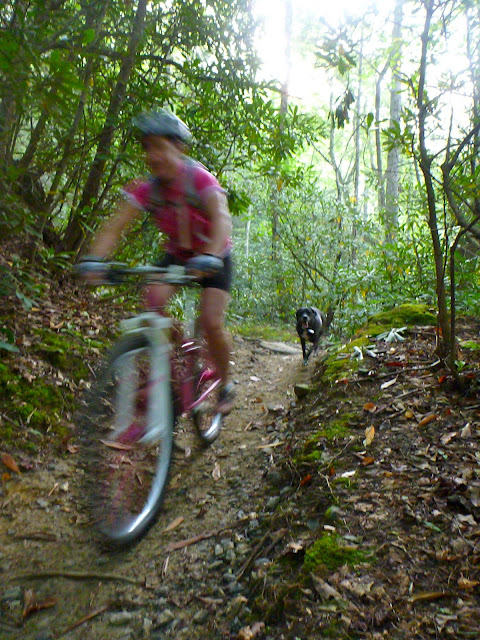 I felt the first sting, then the next. I started yelling RUNRUNRUNRUN!!!! and we hauled ass. I dropped my bike at the horse ford and ran across the river. That took care of the rest that were attached to me. We stopped, got the remaining few out of my backpack, took a breather, and were ready to get going again when I noticed something odd: Somewhere along the 1.5 miles I had DOUBLE flatted. crap. 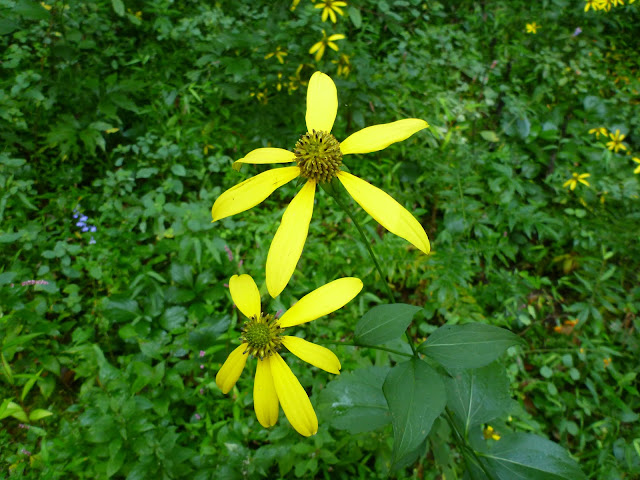 We then realized that If I used the two tubes we had with us we would be spare-tube-less for a ride in Turkey Pen. That and Erinna's spare was actually a road tube. Uugh. The decision was made to just walk back up to the Jeep. The three of us had a pleasant walk back up the hill then cracked open the after ride beers. That was good enough, it had been a stressful week, it was time to chill out, let grandmona take care of Zoe for a few more hours, and have a nice relaxing morning at home. I love my wife!
Posted by Eric Wever at 7:18 AM No comments: