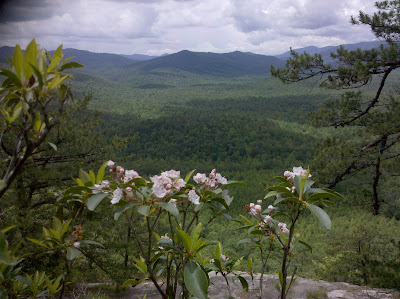 Sophiedog the Brave and I just walked in from a day playing in the woods with Mike B., Maximum Overdrive, Scott from Indy and his two pals Paul and the red lantern finisher from PMBAR '10 whose name is eluding me right now. After an excruciatingly painful departure Mike, the dogs, and I arrived at Yellow Gap surprisingly only five minutes after the Indy crew. Mike and I were ready in moments and the plan for the day was established: Mike and I were headed for Outer->Inner while the rest were doing a longer variation of the same ride. Mike and I decided that the longer route had too much gravel for the dogs. 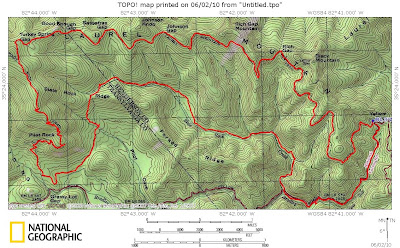 Oh, I'd never seen this before: as we started there was a 4x4 up in the camp off the road at Laurel Mountain. We told the guys ' you better get that truck out of there before the Ranger comes through, the ticket is like, $150.' The driver said 'No, it's $225'. The Ranger had just been there.
We started up Laurel just like 100+ rides in my past have. The usual climb was as beautiful, challenging, and as fun as every time before. You can bury me on Laurel Mountain trail when the time comes. There are trails like Laurel, but no trails better than Laurel. 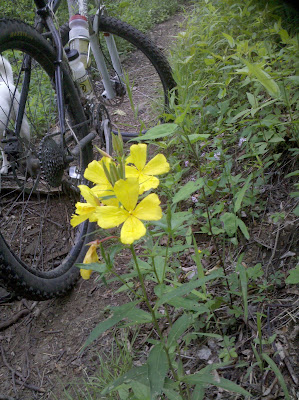 The climb went like this: Scott out front, Mike and I trading places, Red Lantern next, Paul a bit off the back. When I noticed this order Scott was quick to say 'Paul might not be the fastest, but he's a diesel.' Fair enough. We climbed through all the familiar gaps with all the unfamiliar damage left over from this past winter, we all got into a great climbing groove, I cleaned more of the $2000 than in years, and we were at the descent in just over three hours. Oh yeah, it must be Grouse season on Laurel right now. We heard the deep subwoofer-like thumpthumpthump the male grouse make, a female take flight diverting our attention from a nest, and three tiny grouse babies shoot out of a nest in fear for their lives. We weren't there to hurt them of course, we were in awe of what we saw.
As we took another breather at Pilot I reinstalled my helmet camera and Mike asked who should go first. I told him he should go first and to go fast 'cause the camera needed a subject to shoot.

The first run concluded with Mike hitting the ground hard while negotiating one of the quad-switchbacks. We regrouped at the first overlook, took yet another breather there, then continued to rail down Pilot Rock. Max taught Sophie how to cut switchbacks along the way. That was fun as Max had been popping out of the woods in front of me all day and when Sophie started to do it too she seemed a bit confused. She'd hit the trail and look at me like 'wait, I don't want to be ahead of you!' Anyway, Mike and I were really flying down the hill and Mike had a spectacular high-speed crash right in front of me. He tried to gap a big here-to-there but as soon as his front wheel landed the whole bike seemed to fold in half. Mike has spit off the bike and did a 360 through the air before landing. He hopped up in an instant and was fine. His bike, on the otherhand, was not. We quickly realized that his rear derailleur had taken the brunt of the blow and was refusing to work any longer. 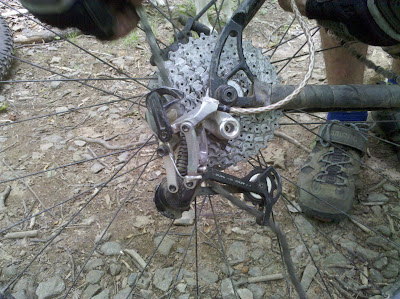 After some bending of steel and aluminum Mike was able to get the bike running again as a three speed (down from 27) and we continued the ride by taking noname to Slate. We said goodbye there to the Indy folks as they went down to 1206 and we went up towards the rock intersection. I had told everybody that I could hear my baby crying and it was time for me to get home so Mike and I pushed a little harder once we were on our own and we were back at 1206 right as the Indy crew was starting the second portion of their ride. We made ride plans for tomorrow then Mike and I headed up the gravel (after a quick water break at Bradley Creek) as fast as the dogs could handle. We were back at the car in just over 5 hours. Not the fastest day on the bike but that's not what always matters. What always matters is having accomplished one thing and one thing only : Having fun playing in the woods using the bicycle as both the literal and figurative vehicle for having that fun.
Posted by Eric Wever / Pisgah Productions at 4:13 PM 2 comments: