Rain, a Black Bear, MUNIs, and a Dead Deer

After going out with a rowdy crew for a night on the town to celebrate Ian L.'s impending wedding I woke up this morning with a funny taste in my mouth (juniper?) and loaded up for a ride with Dicky and Bill Nye. We originally were headed to Yellow Gap but the call was made to stay out of the clouds and hit up a couple of hours at Bent Creek. The route: from the new parking lot->gravel->Ingles Field conn.->Ingles Field->Tony Michaels->GreenSlick->Sidehill->Little Hickory->Ingles Field->???->Hardtimes conn.->Homestead->Deerfield. I took a wrong turn and we ended up at the campground so I decided then and there that I was done for the day. 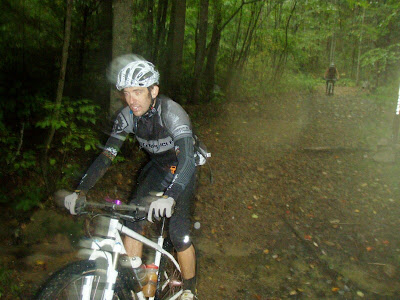 It's been raining in Asheville almost non-stop for two weeks now. Last week the French Broad River broke it's banks. Well, the rain had let off for two days, then was on all afternoon/night Friday, let off for about 10 hours, and resumed moments after we arrived at Bent Creek. 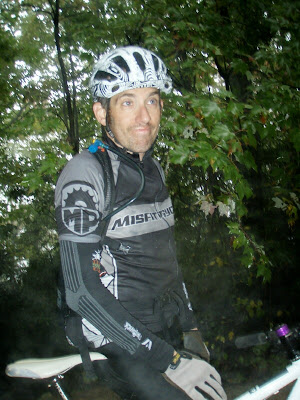 The order of the day went like this: Dicky and Bill Nye would take off on the climbs and after a few minutes I'd catch back onto Bill Nye's wheel. We'd arrive at the top where Dicky was waiting and I'd take the lead for the descent then would wait for Dicky, then Bill Nye to arrive at the bottom 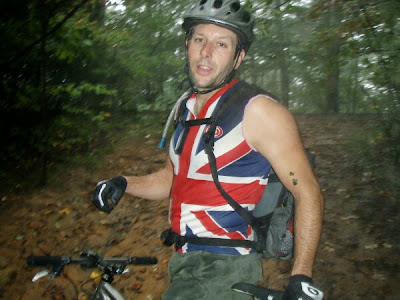 There were a few interesting sights today, as indicated by the title of this post. First I saw my first bear in a number of years. It was awesome. As I rounded a corner I saw what I first thought was a big black poodle take off down the trail. I quickly realized I was following an adolescent black bear and I maintained a 50' buffer and followed it for a good 5 count before it ambled off the side of the trail. 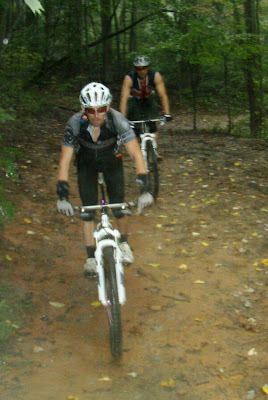 There were also 20+ unicyclists scattered all over Bent Creek and a dead deer on the trail that I'll talk more about later.
Posted by Eric Wever / Pisgah Productions at 4:51 PM No comments: