and now for something completely different:

Last night I got out for an intense evening/night road ride. 44 miles, 4300' climbing, 3:20 on the bike. I know that might not sound fast but I'll tell you but I felt like I was hauling ass. It was my first road ride since Alex @ ProBikes brazed a new dropout into the fork so.... it had been over a year since I've been on the road? My route: From West Asheville->Riverside->Monticello->Hamburg Mountain->Reems Creek->Ox Creek->BRP->Biltmore Forest->Meadow->Amboy->State. I was on the bike at 6PM on the dot with lights front and rear, no camelbak, and no real plan. The ultimate route ended up being one of my favorite rides, one I had even done when I lived in Charlotte, but backwards. Long Plunge backwards at night? Sounds like a great idea to me. 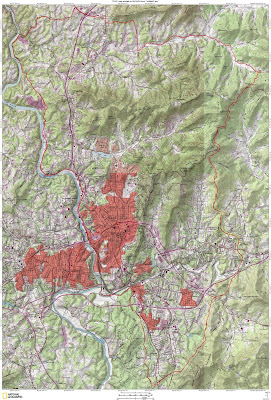 The first 22 miles took me two hours, the second took one hour twenty. The sunset was spectacular with unbelievably vivid orange and pink clouds exploding in the sky. Once I was on the parkway for the descent into Asheville the skies opened up and a heavy rain and darkness accompanied the entire second half of the ride. I stopped twice: In Weaverville for a snickers and water refill and at the entrance to BF for a gel. Oh, and there was another rider out there that I passed on the climb but then he held my wheel down the parkway descent. Great descending out-after-dark-in-the-rain-rider-dude. 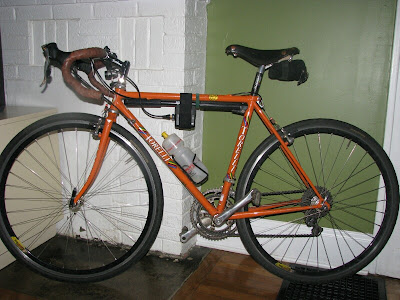 Posted by Eric Wever / Pisgah Productions at 8:21 AM No comments: