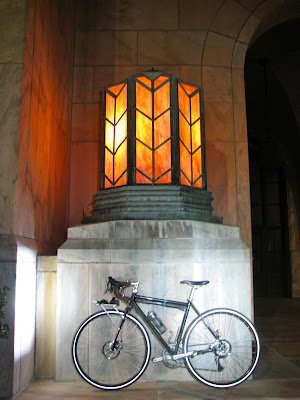 The ride started in temps in the low 50's and with a slow pace. It had been nearly a week since I had done anything to get my heartrate up so a warm-up pace was definitely necessary. Once I had taken a few photos at the plaza, however, I was ready to turn the pedals over. Up Macon to Sunset was next, a route I'm not very familiar with, and I was surprised at how quickly the road felt like a rural lane and how quickly I was gaining elevation. The city lights below were gorgeous. The closest to West Asheville gravel (that I know about) was next, Patton Mountain, and with music blasting in one ear I was thrilled when I looked up and was already at the water tower at the top. 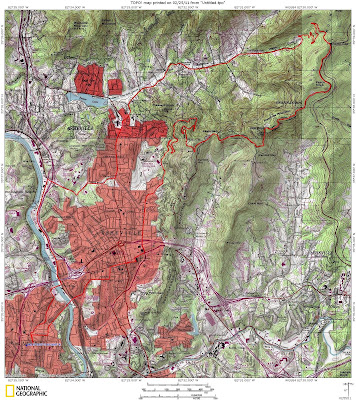 I had both Amoeba lights blazing and started to hammer up the second half of Town Mountain to Bull Gap and Webb Cove Road. I took a quick breather at the top then continued to hammer down the 2nd closest gravel road to West Asheville (that I know about) but almost immediately had to stop because my bike mounted light came loose from it's velcro attachment and suddenly I had 900 lumens staring me in the face. I couldn't see a thing so an emergency stop was absolutely necessary. Luckily I had some duct tape with me to reattach the lamp. Why did I have duct tape with me on a road ride? Don't ask. As I was descending I thought about the old book of half truths where he mentioned climbing 5000 to Soencer/Trace. He said something like, just before the top you'll start to wonder if the descent is worth this hellish climb, believe me, it is. Well, the same can be said about any climb to Webb Cove. Webb Cove is worth it. Hairpin turns, washboard surface, smooth as glass gravel straight aways, the Droid says I got going 40.2 mph at some point during the ride, that must have been where.

Once on Beaverdam and headed back into carland I had a very skeeered driver tailgate me for almost a mile. She wouldn't pass no matter how many times I waved her around. I had to actually get off the pavement and ride in the shoulder before she would go around. I swear, I know she was just trying to be safe... but in reality she just didn't know how to pass a cyclist and she made the situation much more dangerous than need be. Why don't they teach how to pass cyclists in driver's ed.? Anyway, she got around and I took Merrimon to UNCA down to the river and my legs felt great. I had all the power I could ask for, every time I asked. Past Richmond Hill, past the cattle market, and up Waynesville went by like a flash. I pulled in to the house just before 10pm. 1:56 total time out. 1:44 moving. Not bad!
Posted by Eric Wever at 7:11 AM 1 comment: