They're gonna Toon the Moon!

Or to translate from Fehrese: China is about to crash a space module into the moon in an attempt to learn more about the viability of turning it into an interstellar gas station. Then of course they will need housing for the workers, and roads, and infrastructure, and Schotzkey's! and Starbucks! Oh the irony, a Starbucks on the moon. Oh, and the bees! Wi-Fi is f'n with the bees and the bees pollinate our crops so in turn Wi-Fi is going to create a worldwide famine! Where else can ideas roll off the tongue with such fehrvor and belief without the slightest hint of smugness even when saying 'I-told-you-so-three-years-ago-and-tomorrow-I'll-send-you-the-link' than on a ride with great friends at Wilson's creek? I'd say the places are few and far between.

Scott from Indy arrived at my house at 7AM yesterday and we were on the road a few minutes later to caravan with Johnson and JutRut from exit 59 to the concrete bridge where our vehicles rendezvoused with the dirty box from Charlotte with Dicky, Big Worm, Stabby, and Bubba. Our plan: The Raspberry->Greentown->Raider's->Sinkhole shuttle. 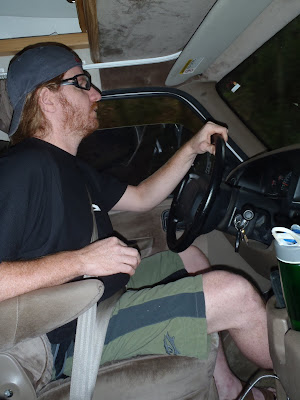 The shuttle went smoothly and we lined up for Raspberry: Jut, Johnson, and I in front Dicky following, then Stabby, then the rest. We checked up at the 1st turn then railed to the dirt field. Just as Jut, Johnson, and I were recovering from the whoops and hollers and high fives induced by the killer way to start the day Stabby arrived to let us know Dicky had eaten dirt. The handlebar of the brand-new Highboy i.e. Eric catcher had snagged a rhodo and tossed him head over heels into the rock strewn overgrowth.
video swiped from Dicky's bloggy.

When Dicky finally arrived his ankle was already swelling to multiples of it's normal size and he was moaning while just standing there. That's not a great way to start the day, Rich. 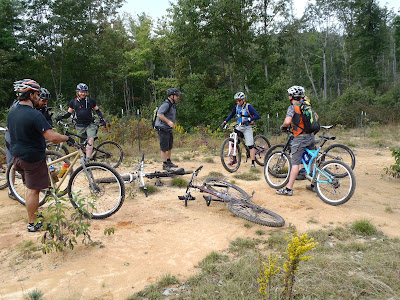 With my helmet camera on the ride (video later this week) we continued despite Rich's obvious pain. Jut and Johnson cleared the creek jump,

Press the arrows button to make the video larger

Jut on Raspberry from pisgahproductions on Vimeo.

and we all settled in for the first climb of the day, back to 181/Greentown. I hung back with Stabby and Bubba to not wear myself down during the warm up and we all arrived in good time.

Jut, Johnson, and I took the lead for Greentown and it must have been one of the faster descents off that hill that I've pulled off in a long time. I felt right on the edge of control as I held Jut's wheel and watched as both riders ahead launched off every waterbar, pile of rocks, invisible to me source of springboard all the way to the creek. Again, I was feeling on-fire and the tech at the bottom felt easier than ever. It may have just been that I was following those guy's lines, maybe my vampire eyes were just tuned in.

The group of 8 crossed the creek and were headed up the old-toll-esque climb that follows Greentown. The group splintered at that point with Big 'SS' worm setting the pace. I was pleased to round the corner just near the top of the climb to find Jut, Johnson, and Scott from Indy climbing down to the waterfall for a quick breather/lunch break. I had passed by that beautiful spot the last few times and it was nice to take a break there. There aren't many views on this ride, why not take them all in?

shortly after this photo I broke my chain. It was an easy fix. 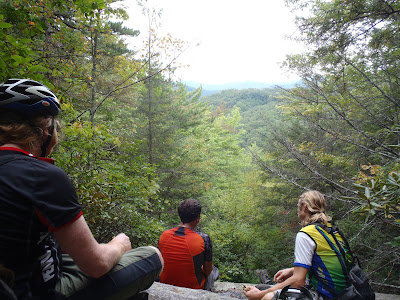 We regrouped and were onward to Raider's next. Again, with the camera rolling I followed Johnson and Jut down the descent. The top of Raider's is just about as fast and smooth as a trail can get. I was reminded of Trace maybe? and we stopped at the spur to the Harper's Creek overlook... or this the old road to NW Wataguga County? We didn't want to take the chance, even though Stabby (who hadn't been there in a couple of years) was confident it was the right way. When we got to the lower spur, however, he knew exactly where we were, and considering at least two of the group had not seen the overlook, and you know, why not take them all in? We rode in and took a quick break at the view of Harper's Creek Falls.

we shared the view with three high-spirited grey-haired hikers 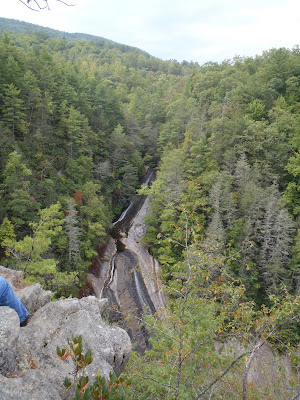 Lower Raider's is not like upper. Lower becomes a rutted out, rocky, chute filled, treacherous, fun-filled mountain biking dream land. Big moves abounded as the group make it's way to the second creek crossing of the day. Bees attacked the group and that got the lead out, we were all FLYING to the parking lot. Jut and Johnson even cleaned 'the steps' which actually are not steps at all but a death-to-the-right move I was unable to attempt. If you hesitate, don't go for it.

We regrouped then took in the cultural experience that is the Wilson's Creek Trading Post before starting the climb to Sinkhole saddle. 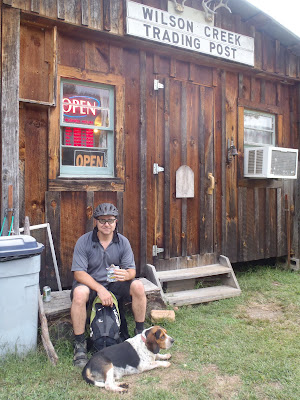 After about two miles of climbing I was spit off the back of the 'A' group and wallowed in no-man's-land between them and the 'B' group. 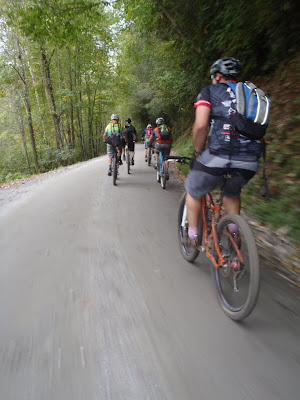 I was probably a minute back and Stabby and Bubba arrived two or three minutes after me. Up to Sinkhole took longer than I remembered and we stopped to take in the sad sights associated with a brand new logging project. 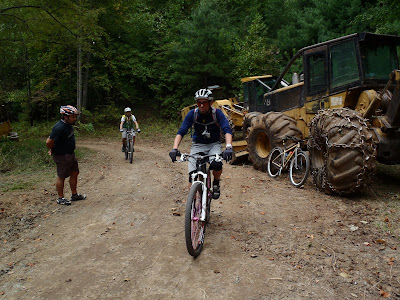 Big Worm and I took the lead to the top and everyone arrived they looked good and ready for the final descent of the day: Sinkhole. Oh by this point we had another rider along, Dicky's ankle. It had taken on a life of it's own and was the only one complaining. 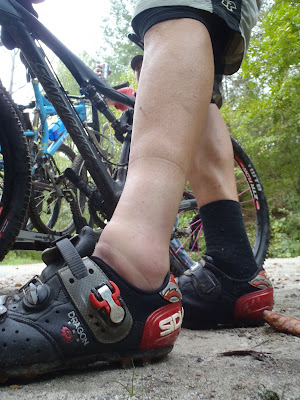 Sinkhole undulated up and down along the ridge before taking a dramatic drop. Jut and Johnson soared off the log drop with me in tow and Stabby just behind. That was a brand new technical trail feature for him and I heard the surprise in his voice as the ground dropped away from his wheels. Well that must have woken up a special part of his brain dedicated to big moves because he was ready to jump the sinkhole once we were there.
(I missed Stabby but did catch Johnson and Jut)

Jut and Johnson Sinkhole from pisgahproductions on Vimeo.

Down the chute then with no regroup Johnson, Jut, and I hammered through the knife's edge lower sections of Sinkhole all the way to the road.

A hundred yards later we were at the shuttle and saying our good-byes and loading up for our return trips to Charlotte, Asheville, and Indianapolis. What a great way to spend the day. Thanks for coming out everybody. Let's do it again soon.
Posted by Eric Wever / Pisgah Productions at 7:05 AM 3 comments: