This afternoon I had to head out to the Ranger Station to drop off some paperwork and decided to get a quick ride in while I was out there. The All-Road bike has been fun lately so I grabbed that and had a couple routes in mind. The visit with the Ranger took longer than expected so I decided on the shorter route: 477->276->475b->475->276->477. 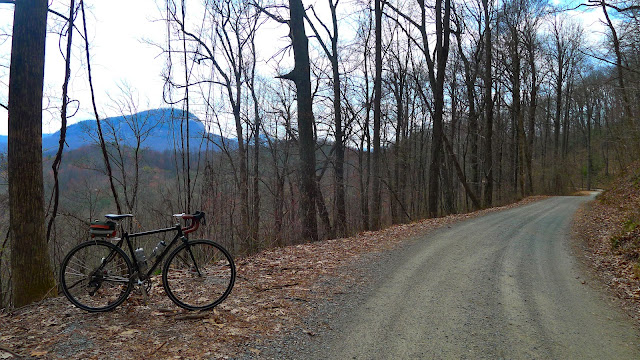 A few quick notes: The warm up on 477 was much MUCH easier than a couple of weekends ago during TMHTE. I was at the top with very little suffering. The descent to 276->475b was exhilarating and I caught a nice little bit of air by nose popping off a rock that is set in the road way. I was feeling great during the climb past Case Camp on 475b and the turn to 225 came upon me quickly. The descent to the Fish Hatchery was balls-to-the-wall wide-open spinning-out the 53/12 and I had to repeatedly remind myself to not cut corners because a vehicle could be hiding around any of those blind turns. Finally, the pavement back to 477 flew by. I was standing and hammering and feeling absolutely great. What a great afternoon on the bike. Temps in the mid to high 70's, a few minor threats of thunderstorms, and the roads almost completely to myself. 20 miles even, 3428' climbing, 12.3 mph avg, 41.5mph max.
Posted by Eric Wever at 4:33 PM No comments: