I just walked in from the first real winter ride of the 09/10 season.
DjD and I rallied at my house at 10am with temps in the 20's and gray skies. We drove to Yellow Gap in the Jeep and I proposed a different route than we had originally planned. After some discussion about food and clothes supplies Dennis was in for the longer ride. The route for the day: From the Laurel Mountain trailhead->1206->Slate Rock/Pilot Cove->No Name->Pilot Rock(up)->Laurel Mountain back to the Jeep.
The 1206 start down to Bradley was cold as hell and the turn into the loop was welcomed since it started the first climb of the day. 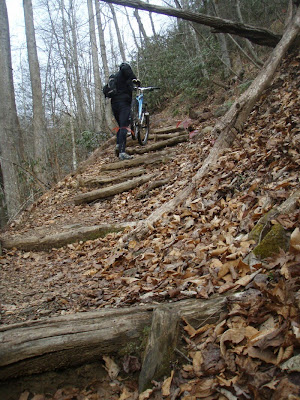 Dennis asked early on if this trail was steeper than Laurel up and I said No, but wondered to myself if that was the truth. The climb is pure Pisgah singletrack: Courdaroy, Steep ups, Rocks, Roots, and water ! water! water! The water has truely returned to Pisgah. 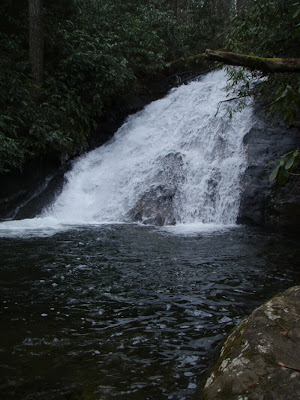 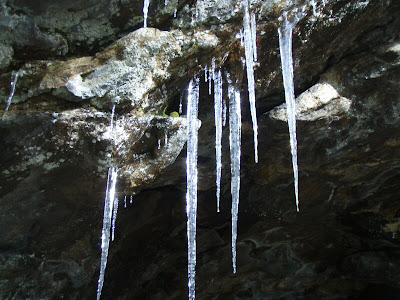 Anyway, over the creek and up to the turn to the rock overlook was next and I started to feel great on the tech climbs. We took a quick breather at the turn, and next was our first real descent of the day, down Slate/Pilot to NoName to Pilot Rock. I was hauling ass on NoName and had one of the harder crashes that I've had in recent memory. I came across a log hop/step down to flat and on the landing my underair'd fork squished to bottom-out. I'll just say that I didn't expect the sudden... change in geometry and I slammed into the saddle, highsided on the rebound, and after landing off the bike, off the trail, and on my right elbow, shoulder, and errrr lobe I was down and well, it took a few moments for me to get up and out of the mud. 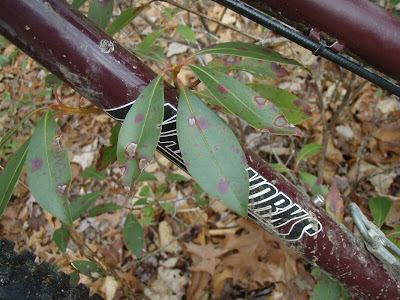 Next was Pilot Rock up. It was DjD's first time on this route and I told him at the bottom: 45 minutes if you stay on the bike. Well, I rode absolutely as much as I thought was possible, Dennis walked faster than the average bear, and we were at the HumVee/FirstOverlook/SecondOverlook/FalseTop/Top much faster than either of us had expected. 30 minutes? We saw our first other humans just before the top and just before the snow. Snow covered the entire connector trail and down the $2000 descent.
I've been down Laurel probably 50-100 times. Dennis had never done it before. It was awesome to hear descriptions of the trail, conditions, equipment, everything from that perspective. I would point out a landmark, or we would regroup after a super fast descent, 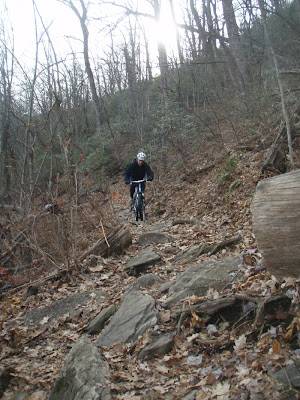 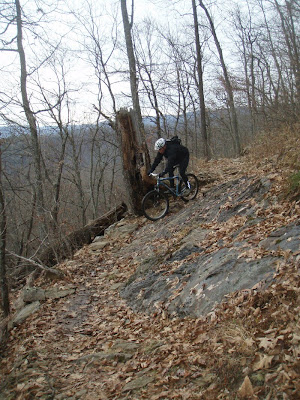 and adjectives rolled off his tounge like Awesome. Fantastic. Spectacular... 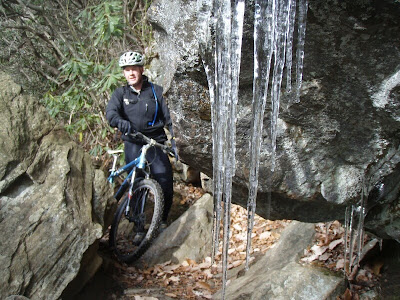 and other exclamations flowed as well like Holy Shit! Wooooo! and this is my favorite trail! Needless to say, the descent back to the Jeep was filled with high speeds, tech moves, big views, and big eyed wonder. I love Pisgah. 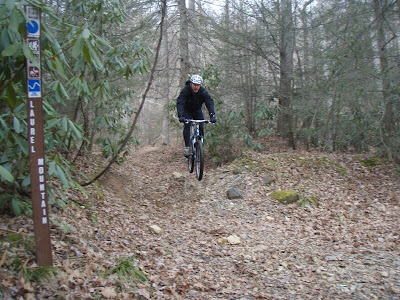