'Challenge' may not be a harsh enough descriptor... 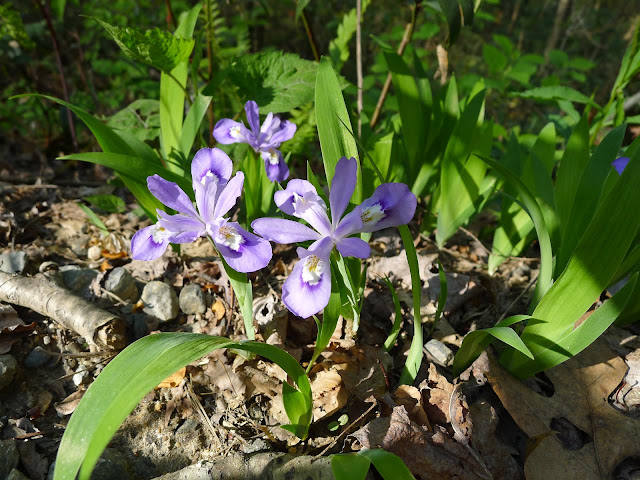 The ride started with the tough warm up of 477. I kept the pace low, knowing that I was in for an adventure, and despite that I was at the gap in pretty good time. I had already drained a full waterbottle by the time I made it to the Pink Beds so I stopped there to chug my second bottle and refill both of them. The picnic area was surprisingly empty except for this couple who were having a great day of their own: 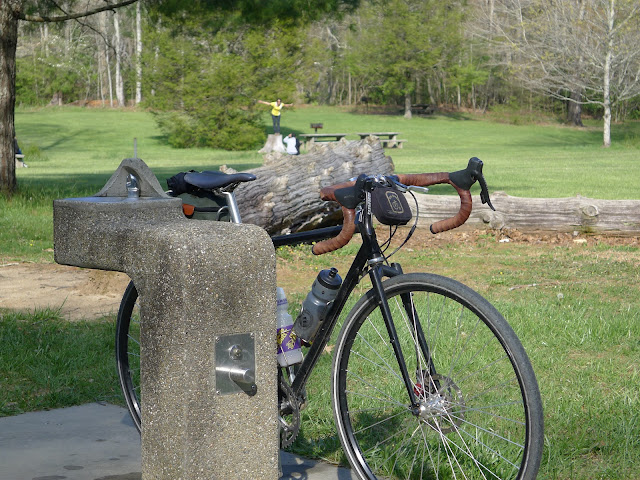 The climb up 276 to the Blue Ridge Parkway was rather painful. It had been a year or so since I've climbed that grade. Along the way I started to notice numbers painted on the roadway. I took note at about 105 and the numbers were painted every 100 feet, in descending order, all the way to the top where they hit zero. 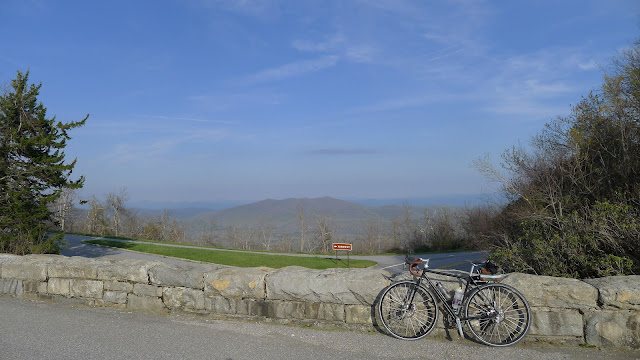 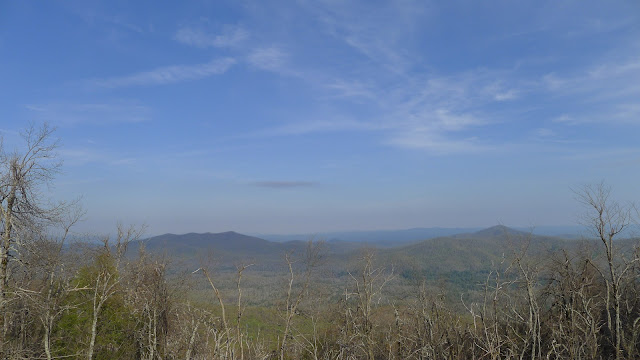 I don't believe I've ever climbed the section of the parkway all the way from 276 to 215 before. I've hopped on at Seinard and Shuck Ridges but not Wagon road gap. I was happy to get to the overlook that I had seen from 276 though. It was something I had seen from far below and it was hard to wrap my mind around the fact that I was going to be WAY UP THERE in just a little while. 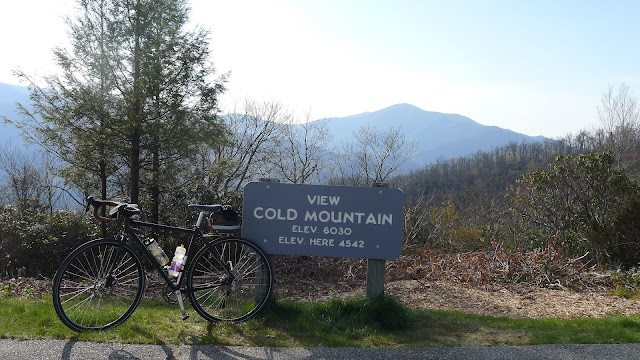 Then I could see in the distance, and much higher up, another overlook. Then I'd get there and see another. and another. The climbing was NOT near done either. Pilot Rock in the distance: 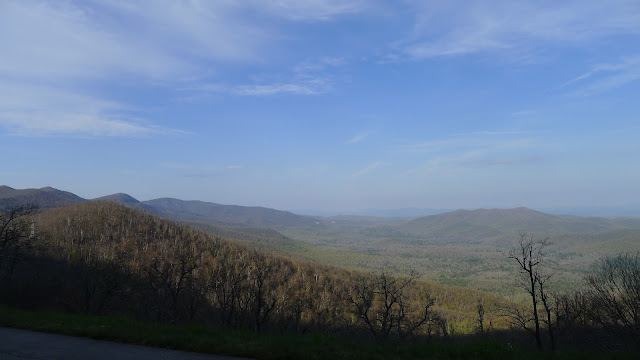 I got a text from Erinna asking for an update and I texted back 'almost at 215' when I was only at the Pounding Mill Overlook. I soon realized I had made a mistake and was no where near 215. My bike fell over while I was taking a photo and bent my derailleur hanger. It took me about a mile of poor shifting to figure that out. The chain would drop inboard and into the spokes every time I put it into granny. 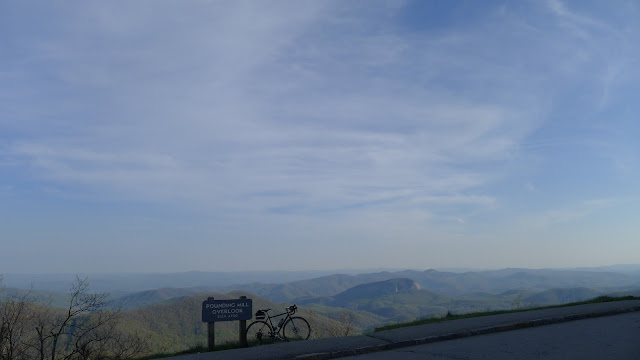 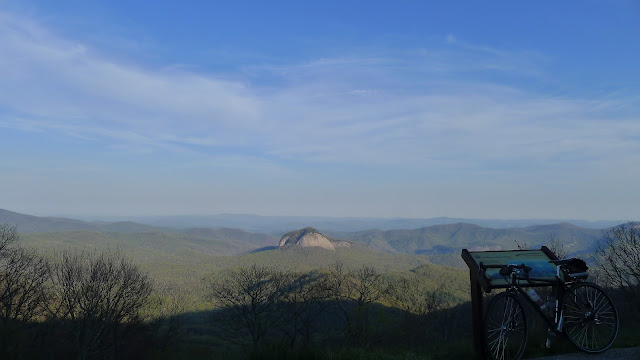 It had turned into a beautiful day. Temps in the 50's even at that elevation, high winds, and a very bright sun. I was also starting to bonk a bit. I was conserving water and not eating enough. The climb to Graveyard fields was excruciating. I got off to eat a few blocks and a motorcyclist stopped on the way down the hill. 'You alright?' 'Yup'. He looked skeptical. 'I saw you off down the road and you're off again now.' I told him about my mechanical issue and that I suffering. I also asked about distances. 'How far to Graveyard Fields? Balsam?' His answers were in single digits so I knew that I was home free after Balsam. 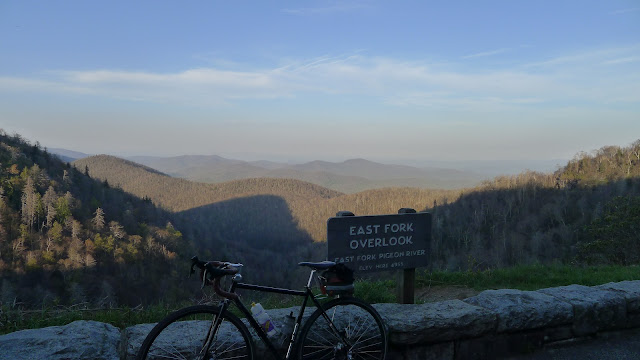 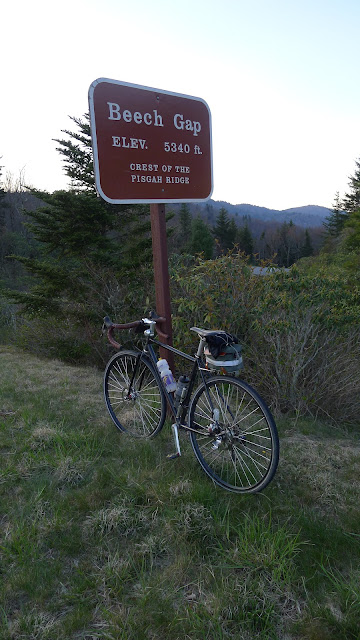 Well, not exactly. There were a couple more climbs I had not anticipated and on more than one occasion I second guessed myself and wondered if this was all just a bad idea. Then, as if by the grace of God, I arrived at 215. I stopped only briefly as the sun was already starting to set. 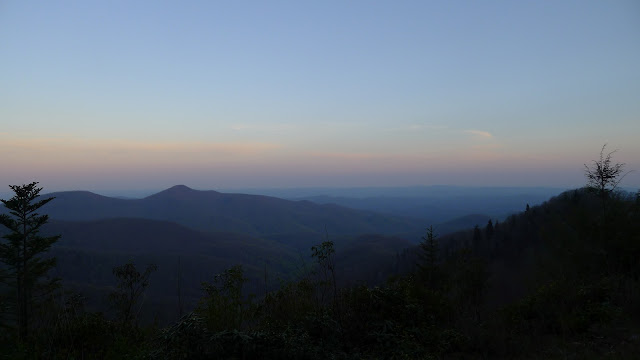 The descent was finally upon me. I relished in every moment and mile that I didn't have to pedal. The descent went on and on and on and soon I was back on gravel. A short climb (relatively) later I was at Gloucester gap. 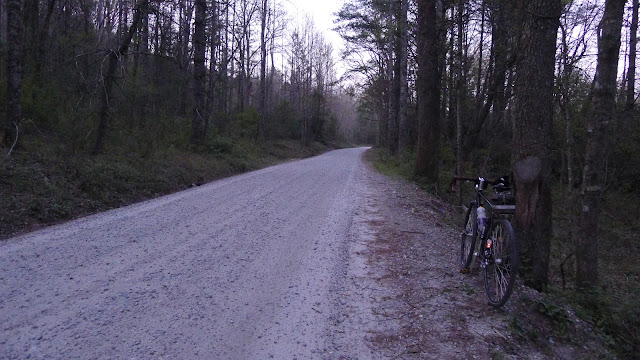 and headed down 475 to the Fish Hatchery. I was amazed at how tired my hands were and how fast I was letting myself go (simply because I couldn't apply more pressure to the brakes) and after one hard unexpected hit I flatted. The change took longer than usual because of my tired hands and the lack of tire levers. I though of Dennis 'Race Nazi' H.'s advice about changing tires and like a Zen master the tire was off and back on the rim in no time (well, I did get my second offer of assistance by a passing motorist so it must not have been that quick) 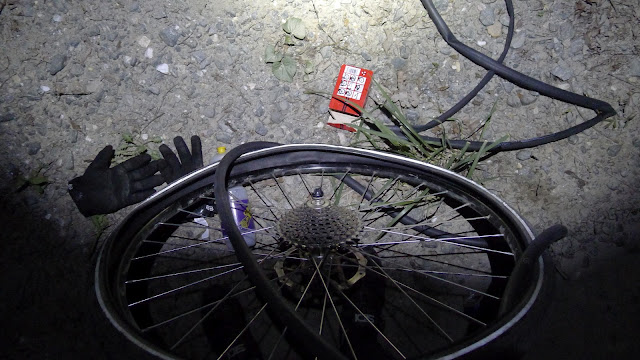 When the tire was rolling again I realized I was all the way back at Daniel Ridge already. I took Davidson River trail (singletrack descent or paved climb which would you choose?) then immediately was greeted by a police checkpoint  at the Fish Hatchery. I turned off my light and rolled forward. 'Everything OK Gentlemen?' and I was waved through with no questions. 475 to 276 was next and that 5 miles of pavement flew by. There is nothing like a paved-slight-downhill-grade to finish a huge ride. The Pisgah Monster-Cross Challenge is going to be a challenge, indeed. 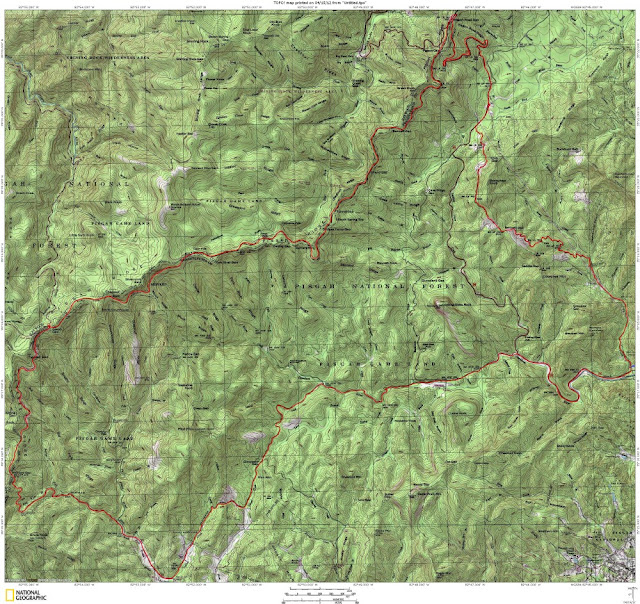 Posted by Eric Wever at 7:09 AM No comments: