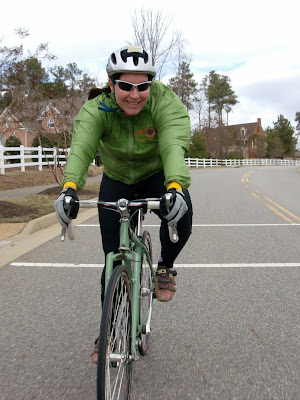 Erinna and I are in Williamsburg, VA visiting the family and we just got in from an excellent road+ ride: Mill Pond->Field Stone->Six Mount Zion->Mount Laurel->Ware Creek->Croaker->Riverview. Mt.Laurel/Ware Creek is a one lane olllllllld ribbon of pavement through corn fields and past old farmhouses. Beautiful riding. I guess it reminds someone of someplace else: 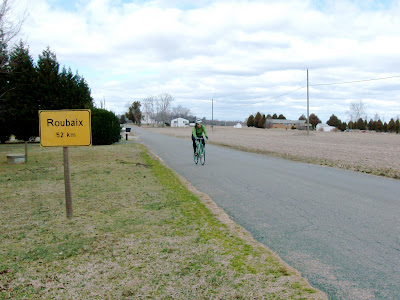 Then we went into York River State Park and hit one of the mountain bike trails there (I didn't catch the name but it was about 2 miles). Of note, this was the first ride Erinna and I have been on together since she was about 5 months pregnant! Anyway, it was a ton of fun riding the road bikes back in the woods. 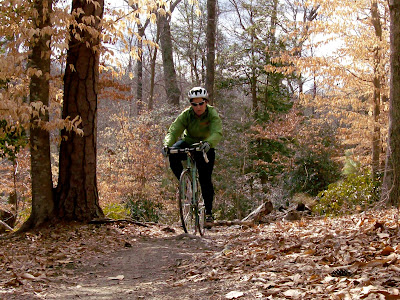 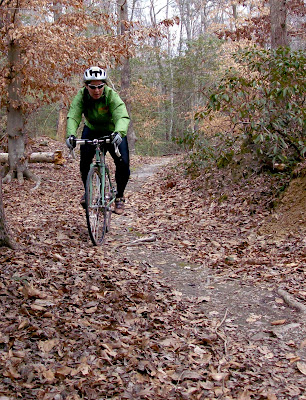 Erinna even commented 'Tell me again why mountain bikes have flat bars?' Yes, I too want a drop-bar off-road bike... After a quick detour to look at the river... 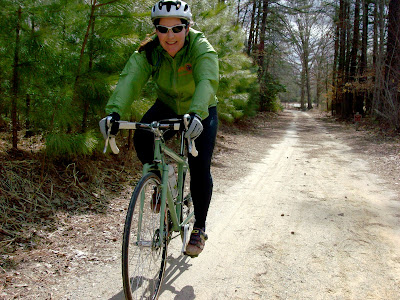 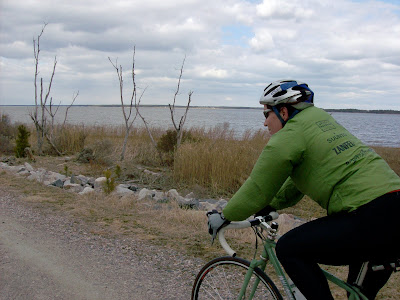 we left the park then rode: Riverview->Croaker->Ware Creek. Rather than turning onto Mt. Laurel we hit the gravel road portion of Ware Creek. 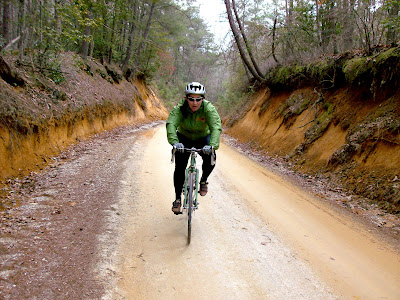 We are definitely mountain-bikers on road bikes, again the road chosen was the roughest. It actually had a few hills! Then back to Six Mount Zion and back to my Mom's neighborhood. Great ride with my sweetie in my hometown!
Posted by Eric Wever / Pisgah Productions at 2:56 PM 1 comment:

Yesterday afternoon I got out for a little runclub training. I took the same route as the last time: Hanover->State (up to/past pro-bikes)->Haywood->Ridgelawn->Wellington->State->Hanover (3mi 250' climbing )with Sophiedog. I didn't feel as fast as last time but I didn't walk at all. Sophie sure wished I had walked some. She wasn't feeling it after mile 2.
sunny skies, temps in the low 30's, and there is still a bunch of snow and ice on the ground here in West Asheville.
Posted by Eric Wever / Pisgah Productions at 7:30 AM No comments:

We'll see you crazies on April 2-3-4!!!
Registration is again open at active.com
Posted by Eric Wever / Pisgah Productions at 6:26 PM No comments:

Biltmore in the winter

Picture this: I'm sitting down with baby Zoe over my shoulder, burping her, and trying to one-hand-type-out a quick description of today's ride... Here goes:
DjD, Sophiedog, and I got out today for a very fast spin around the Biltmore trails. 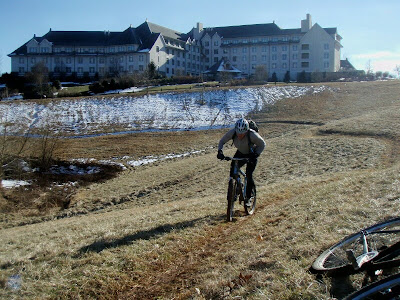 Black->Blue->Green. The trails were either the consistency of peanut butter or covered with 2 inches of snow. The only other tracks out there were those of one hiker, his/her dog, and loads of deer. The deer tracks were fun to spot because they took every other easy line through the woods than the trail we were following.
Black was a fast warm-up full of quick ups and downs, sudden turns, switchbacks, roots, rocks, and I thought I may lose my cafeteria lunch. 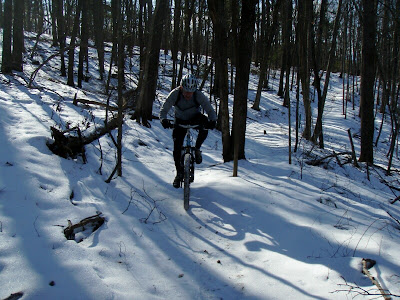 Blue was fast, fun, and flowy. Woody trails at their finest.
Green had the one hill that I couldn't clean and was over in a flash.
We were headed to Arbor Trace next but turned around because of the Antler Hill Village construction. I had time constraints and getting into and out of that area, twice, would have eaten up too much time.
Great after-work ride on a frozen (24*) and sunny day in Western North Carolina.
Posted by Eric Wever / Pisgah Productions at 5:20 PM No comments: 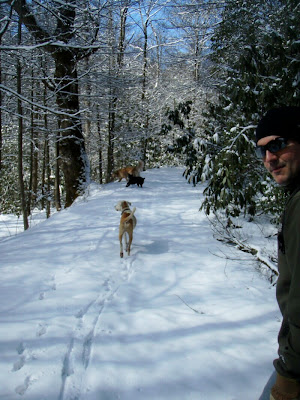 It is with great regret that we at Pisgah Productions must announce:
The 2010 Pisgah 36 will be postponed until further notice. After this weekends snow storm the course, as approved by the forest service, is unsafe and must be reworked and re-approved.
We are sorry for the inconvenience and are willing to offer a refund to any team that feels this is unfair or unjustified.
Once a reworked, rescheduled, re-approved permit is in our hands, and the 2010 Pisgah 36 is back on, we will contact each team with that information.
Posted by Eric Wever / Pisgah Productions at 4:30 PM No comments:

I just walked in from an interesting day in the woods. Mike B., Sophiedog, and I met Bill F., Rich D., and Eli D at the Fish Hatchery at 11 AM. On the way down 280 Mike was the first to comment on how much more snow was out there in the Mills River area than in Asheville. By the time we were on 276 and looking into the woods close to our destination the realization set in that we may not be riding in Pisgah today. Our 'ride' started on the pavement from the Fish Hatchery heading to Davidson River trail. Once on Davidson we were almost immediately off our bikes because of the snow. 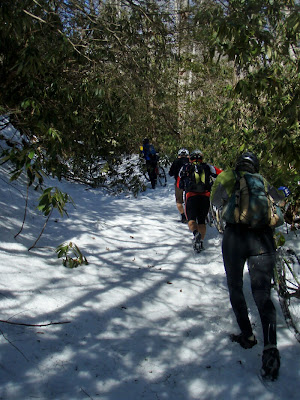 We all walked the entire trail except for maybe 100 yards. Out to the road and up the road to Cove Creek was next.... which we walked the entire length of to the camps. So we took a break there to talk about our options. That route had taken 45 minutes already. 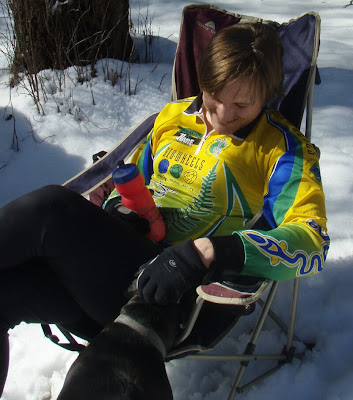 We then decided to walk up the connector (we knew we would be walking at least) to see if the gravel road to Daniel was clear at all. It was not.... 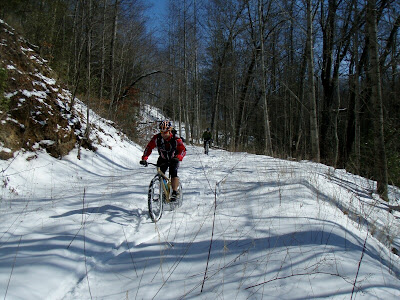 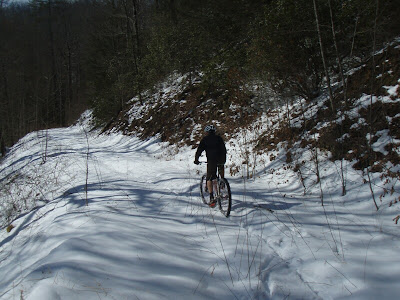 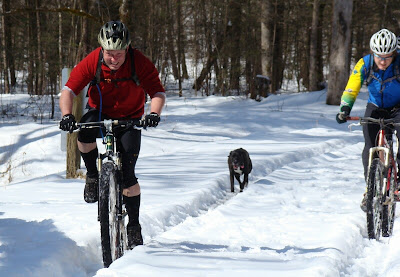 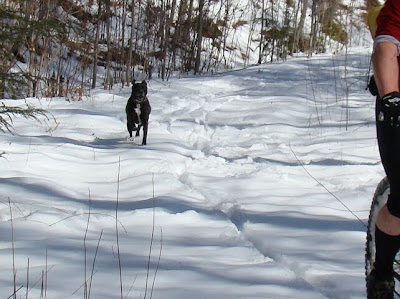 so we tried to ride as much as we could down to the bridge. Riding in 6" deep snow is far more difficult than I had imagined. Despite the conditions, morale was high the entire time out there. 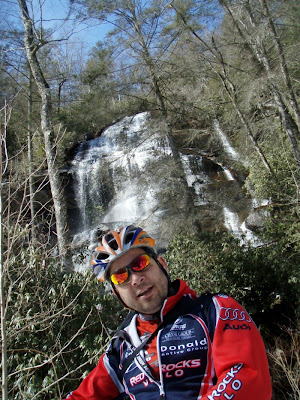 We then took the pavement back to the vehicles. 2ish hours out, 4ish miles covered.

What to do what to do what to do? How 'bout head back to Asheville and ride around and around in circles at Richmond Hill? Perfect. We were on the highway (sans Eli, we ate him.) and at the next trailhead in a little over 30 minutes. 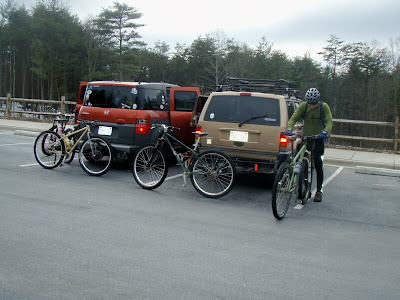 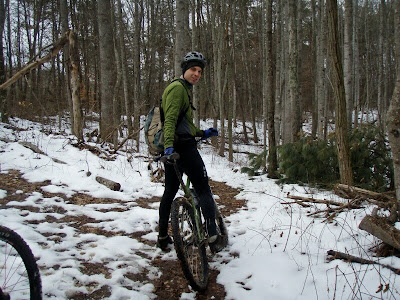 Rich was even able to get a little 'product testing' in: 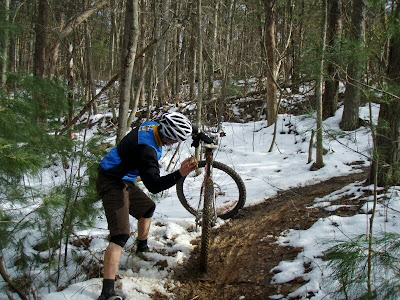 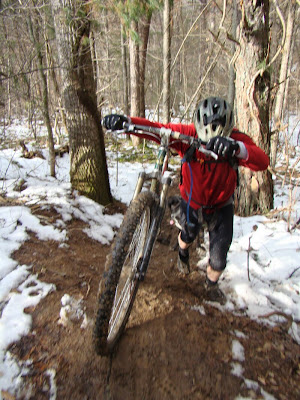 and exactly what I needed for the day: A good warm-up, a few good descents and tech moves, conversation with great people, and enough exercise to make me feel like I did a little something today. Thanks for coming out everybody!
Posted by Eric Wever / Pisgah Productions at 4:24 PM 1 comment: