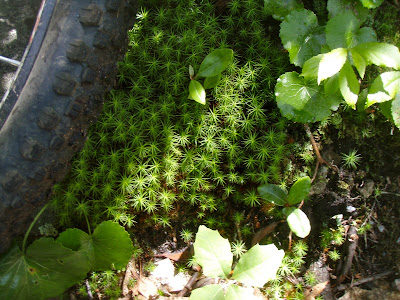 I just walked in from yet another excellent day of riding my bike in the Pisgah National Forest. Mike B. and Jody F. rallied at my house at 7ish and we were on the bikes at North Mills River campground at 8:24 headed for 1206->Laurel Mountain->Pilot Connector->Pilot->*walk*M2C->BRP->Big Creek->Reservoir Rd->Lower Trace->Fisherman's. One of the classics.
The pace up 1206 was a bit over my head and I needed a significant cooldown/breather/snack at Yellow Gap but once the dude on the motorcycle showed up and started talking our ears off it was time to hit the singletrack. Mike and Jody's pace slowed just enough once we hit the dirt that I kept them in sight for the entire trip to the meeting log. Jody had a spectacular unscheduled dismount while attempting one of the lower tech moves but he walked away unscathed. 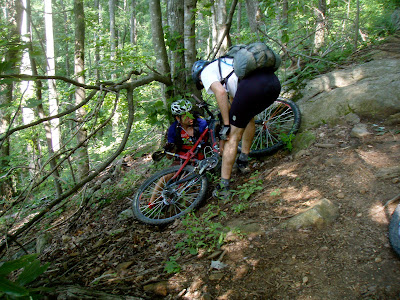 His bike, on the other hand, did receive a few brand new badges of courage. Have I mentioned before how much I enjoy Laurel Mountain trail? Yes? Well then let's just say today's climb was much like the others. 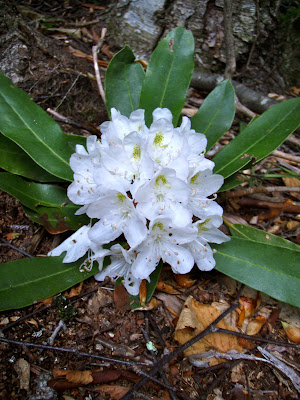 I was singing along with the music in one ear and laughing not only at Devenda Banhart's ridiculous lyrics but at how rediculously fun Laurel is. 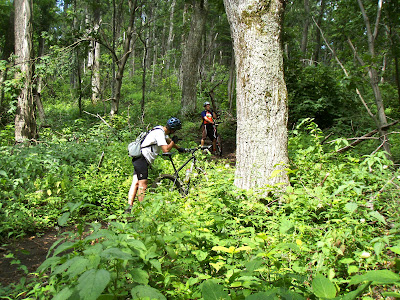 There was even more wind damage up at the top from this past week's thunderstorms and the open woods is providing ample opportunity for all sorts of thorns and the like to take over the trail. It's getting pretty overgrown right now. Oh, we stopped and used Mike's superduper badass GPS and identified the gaps along the way. Meeting Log=Rich Gap. Cairns=Sassafrass. Sassafrass=Good Enough. 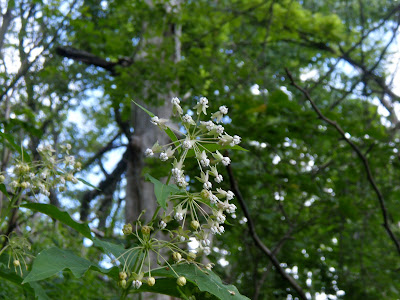 This was the first true Summer ride of the year and it felt like it. Highs in the low 90's with 80% humidity were what we dealt with but luckily the sun stayed hidden for most of the day. At Turkey Spring Gap I was dripping with sweat while we took another long cooldown/breather/snack and Jody commented on the scene: 'I.... I feel like I'm underwater.... or on another planet.'
Up Pilot was next and I took the lead for the first time of the day. 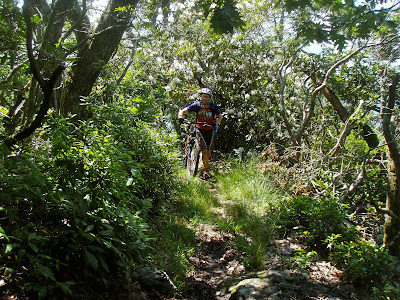 We pushed up and over while soaking in the views and stopped at the Pisgah Inn spigots for water refills and head soakings. Down the steps to the parkway and down to the Little Pisgah Ridge tunnel followed 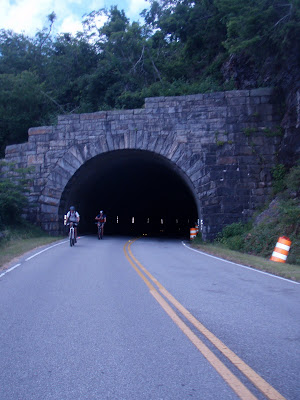 and I took the lead hiking in the Big Creek trail. The access trail to Big Creek is so overgrown right now that it's hardly followable. I've never seen it like that. Every step forward put my foot out of sight. I started to think about Clay's blog and how he has been seeing snakes just about every time he goes out and I just about freaked the funk out. I would push my bike into the underbrush, listen for sudden movements of that spine tingling thickathickathicka of a rattler, then move forward. By the time we made it to where we could ride again my nerves were frazzled. I took the lead for the descent though and made the best of it. There were trees down around every third turn and the trees and underbrush were so full and lush that it made for the toughest descent of Big Creek that I can remember. As Mike noted, there was no way to anticipate what was around the next corner, it was a ride of reaction, every move a reaction to what was in front of you RIGHT NOW. 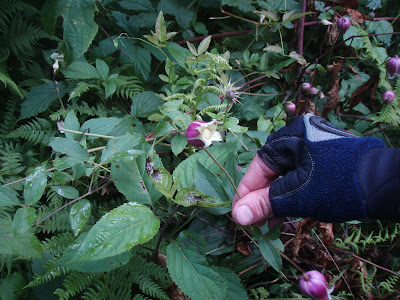 Excellent. It was also like riding Big Creek for the first time again. I kept Mike off my tail far enough that I feel great about that descent. We were fairly ahead of Jody, which is a feat in itself, but he was admittedly 'unable to get his mind on the trail'. At a pace like that it's no surprise we were off the ridge and headed down the creek in no time. I kinda lost my mojo down on the creek and let the guys get pretty far ahead of me at one point but that was just fine with me, we were still making good time. Big Creek is just about the most beautiful trail one can be on at this time of year, too. 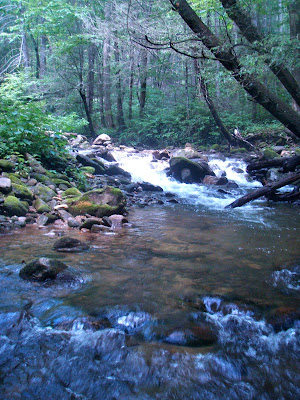 The water felt excellent at every crossing. Next was the climb out from the reservoir, which went by very quickly once we passed the couple with the polar bear.... (actually she had a pair of St.Bernard's). We were running from thunderstorms as we hit the Trace parking lot so we didn't stop there. Lower Trace is in rough shape right now and I had to hop off the back once to avoid going over the bars. Across the river to Fisherman's then a well deserved dip in North Mills River finished the day. Well, what really finished the day was the local color at the bridge as we left (we saw The Queen Bee)... but anyway... we were back at the notminivan in great time and able to meet everyone's curfews.
Thanks for coming out guys for a great day of classic Pisgah Rangin'.
Posted by Eric Wever / Pisgah Productions at 2:33 PM 5 comments: