Deep in the heart of Pisgah....

....the squirrels are white

I got out this morning with Sophiedog the Brave for a fun dog-friendly Pisgah loop: South Mills->Cantrell->Squirrel->Bradley-> back to Turkey Pen parking.

Sophie and I got started just after 8AM after I changed the ride plan en-route. I decided that a bit of deep Pisgah was a better choice than the inner-loop, for Sophie's sake. The singletrack down to the bridge was a great bike/confidence check and the flattish 5K or so of South Mills River was an enjoyable warm-up for the both of us. We took a quick break/photoshoot at the Lodge then proceeded up Cantrell. 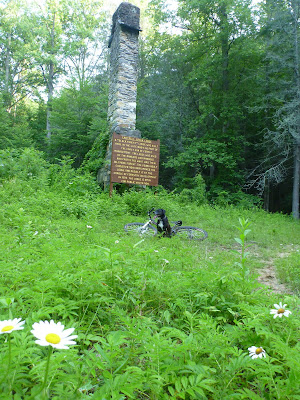 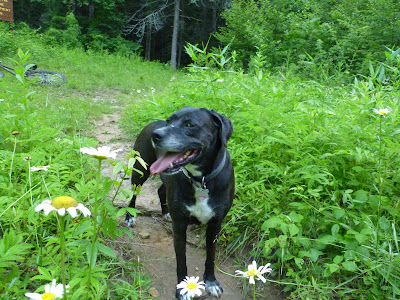 If you've never done Cantrell up you're missing out. The trail never gets too steep but it is tech tech tech all the way to Squirrel. The water was surprisingly low so I even smashed my way across a few of the creek crossings. It was turning into a beautiful last weekend of Spring day. Temps rising out of the 70's, a bright blue sky, and the sun was still at at lower angle than I'm used to seeing in the woods since it was only 9:15 or so when I hit Squirrel. 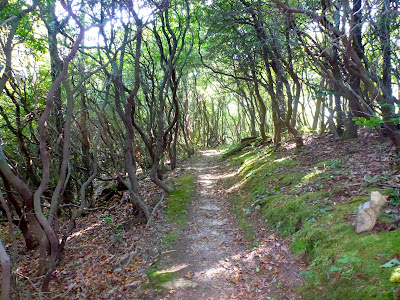 The stretch of Squirrel from Cantrell to Laurel Gap is one of my favorite. Classic Pisgah at it's best, even after the trail work. Some of the tech features are gone but the flow is out of this world.... and it's still beautiful and tech.
Sophie was starting to feel the lack of rides somewhere around Poundingmill and I had to let her catch up again and again. At least she's not the type of dog that runs until she absolutely collapses, she slow to a trot, shows up with a smile, and soldiers on to the end. Good dog.
At Pea Gap I decided to head down Squirrel rather than Mullinax just to get to the river more quickly for Sophie and when we arrived she was grateful. 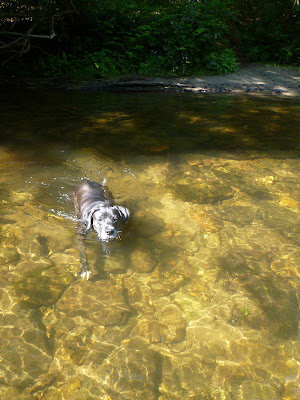 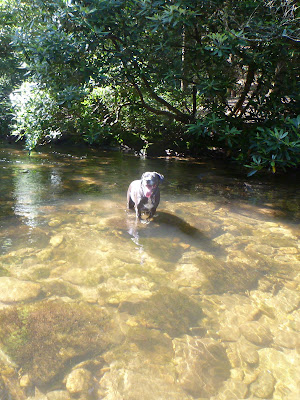 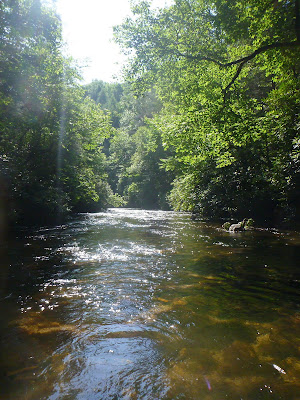 A slow spin on Bradley was followed by my best attempt at climbing the singletrack back to the parkinglot that I've accomplished in a looong time. I almost cleaned it. The sweat was pouring off me when we arrived at the Jeep and whattayaknow, Kris and Ariane K. were just starting a ride of their own. Did you just go swimming? Kris asked. Nope, just finished an awesome ride.