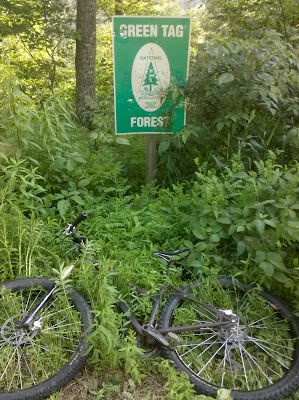 The cast: Big J., Kim S., and myself. We started with 1206 to the first gravel road on the right. J noted that it had been years since he'd been up there and Kim was amazed that there was riding up there at all, she had never seen that part of the forest. The climb went by quickly as Kim set the pace and J and I tried our best to hold on. 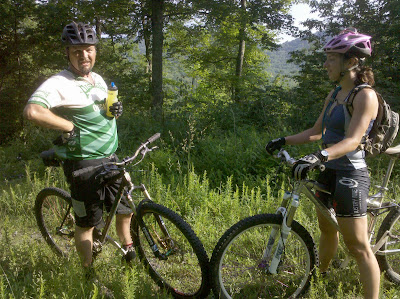 The descent on Yellow to N.Mills followed and I took the lead. Soft corners, slimy mud, high speeds, and spooked horses highlighted that trail. Like J, it had been years since I had been back there and I was amazed that it took so long to get there again. It looks like the trail is rarely used by cyclists. The surprise in the eyes of the equestrians and their steeds reinforced that feeling. I had to make an emergency off-the-back style stop as the lead horse in the group reared-up about 50 feet ahead of me. 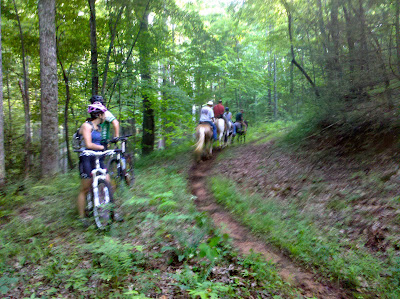 N.Mills River trail crossed said river a couple of times (the first crossing was easily crotch deep) and right when J was asking 'where does this go again?' we were at the bottom of lower Trace. I dropped into my granny and took off up the climb. J and Kim both noted that they had never gone UP lower Trace and I think they were questioning my route choice but by the time we had hit Wash Creek I could see they were having a grand 'ole time with that beast of a technical climb. Wash Creek to 5000 followed and the climb up 5000 was, again,due to Kim being off the front, over in a flash. She is an animal. Left onto Spencer where Kim took off again but was soon waiting to see my line up the clayhill (she had already tried once). My line was no better but I had some sage advise: 'Hit it hard!' Which J did.... and Kim did..... without much success.... 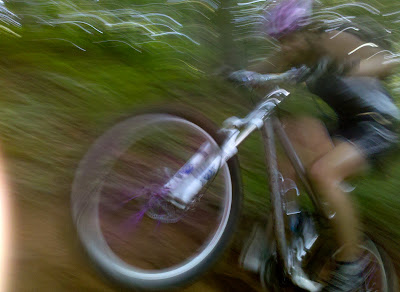 Kim hopped in front again and motored up through the steep field and onward towards Trace ridge. I would catch glimpses of her ahead and of J behind but other than that we basically were three solo riders making our way to the ridge. Actually, we regrouped once along the way and I thought I was going to pass out. ooh... aahh... sparkly floaty dancing lights in the sky.... It was turning into a f-a-s-t ride.... (as juxtaposition, here's a shot of a Trace Ridge resident we came across later): 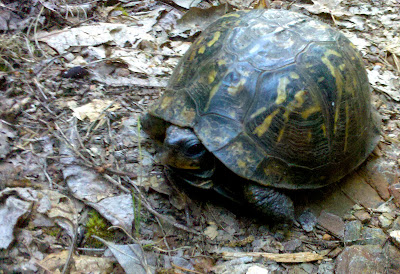 Once we were at the very top I got out front and put the pedals down. I hit a great here-to-there launch on the first downhill section and that set the tone for the rest of the descent. We would regroup every so often to ensure everyone was OK and still got to the bottom in less than 10 minutes. With J following me I took some of the faster lines that I've found in a while. He mentioned that I was floating through the rough stuff and well, it felt like it. I was having a great day on the bike. Focused. Strong. Light. Add in a perfectly functioning machine and you have a recipe for HIGH SPEED descending. A quick reprise at the parking lot then Lower Trace was next. the three of us picked our way through the rough, nasty, steep, slick, rutted mess that is lower Trace all the way back to the river with great success, then crossed the river:
(beware: f -word content)

and were back at the vehicles moments later. What a great way to spend an afternoon. Thanks for getting me out there J! Great to meet you Kim! 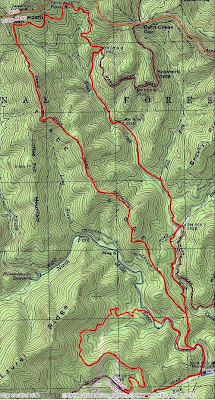 Posted by Eric Wever / Pisgah Productions at 5:44 AM 4 comments: