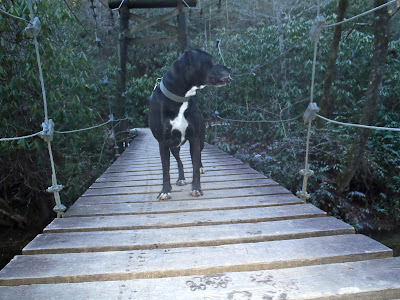 and yes, now it certainly does. Yesterday afternoon I got out for a little dose of Pisgah. Sophiedog the Brave and I arrived at the Turkey Pen parking lot at 4:45 with the plan of an out-and-back on Squirrel. I was hoping to catch sunset at the furthest out point so I had lights along. Just after the bridge on South Mills River I knew the ride was going to be interesting since there was a sheet of ice making it nearly impossible to even make it even to South Mills. I knew then that the ride was going to filled with ice or mud every foot of the way. Up Mullinax was a great warm-up despite the thick mud I had to slowly churn through. 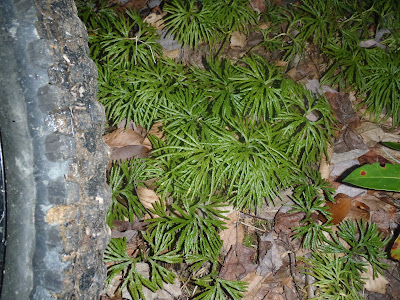 I turned onto Squirrel with the intention of scoping out the trail redo but immediately found that I had to concentrate of every dip, turn, climb, or trail obstacle along the way. The trail work was hardly noticable but what I did see was that I probably shouldn't have been out there. The trail still needs to recover from the snow. There was either a ribbon of ice or two inch deep mud covering the majority of the trail. It was slow going and the landmarks took forever to reach. I wasn't feeling very motivated but decided that at a minimum I was going to Cantrell Creek. Well, to my surprise after Laurel Gap the trail was in much better shape and I was happy with the choice to soldier on. The trail work became more apparent and I wholeheartedly approve. Good work guys.
When I arrived at Cantrell 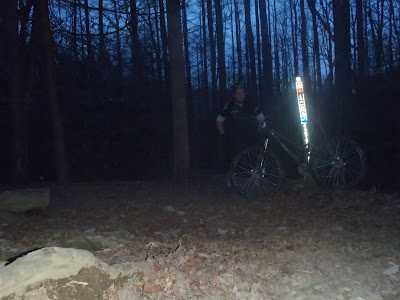 the sun had set and it was time to light up and turn around. With hardly a break Sophie and I were headed the way we came but within a minute my light turned off. Wha? Click Click.... nothing. Well, I had put both batteries I had with me on the charger at the same time and both batteries blinked their happy green light saying 'yeah! I'm charged' so when the main battery died a moment after it turned on, I panicked. Will the second battery do the same thing? How much time do I have on full burn with that tiny battery anyway? I quickly decided that retracing my steps was not going to be a good idea and that I needed to get off the hill IMMEDIATELY so I turned around and before even trying the backup battery I was descending Cantrell Creek. At the first creek crossing 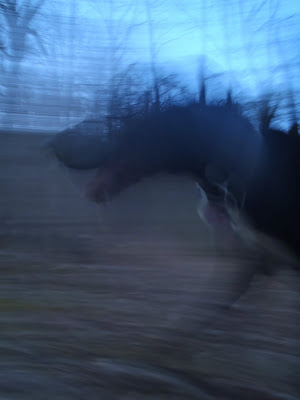 I could no longer see so after a quick prayer I turned the small light on with the small battery. I was shocked at how bright that little thing seemed deep in the woods. I needed to get out of there though so with a new since of a fire under my ass I put the pedals down and hammered down that rocky, wet, down tree covered, deep DEEP in the heart of Pisgah trail. I knew that if I made it to South Mills I was home free, that I'd hardly even need a light once I was down there. Well, I made it off the hill (and across the 5 wide creek crossings) without another light issue and after a quick photo of the lodge I was rolling back towards the Jeep. 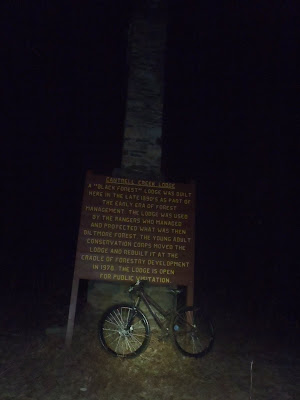 It took me a minute to start to smile and think about what I had just done, Cantrell Creek is a blast, even when in a panic mode. It was no longer a time to panic though, it was a time to reflect. As I was making my way back on South Mills I caught a glimpse of what I first thought was a huge rising orange moon. No, what is that?? Someone had a HUGE campfire roaring up on the hill where I don't know of there even being a trail. I was looking up the hill at the fire to my right, not paying attention when suddenly it felt like I had been kicked in the leg by a horse and I was laying flat on my chest with my bike on top of me. Moving at no faster than 5mph I had run directly into a cut off branch of a downed tree and it stopped me dead in my tracks. I got up and thought about the folks up the hill camping and what they must have just seen. A single light moving steadily along and then an audible OOOMPH! and the light stopped. Anyway, I quickly got up and started to hammer. Sophie was game and I just wanted to get out of there before the pain really set it. 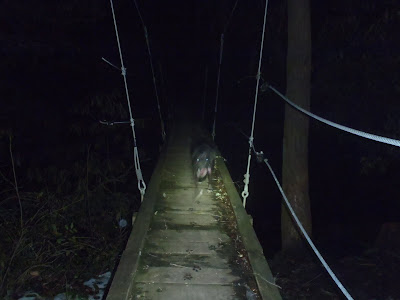 I ended the ride by climbing the singletrack rather than 66 jumps and was headed home2 hours and 32 minutes after I started. I texted Erinna to let her know I was out of the woods and that ended up being a great idea on my part, she had a delicious dinner ready and waiting the moment I got in. Awesome. Thanks for pushing me out the door Erinna. I needed an adventure like that. I needed that ride. Droid Stats: 11.29 miles, 2933' climbing, 2:02 moving time, 2:32 total time, 5.5 mph average moving speed, 16mph max. (hmmm... interesting, when I load the gpx file into Topo I get different stats. 10.9 miles, 1680' climbing. I wonder which is more accurate.) 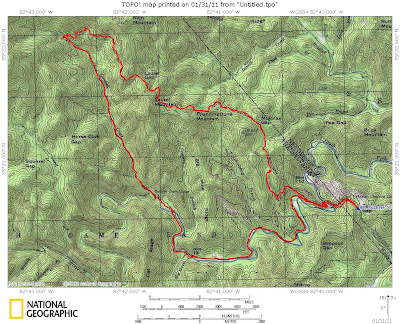